SWTOR - The Mandalorians, an army or a horde? 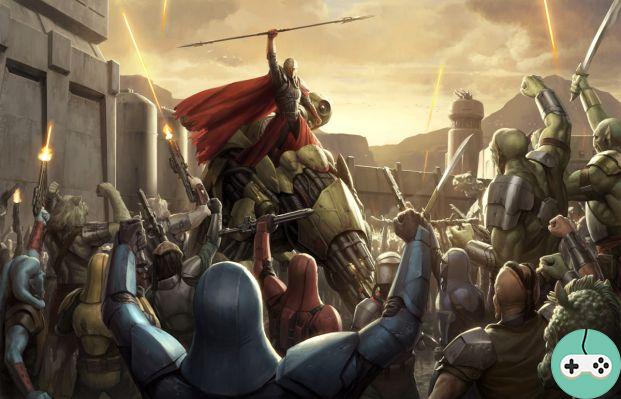 Infantry, Special Forces, Fleet, Hunting ... Whether for the Galactic Republic or the Sith Empire, the military structure is very defined with sections that cover particular areas and do not overlap. Or for very specific exceptions and also very codified. Their structure is not pyramidal, but in separate branches where the officers of one have no power over the subordinates of the other. It is very far from a barbarian horde, where all commanders and officers have skills in all these branches.

Like the Mandalorians, who at one time were dropped from their carriers on the backs of Basilisk droids on whom they fought indiscriminately in space, atmosphere or on the ground. Each of their warriors is a commando capable of getting out of many different situations. The complete opposite of an ultra-specialized base soldier (be careful, I am not talking about the soldier class where one is supposed to embody an elite commando and therefore the equal of a Mandalorian). Additionally, Mandalorians do not have a base unit. If we talk about their clans, it is not for nothing. They are thus gathered around extended families of varying numbers (from less than ten to a hundred), and which evolve easily. Each has its own rules, with an internal hierarchy that is specific to it. Lacking a central government for the last three centuries, these clans have followed their own paths without concerting and the differences have widened. 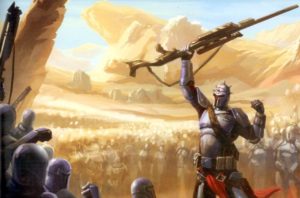 Three hundred years ago, during the Mandalorian War, the clans had experienced great upheaval with the addition of a lot of members that we called neo-crusaders. Coming from diverse and varied backgrounds, it took special measures to integrate them all. Mandalore the Ultimate strategist Cassus Fett, himself a recent member, came up with the idea of ​​displaying ranks as the color of armor. There were four of them, it shows how their hierarchy is flexible and undeveloped. But their final defeat saw them plunge into a dark period of three centuries, despite the efforts of Mandalore the Savior. It was during this time that they lost their Basilisk droids, destroyed by the Republic. The color code imagined by Cassus Fett was immediately scanned. Certain clans, like that of the Farr and others deployed in particular on Dromund Kaas, took again these four colors or sometimes only a part. Others ignore them completely and do not seek to display this visual unity. The Lok clan of the current Mandalore (visible aboard its flagship the Spirit of Vengeance, only for bounty hunters), for example, is part of this second category. 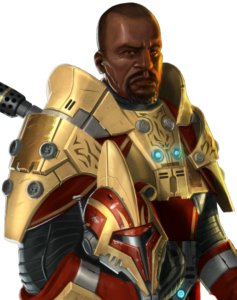 Mandalore is at the very top of the Mandalorian hierarchical pyramid. It is the only one that did not have a particular color in Cassus Fett's system. After all, all of his warriors are supposed to know what his armor looks like. He is the chief of the chiefs of clans, and therefore as such he is, like them, military chief and judicial authority. He is the supreme judge for the most serious trials. As the chief general of several mercenary groups (each clan separately), he can choose a target or contract and all Mandalorians will join him. However, he remains very accessible to any member of the clans who would like to present him a case. On the legislative side, its culture is based more on traditions than on regular renewals. He is usually content with the role of arbiter and only imposes big changes if the situation is really serious and necessary.

The current incumbent is Artus of the Lok clan, says Mandalore the Innocent. He took this title by killing in a duel his predecessor, Mandalore the Small. He denounced the latter's alliance with the Empire, but then made another. His troops are essential in Kaas City and its surroundings, and have participated in the last campaigns since the resumption of conflicts at his side (Taris, Corellia ...). He personally fought on Ilum, during the Darth Malgus rebellion. It remains very secret, however, and many observers believe he has several cards up his sleeves that he expects to play when the time is right. 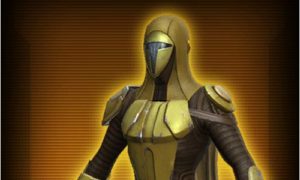 Below Mandalore are the so-called Marshals. They wore yellow / gold armor in Cassus Fett's classification. These fall into two categories. On one side the clan chiefs and on the other the high command. The former, chosen internally from the different clans, perform the same function as their superior. Each of them is the supreme leader of his clan, in terms of the laws of war and justice. To entrust one of them with a mission is to commit his whole clan to it. Achieving this status certifies being able to automatically sit on the board of Mandalore.

But there is another way to take your place among these advisers. There are those whose talent Mandalore recognizes and appoints in his entourage. Benefiting from this privilege in a personal capacity, they have no one under their orders. And if they are to complete a mission as a group, they must seek permission from their personal clan leaders to provide assistance. They can also provide them with a permanent command if they are on (very) good terms. But the lack of responsibilities with their clans allows these favorites to be closer to their supreme leader, and more free to exercise his will. Some have already been granted very great powers. For example, three hundred years ago, Cassus Fett had the authority to lead all armies without anyone except Mandalore being able to challenge him. 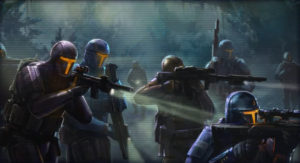 The next rank within the clans is that of rallying leader. Cassus Fett's system gave him red armor. They are chosen by the clan leaders, according to a logic that is specific to each of them. As Clan Leaders are the Mandalores on a smaller scale, Rally Leaders take over the role of Favorites. They are advisers, but in combat their roles are much broader. In fact, in the field, they are the ones who perform the roles of officers. They are the ones who lead the groups of fighters to a given point. And who judge the situation to relay it to the marshals who remained at the command post. They weigh little on the hierarchy, but remain essential members.

Finally there is the base, the great mass of warriors. Cassus Fett made them wear blue armor for recruits and white / silver for veterans. In his time, the neo-crusaders recruited a lot and blue was therefore the dominant color of the armies of the clans. But nowadays, those who follow this code and paint their armor according to their rank tend not to use white / silver and settle for blue without considering experience. Finally, when the code is truly respected. Rally leaders in blue armor have already been noticed.

Besides all this, there are a few groups that are walking on the fringes of the system. Solitaires or clans too small to really matter and where the leader is considered more of a rallying leader than a marshal. Mandalorians whose rank is lower than it could be if they were part of a powerful clan. Those who elsewhere we would call left behind. But among the subjects of Mandalore, we preach that we are part of a big family. Whether at the clan level or at the level of all people. And barring rivalries between the leaders, the weakest will always be able to count on the brotherhood of their comrades who will help them to maintain their rank. With the victories and their prestige that will rise, it will be easier to recruit and regain legitimate status. Or if that is not possible, to let yourself be absorbed by the ally. The fallen chieftain will then become a simple warrior again. The ranks are thus fluctuating among the Mandalorians.

Add a comment from SWTOR - The Mandalorians, an army or a horde?