Robinson: The Journey - A VR Adventure in the Dinosaur Age 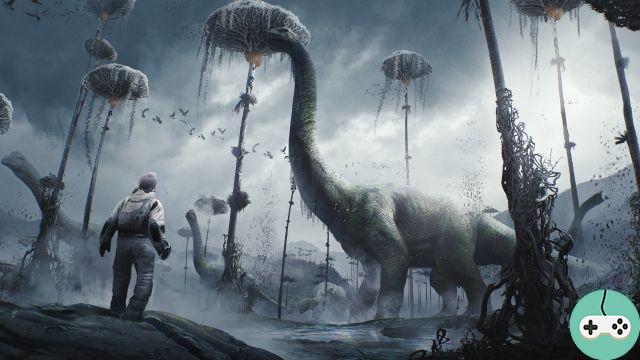 I followed the news of Robinson: The Journey for a while. It must be said that on paper, it's promising: explore a deserted planet like a modern-day Robinson Crusoe, all entirely in virtual reality. Has the contract been fulfilled?

L'history is simple, we play as a young boy named Robin which finds itself alone on the surface of a planet where dinosaurs reign supreme, with fauna and flora drawn from prehistoric times. It ended up there following the Emerald crash, his ship. He was hoping to be rescued soon, but a year has passed and he appears to be the only human alive on Tyson III. With the help of HIGS, a robot with advanced artificial intelligence, he had to adapt to survive and support himself in this dangerous world.

Despite the situation, Robin remains a kid who just wants to have fun. And he is bored because HIGS refuses to put himself in danger. The robot doesn't like Robin's friend either, Laika, a baby dinosaur that the young boy saw being born and saved at the beginning of his forced stay on the planet. So when they stumble upon another HIGS unit stuck in a nest whose records suggest that there are other HIGS, Robin takes the opportunity to break her routine to go look for answers. With more or less the blessing of HIGS. I won't tell you more about the story, it would be a shame to spoil the surprise for you even though a big part of the game is above all about exploration and this poignant one-on-one with the dinosaurs. We discover different environments, the base camp, the farm, the jungle, the marshes, then the planetarium in the rubble of Esmeralda. 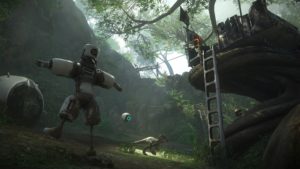 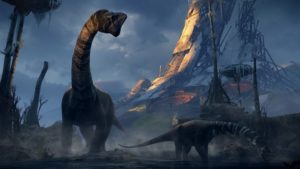 The first moments of the game are there to serve as tutorial and discover the world, this introduction taking place in the base camp. Equipped with my virtual reality headset, I grab my controller (the game is not compatible with the PS4 Move even if the hero carries tools in his hand with a similar, strange shape). The left joystick moves Robin forward and the right one turns the camera (required to turn around for example). With the cross I call Laika: feed, take, follow and roar (clockwise from above). 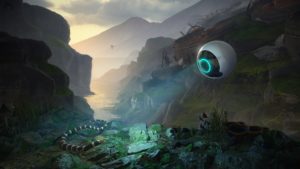 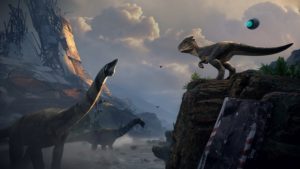 I own a hand tool that allows me to either scan or levitate. Either mode is activated with the trigger R1, then used with R2. The scanner is linked to a collection of objects and animals, the Infotarium. Each scanned element is referenced there and I can come back to it at any time to read an explanatory sheet or listen to the audio tape again. The scan is performed by pointing the scanner at the chips in green, while avoiding the chips in red. Of course, the rarer the object, the more numerous and misplaced the red chips. There are also animals that require speed and dexterity because they are in motion or disappear after a few seconds out of their hole. For levitation, this will be used to solve various concerns even if I am limited in the size of the objects that I can handle. An object that HIGS can sometimes activate allows me to lift larger items. 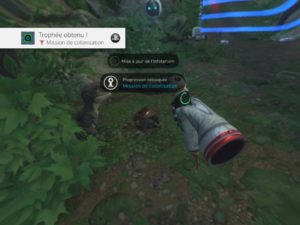 Robin is an excellent climber, which requires to alternate the catches with the triggers L2 and R2 after having targeted them with the head. It is relatively easy to learn here, especially since the sockets are colored orange (in a very unrealistic way). On the other hand, I sometimes wonder if the boy isn't a disjointed monster when I see the reach he has, proving himself able to grab a hold over three feet without worry. Damn agile! Climbing is a necessary step to advance many times, sometimes going as far as having to let go to recover a lower grip or even having to use kinds of mushrooms that have the bad habit of opening at regular intervals. (and therefore to bring down Robin). A fall is most of the time fatal, fortunately there are regular checkpoints that do not make the fall punitive.

On several occasions, I have encountered camera worries, and in particular my head which passes in the decoration. Suddenly, I end up with a big black screen and you have to manage to get out of it having no idea where the annoying element is. Well, most of the time, I manage to get out of it by moving in all directions, or by resetting the camera (long press for 3 seconds on the Option key). Where it turns out to be more awkward is during the first mini-game where I have to restore the power, I was systematically in the background after speaking with HIGS. As this takes place on a fixed screen with a top view of the camp, no possibility here to move to get out of it. Except persevere until it passes and then avoid moving too much. On the other hand, I had no problem with the following ones after having repositioned my camera differently ... so to see if it did not come from my initial configuration. 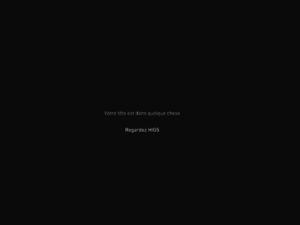 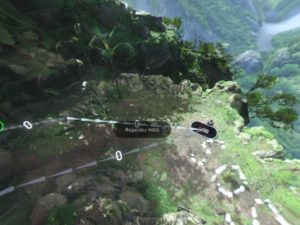 This is really the big black point of this game: the camera management. And the list of worries does not stop there, the climbing mode tends not to activate, you have to move forward, backward, move, stick to the wall and then bang, all of a sudden, your hands are there. The same goes for the zip line that the kid never wants to grab naturally when he gets within range. It is sometimes laborious to pick up objects even if there is a laser pointer mode on the joystick (L2) to choose the object to activate. 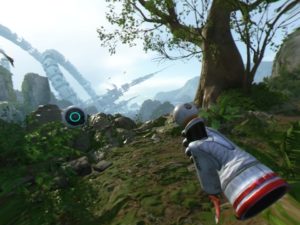 All this taints theexploration experience in this world which is moreover very beautiful despite the concern for sharpness inherent in virtual reality (and the PS4 platform). The graphics are impressive, made with CryEngine, it is very pleasant to be able to observe the world at 360 °. Pterosaurs fly high in the blue sky, lush trees offer us their shade and Robin evolves through a complex interweaving of caves, cliffs and pieces of wreckage of the Esmeralda. The music adds to the immersion with different little noises of nature. All this is very convincing even if the world is much less open than I expected, the explorable areas being limited by elements of the scenery that prevent you from climbing this rock so intriguing or continuing by this path. It always annoys me a little, especially when it would be enough to climb sometimes to descend. But no, you have to go all the way around because it is not planned ... 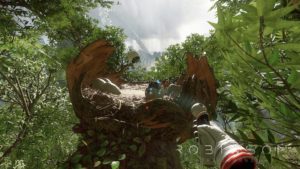 On the side of lifetime, count about five hours in a straight line to find out what happened to the inhabitants of Esmeralda, or roughly five games sessions to avoid the headache / motion sickness that appears after an hour of play (la seen in FPS is not the most pleasant on the stomach). The story turns out to be quite linear and moves slowly even if the end alone is enough to reward perseverance. There may be a little more to do while walking around if you want to scan everything for the Infotarium or if you are struggling to figure out what to do (the indications given by HIGS are not always clear). 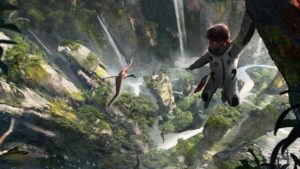 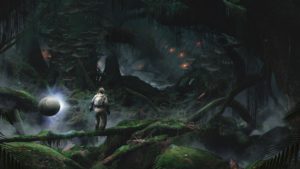 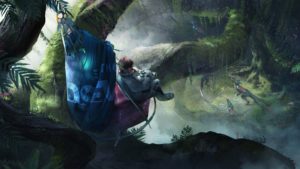 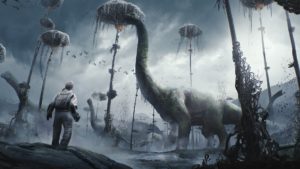 To conclude, Robinson: The Journey promised a magical adventure, but unfortunately the still too early technology of VR created an experience a little less captivating than I expected. Camera bugs are annoying and the world manages to limit exploration, in a linear progression. Despite impeccable graphics and music, I am not totally convinced by the gameplay, Robinson: The Journey revealing a series of beautiful landscapes, climbing sessions and too simple puzzles. If it weren't for the awesome dinosaurs to make up for it, those gigantic placid long-necks, cute and intelligent Laika, or even the ugly raptors, Robinson clearly wouldn't be worth it, especially when you put it back in the shot. very material of the price / lifespan ratio (count around 50 €). However, there would not be missing much to make Robinson: The Journey a very good game, more freedom, more possibilities in this open world, less camera worries ... Now it's up to you to see if you will be able to override it. flaws to discover what is certainly one of the most beautiful virtual reality games of the moment.


Do you want to be up to date and know all the tricks for your video games? In gamesmanagers.com we enjoy playing as much as you do and for that reason we offer you the best tricks, secrets or tips for you to play non-stop. We offer you quality content and always updated to keep you up to date. That's why, in our website, you will find not only videogame guides but also tricks, secrets and thousands of tips so you can play to the limit. Are you ready to get it? Enter now and enjoy your videogame!
SWTOR - Mako ❯

Add a comment from Robinson: The Journey - A VR Adventure in the Dinosaur Age