Last December I was able to attend the presentation of the latest investigation game from Microids and Studio Artefacts "The A.B.C. Murders"adapted from the famous novel by Agatha Christie. Microids is one of the oldest spanish game publishers, that I knew when I discovered video games at the end of the 80's-beginning of the 90's on the Amiga 500. I admit l '' have since forgotten a little but I pleasantly rediscovered it at Paris Games Week with a point-and-click that I look forward to (Yesterday Origins) but also especially with Le Donjon de Naheulbeuk of which I have been a big fan since the beginning.

Regarding The ABC Murders, and as a fan of Agatha Christie, I have obviously already read the novel and I saw by chance this summer the series started in 1989 which was broadcast on television in the afternoon (thank you the paternity leave and my daughter's naps). So I already knew the murderer, as well as the general progress of the investigation, the places but especially the sets which are effectively taken from the TV series.

Would this rereading of the novel adapted into a video game bother me, me the absolute fan since childhood of the work of Agatha Christie? To answer this question, I accompanied my player opinion with a fan opinion of Hercule Poirot but it's time to see what it is about without of course revealing too much of the scenario.

Here is the Microids pitch which is the same as that of the book and the series. I will transcribe it to you as it is:


A mysterious letter from a man named "ABC" is addressed to Hercule Poirot, announcing an upcoming murder. The killer does not hesitate to despise the police force and to question the intelligence of the famous detective! The adventure will take the player who embodies him across England on a time trial investigation where it will be necessary to show observation, quick-wittedness and poise.

The first day of investigation begins with the analysis of the murder of a saleswoman located precisely in the town indicated by the assassin and at the time indicated in the letter sent to Poirot. The assassin was not bluffing and taunts the detective. Unfortunately, this is only the first in a series. And this one is the easiest to disentangle. By analyzing the scene of the crime, questioning the neighbor and opening various increasingly complex objects (cash register, box, bedside table), the staging of the game takes you to the solution of the enigma without however, provide you with neither the culprit nor his motive, which will remain unknown for a long time to come. To help you, two colorful characters from the universe of Hercule Poirot, his friend Captain Hastings and Chief Inspector Japp, will also be present.

A wide variety of gameplay

The ABC Murders will satisfy any audience, whether expert or novice, thanks to a wide variety of gameplay. It is presented as a "point-and-click" while regularly offering various puzzles. For example, you will be faced with scene study sequences where you will have to find items to unlock. Multiple choice dialogue scenes will also advance your investigation. Thanks to all these clues, Hercule Poirot will put his brain to work and deduce an element of the investigation, thus making it possible to move on to the next investigation.


Finally, at the end of the investigation, you will have to validate the crime scenario (or not) to move on. It seems complicated in writing, but rest assured: with the mouse in hand, it all happens very naturally! 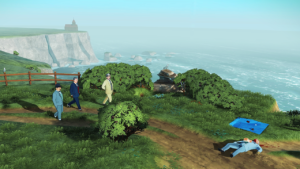 In addition, in the event of a blockage, you can call up the game's help. This context-sensitive help highlights an element to click which facilitates the analysis of the current riddle. Not having needed too much for this first part which serves as a tutorial (I only tested it on a cash register to unlock), I only know that it exists. But be aware that the more you use this aid, the less points you will have at the end of the adventure.

Interesting challenges (to obtain all the achievements) and replayability

Several rewards are available for the player, as well as numerous achievements. You will have to play the game at least twice to get them all! It is thus possible to solve the enigmas, to question the witnesses and to interact with the decoration in a way very close to Hercule Poirot (i.e. with an important ego) or on the contrary to do it to your way. You get ego points depending on the method used, and each method yields different successes. Finally, of course, to get a perfect score, you will have to finish the game without contextual help and also without making mistakes in solving the puzzles (easier said than done). 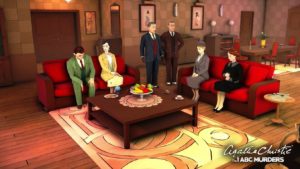 Know that there is also an alternative ending to that of the books and the series ... 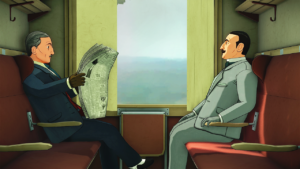 As you can imagine, I loved testing this game and can't wait to complete the final version which should be released on February 4 2016 on PC, Mac Xbox One and PS4 in spanish and in many other languages. You will be able to choose how you want the characters to speak: you will be able to play the game in original version (in English) with some spanish expressions specific to the character of Hercule Poirot who is Belgian.

Although you already know this first part of the adventure, the puzzles and the contextualization of the puzzles are perfectly suited to video game support. So, seeing the series only helped me with the final resolution by validating how the first victim was killed. So, even if the game can put off by its drawn appearance, I strongly recommend The ABC Murders to all fans of point-and-click adventure games or puzzles who like to rack their brains (without forgetting of course fans of Hercule Poirot!). 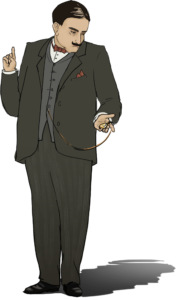