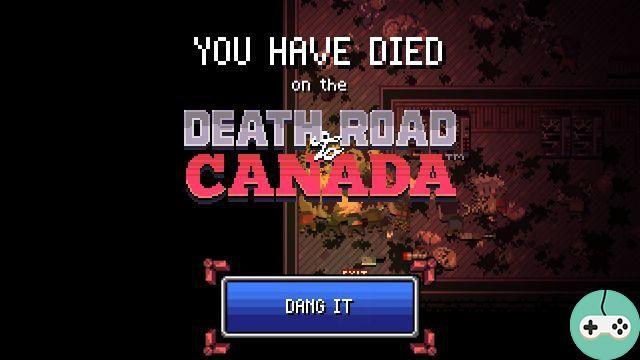 Death Road To Canada is an action-rpg developed and published by Rocketcat Games, released July 22, 2016 on PC and May 8, 2018 on PlayStation 4, Nintendo Switch and Xbox One.

You are a person living in Canada. The country has just been invaded by hordes of zombies, and you decide to take the road by car to try to reach a supposedly safe area in order to escape certain death.

Okay, the story is not transcendent, but the latter is clearly not useful given the type of game, except to give a reason to run over the zombie! So don't expect a storyline full of twists and turns, with secrets to uncover, mysteries, etc. I repeat: this is not what we ask of the game.

Before getting to the heart of the matter, it's important to know that absolutely EVERYTHING is randomly generated. Whether it is characters, zones, events, etc. And most importantly, all of this is generated in an extremely well done and believable way. For example, you will not have 3 times in a row a vent offering you the possibility of changing cars.

You therefore start the adventure with 2 characters: your main character and his “foil”. Both are generated randomly. You can randomly generate as many as you want, until you find one that interests you. The characters have two characteristics that will influence the whole game: trait and perk. The trait corresponds to character and personality. There are many, such as paranoia, fear, recklessness, etc. The perk corresponds to a skill or characteristic that the character can have, such as being a "big beefy", being fast, knowing how to aim well ... A big burly will give much stronger physical blows, while a nobody knowing well aimed will be able to kill for sure a zombie with a gun or throwing and so on.

If, during a previous game, you liked a character, you can save it and recover it for each new game. Once the two characters are created, start the game and have fun! 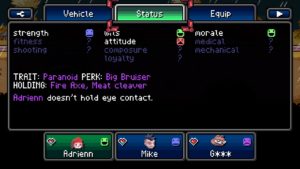 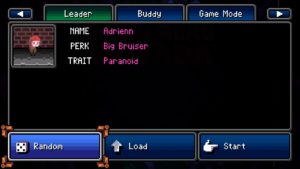 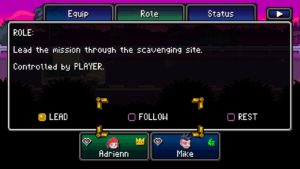 Once in the game, you will be able to manage your characters. As a beginner, you will only have 2, but as your adventure progresses, it will be possible to have new companions with you. The management side, although quite important, is very quick and easy to learn. You have to manage the equipment (weapons, ammunition, grenades, various items of care, etc.), the role of the character; the leader (the one you control), those who will follow you on a mission, and those who will stay behind.

One of the strengths of the game is moral choices. Throughout the adventure, you will have to make decisions that will influence your trip, but also the morale and attitude of your companions. For example, if you cross a building with a big "Help" hanging from a window, you can choose to stop to go and help the survivor or to continue your journey. Some of your companions will be happy, or not happy, depending on your choice. It changes from character to character. It may be that in your team, both points of view are "present" and therefore, some will approve of your choice and others not. If the approval of one of your companions drops too much, he may decide to leave your group, taking everything he has with him. 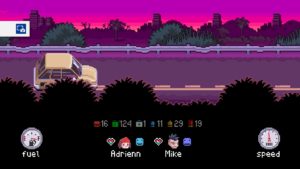 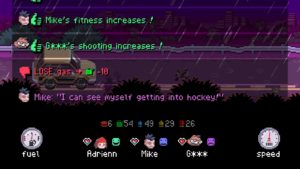 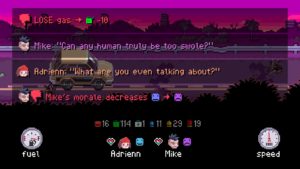 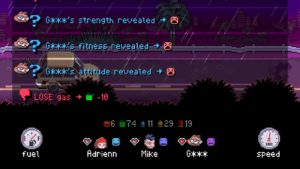 Other choices may be more difficult, for example, two characters may not get along and you will have to choose which one you want to keep. And there, it is even more difficult, because each character has a "specialty". You can, for example, have a character who specializes in repairing your vehicle and another who is a doctor. If you dismiss the doctor, it will be very difficult for you to be healed (Thanks Caption Obvious!) And other companions may be angry with you. If you separate from your mechanic, your car will no longer be able to be repaired and you may end up on foot and therefore your chances of surviving will drop drastically, in addition to the risk of seeing companions leaving you to try their luck. side. 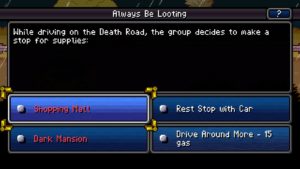 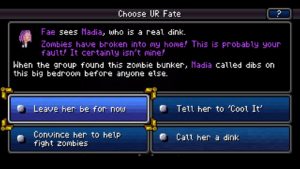 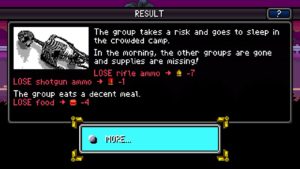 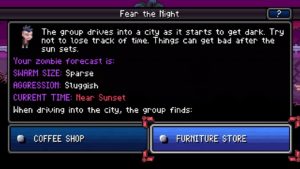 Now let's get to the heart of the game: your escape! As in any game of this genre, you will have to survive. And for that, it will therefore be necessary to collect a large number of objects and equipment throughout your journey. The two most important resources are gasoline and food. Without gasoline, your car will break down (logical!) And you will find yourself on foot. This will greatly lengthen your trip, in addition to being much more vulnerable to zombie attacks, fatigue, hunger, etc. (not to mention the lower morale of your companions). The food itself, no need to explain, I think! ? Note that food can also be used as a bargaining chip when you come across NPC camps.

Of course, those aren't the only two things to pick up. The healing items will be very important, as well as the different ammunition (pistol, assault rifle, shotgun, etc.), but also what can be used as a melee weapon, because they break in the after a while. All of this is, of course, quite rare. You will therefore have to weigh the pros and cons at each possible stop. Risk going to explore a place to recover resources, even if it means having to spend others to reach the place and kill the zombies, or continue your journey hoping to go further and / or fall on a place less populated by the enemy , but who can offer less resources! 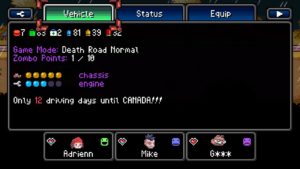 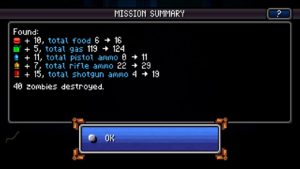 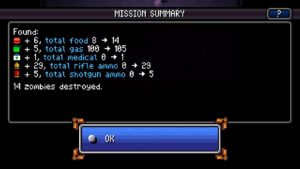 And that's where we get to the heart of the matter: zombies and fighting. I'll be clear from the start: the zombies are very numerous and the fights more complex than it seems. Indeed, the game quite naturally introduced the notion of noise to attract zombies. The use of firearms is therefore at your own risk. But besides that, melee weapons break quickly, plus you see your characters getting tired and out of breath using them too much, making your shots as weak as a clam under muscle relaxer. In addition, zombies can follow you from everywhere, don't expect to be able to enter a building or a room and hope that the zombies "forget" you and leave. On the contrary, they will follow you and may even block the door outright if there are too many of them. 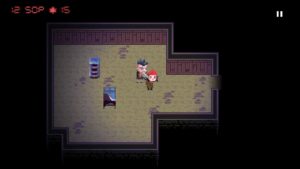 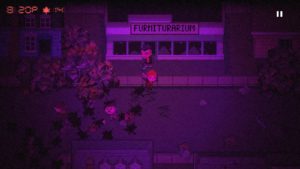 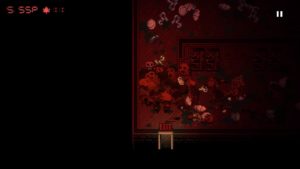 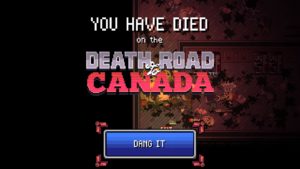 If the character you control dies, you will automatically take control of one of your companions (if you have them and they are not dead too!). Obviously, everything that the dead character had on him must have gone to recover "the old fashioned way". The magic inventory that transfers items from a dead character to a living character does not exist here. When your character dies, all of his objects are scattered on the ground and you will have to brave the zombies that devoured him if you want to recover them, or else flee like a coward!

The game is therefore quite difficult. During my first part, from my first “recovery” stop, I advanced in relaxed mode until I opened a door and came across a dozen zombies who threw themselves on me. Bad luck, I had no idea that the sound of guns attracted zombies, so I shot and saw all the zombies disembark from outside the building, blocking me the only exit. My 2 companions were quickly devoured, and I ended up being devoured in my turn, right in the middle of the supermarket. The difficulty comes not only from the very large number of zombies in the places, but also from the low number of ammunition, weapons which deteriorate quickly and the fatigue of your characters. The “calm” approach is therefore strongly recommended! However, there may be times when you don't have a choice, especially when you stumble upon a horde. In this kind of case, you will have to survive more or less long before having the possibility of escaping. It is all the more difficult as sometimes, the hordes can attack at night, and there, you will hardly see anything! 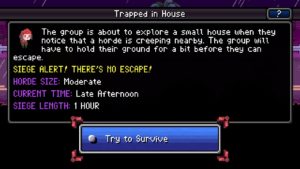 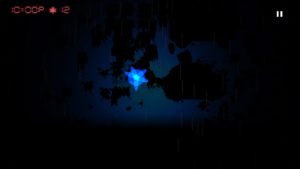 The game itself is also randomly generated, as I said before, so you will never have the same game twice, the same areas, or the same events (not in the same order though). you come across similar events). This allows you to constantly renew the experience without ever having the feeling of déjà vu. And, the pompom, if you have friends who like this kind of game, you can get devoured with friends by playing in multiplayer! ? Moreover, Death Road to Canada is a game that launches quickly, is played very quickly and easily. You won't have to spend 10-20 minutes setting up your character, game, etc. If it's a new game, you start it, generate 2 characters and presto, you are immediately in the bath and that, whether you play alone or in multi.

Death Road to Canada is an excellent "little" game, offering moreover an almost unlimited lifespan. In multiplayer mode, it's fun from start to finish. The only small complaint I would make is precisely about the multiplayer mode, available only locally. It's a shame that if you or your friends can't get around and you still want to play, this isn't possible via a possible online multiplayer mode.