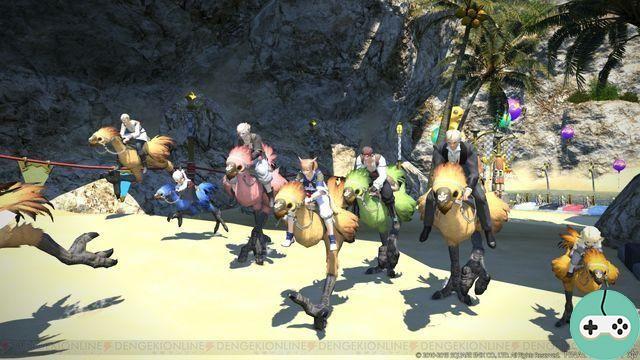 The Gold Saucer has been online for a while now and we haven't actually talked about chocobo races yet! We will fix it ... 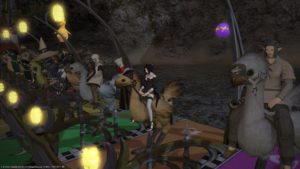 I suggest you visualize in pictures how the chocobo races work, in particular how to access them and how a race takes place.

To start from the beginning, you will need to unlock this feature. To do this, you need to pick up the quest located in Chocobo Square, at the Gold Saucer. To enter this square, you must speak to the Liftière located here: 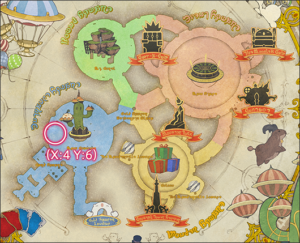 Once in the square, you can harmonize with the etherite so that you no longer have to go through the Liftière to get there.

So here you have a quest to accomplish, it will bring you to Brancharquée Ranch, in the Central Forest. Here, you will be able to choose a new male or female chocobo, it's your choice. Be aware that these chocobos can reproduce with others and that mating is only done with a chocobo of the opposite sex.

Once you've chosen your chocobo, you'll need to return to Chocobo Square to choose a name for your new running friend! Unlike your companion chocobo, you will not have the same freedom to compose your name: you will have to choose 1 or 2 items from a list of proposals. 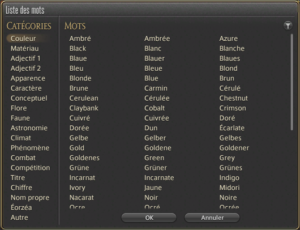 As you can see above, despite the limitation to what they offer, there is still a lot of choice! I will tell you at the end of the article how I named my chocobo ... (no cheating !!)

That's it ! You now have your first racing chocobo! Before starting the serious races, you will have to do a training race to learn the mechanics which are not very complicated.

During a race there are different things to know. The first is how to move: the chocobo moves on its own at a standard speed but you can move it to the left with Q and to the right with D. 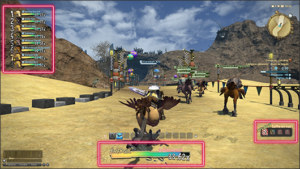 You can also speed up. To do this, just press the Z key. But it's not that simple! An energy bar is present at the bottom of your screen and empties according to several criteria: slowly at standard speed, a little more when accelerating, and much more if your chocobo "gets carried away".

A chocobo can get carried away for 2 reasons:

To remove this effect, just stop accelerating, or slow down with the S key to remove it more quickly. If your energy bar drops to 0, you will no longer be able to speed up or slow down.

Another notable element on a circuit: the magic boxes!

Boxes are areas that will apply a certain effect to you depending on the type of box. Compared to the image above, the effects are respectively:

You will understand, the first 2 boxes are to be borrowed, the other 2 are to be avoided.

Last item to be found on the circuits: the chests! 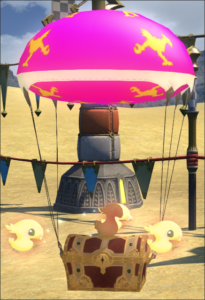 Chests function similarly to surprise boxes in Mario Kart. By rushing on it, you will get an item that can have 2 possible uses: a positive effect on you or a negative effect on one or more opponents. Players can see the object they will fall on if they take the chest via an icon displayed on the screen (see first image of the mechanics, bottom right).

Among these objects, you will find:

The races can suffer bad weather. These will affect the chocobos which will each react differently: some will be slowed down, others will go faster. It can also affect energy.

Once all participants have crossed the finish line, the race is over. You will be able to see the ranking and an experience bonus will be randomly awarded to one of the competitors. 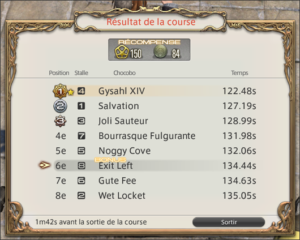 Progression of the chocobo

Your chocobo has a progress bar and a level system called ranks. To gain experience and thus advance the rank of your chocobo, you must complete races which will grant you a certain number of experience according to your final ranking in the race.

A chocobo has characteristics that you can increase with the help of different forages that will each improve their own attribute. You can buy them for Gold Saucer Points (PGS) from any of the NPCs in Chocobo Square or Brancharque Ranch (6,4), or you can craft them with crafting.

The different characteristics of your chocobo are:

When your chocobo has reached maximum rank, 40, you can retire it. If you do, he will never be fit to compete again. 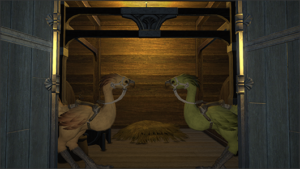 When you have reached rank 40, you will have a new quest available, How do we make baby chocobos?, In Chocobo Square, which will allow you to guide you through the different steps to be able to breed your chocobo.

To receive an offspring, you need 2 chocobos capable of procreating. You have 2 solutions: 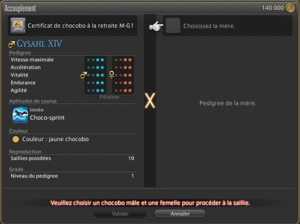 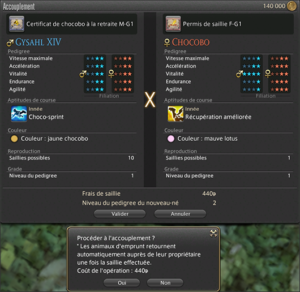 You can therefore submit the mating request to Katering at Brancharquée Ranch in the Central Forest (20,22) who will take care of everything else with a few PGS supplement. 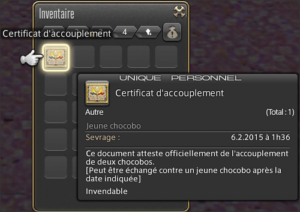 So you now have a mating certificate and you just have to wait a bit for the baby to come into the world. The moment when this will be done will be communicated to you directly after having validated the coupling at Katering. Once the date has passed, you can get your chocobo back in exchange for the certificate.

Maybe you want to know what the point of making babies with such innocent creatures as chocobos? Fine, if you insist.

In short, it is mainly used in the transmission of skills and a stronger power of your chocobo. Indeed, your chocobo will constantly have better characteristics than its parents when they were at its stage.

As noted above, skills are also affected. Your chocobo can have several which can be of 2 types: acquired or innate. The innate skills are those inherited by one of the parents, the acquired ones are those that we ourselves will teach our chocobo with manuals that we can buy from the NPC seller at the Square des chocobos.

Here we can see the innate skill that our baby chocobo will inherit.

4 different actions around skills are available:

You will therefore have to spend a lot of time raising several chocobos up to rank 40, i.e. you will need from 1 to 6 races to move up a rank (in proportion to your rank and your overall position at the end). run) and a run does not last very long, 2 to 3 minutes.

And There you go ! You know everything there is to know about chocobo racing! Ah, and by the way, my chocobo is called:

Name of my chocobo

Momo the brotherhood (in spanish: Momo the Brotherhood)

Hope this guide has been helpful to you!