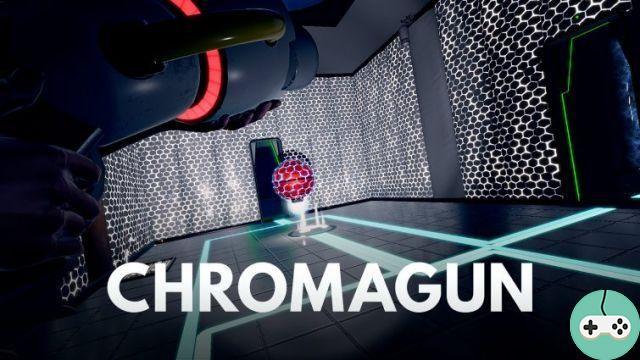 Last year, at Paris Games Week, I went to meet freelancers and, among them, I discovered the ChromaGun project. At the time on Steam only, I liked this puzzle game, featuring an innovative color-based game mode. On the occasion of the release on consoles, I was able to dive back into this game which is reminiscent of Portal ... without portals!

When I start the game for the first time, a tutorial gently explains the basics to me, with only one color, yellow. A white ball is in the room and I have to color it yellow with my gun so that it moves automatically and sticks near the wall of the same color. As it would be too simple otherwise, only some walls in rooms can be colored, but not all, interactive walls clearly have a different texture that identifies them. 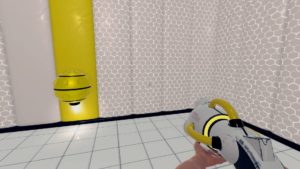 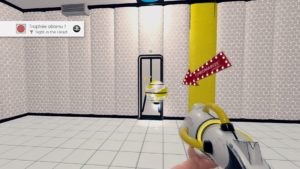 These balls will sometimes block my way and, other times, will have to be moved in order to be used to open doors. Lasers on the ground tell me which switch corresponds to which door, laser that lights up when the switch is active. 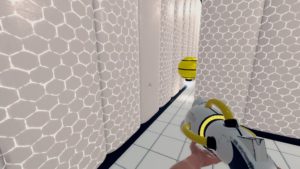 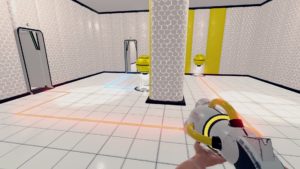 But everything is not so easy at ChromaTech because other colors are quickly added, blue and red. 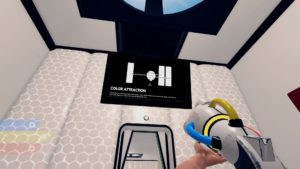 And with these three colors all the mixtures, yellow + blue = green, yellow + red = orange ... As well as black, the color without any attractive power created by the combination of the 3 colors. 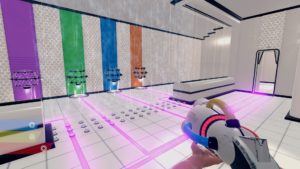 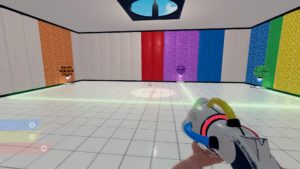 The balls are not only harmless and others will be less easily let go, sporting spines all around and injuring me if they touch me. Suddenly, a rare thing for a puzzle, death is never far away! One way like any other to restart the whole level (even if going through the menu to restart the level seems much less violent and faster). 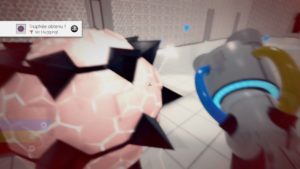 And you have to go through this regularly because the gun provided by ChromaGun has no functionality to erase nonsense, any error is fatal. I bugged and colored a ball in orange below, whereas I had to make purple. Even if I am very happy to have unlocked this trophy which is reminiscent of my stupidity, I have no escape and I will therefore have to restart the level so that the ball goes to the right place. 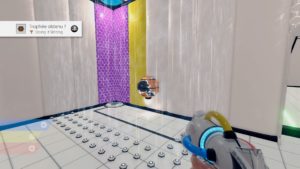 And I admit that this is clearly the least fun part of the game, this punitive side at the slightest mistake. The resolution of a puzzle is based on a chain of actions, requiring to color the walls, to match the balls, to activate switches, to make pass doors to balls ... And, suddenly, even if everything has gone well so far, an absence on a mixture of colors, and everything has to be redone. The only negative point, we must admit, of this addictive game to be put on the consoles of all puzzle lovers.

Note that this is not a simple port. Indeed, on the blog article published by the developers on the occasion of this release more specifically on PlayStation 4 (the version I tested), the developers talk about the long work required for this version. They completely reworked the graphics and lights, but also all the models and textures. The sound effects have also been recreated, along with various other "under the hood" details. There are also some specificities to the PlayStation 4 itself. Thus, the controller gives the necessary instructions directly through the built-in speakers, improving immersion, and the colored strip of the DualShock 4 controller lights up according to the ammunition loaded. The interface extends beyond the screen!

A good little puzzle game, ChromaGun is innovative and well designed, offering hours of play to get out of the ever more convoluted colorful mazes that ChromaTech has to offer. You will need a good dose of thought, added to some patience to get you out of this new challenge, landing today on your PlayStation 4 or Xbox One console.

Trove - The console version is waiting for you! ❯

Add a comment from ChromaGun - The puzzle arrives on consoles