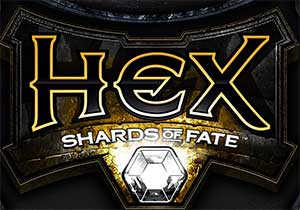 The teams of the German company Gameforge were, last week, at the e-sport bar Meltdown for an afternoon to show us their latest news. On the program, three games that we were able to test were presented to us. After Orcs Must Die Unchained, here comes HEX Shards of Fate!

HEX SoF is described as the first of the MMO-JCC, JCC stands for Collectible Card Game. It was designed by Cory Jones and his company Cryptozoic, to whom we owe many card games and board games, including the World of Warcraft card game. A company that therefore has nothing of a video game developer at the base! And yet they were like, "It would be great to make a game that combines aspects of the TCG and an MMORPG, including gear, guilds, and lots of social stuff." In addition ... it would make it possible to play with lots of different people all over the world, and not just the 2/3 other players from his town who can be found on Saturdays at the dedicated shop on the corner!

In fact, nearly 18 people agreed with them and allowed them to embark on the adventure thanks to a Kickstarter which endowed the company with some $ 000 million to be able to start the adventure, by making this project one of the most funded by the crowdfunding platform (2,25th position currently).

I will not come back to the presentation of the game itself, we had already devoted an article to it. I will rather focus on the developments / events noted by the spanish Community Manager. And to keep the suspense a little bit more suspenseful, I'll come after the presentation of PvE content? 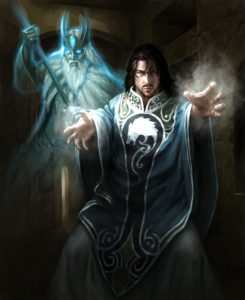 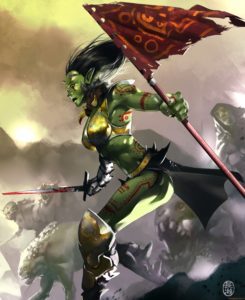 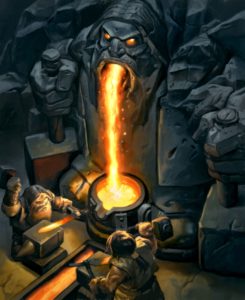 Some of the nice graphics of this game

First of all, you should know that the game contains tools to organize tournaments directly, up to 128 participants. Everything is handled automatically by the game. Currently, there are large tournaments organized by fan sites dedicated to this game, such as five shards. For the rest, the current official tournaments are with paid access, in particular a next world tournament whose prize of the winner of the final (which will take place in California, where some of the development teams are located) will be the tidy sum of 100 dollars!

However, it is then planned to organize tournaments with free access. The rewards of these tournaments will be varied, ranging from the rare card to the special design, to a place offered in a paid tournament, including free boosters. Most of the time, these tournaments take place according to the Swiss system or in "best-of-three" (best over 3 games). 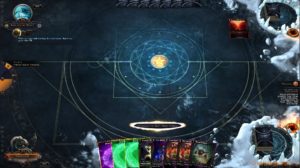 The main HEX game board

The community is quite active. According to the spanish CM of the game, there are around 200 players since the release of theIce Arena, the kick-off of the PvE campaign, i.e. around 4 times more players than before. We can in particular see a lot of theorycrafting on the optimization of the docks, in particular on the optimal number to place in a deck of "shards", the resource cards necessary to place your fighters. The game now also contains graphical analysis tools in the deck builder, such as the ability to draw one card or another. Small additional note, some cards are only usable in the PvE mode of the game and not the PvP one, there are now 2 deck slots, to build a PvE and another PvP.

A real market has been created in the sale of cards for real money. The publisher tolerates selling cards for real money, hoping that this can be done as on the occasion of a paper TCG. They observed, for example, that the "Key to Chaos" card, which does not require any particular shard to be activated, has thus seen its value drop from around two euros to more than 10 euros, or even 20. If the card is sold. tolerated, on the other hand, and this was well specified, the sale of his account is it prohibited!

Currently there are around 700 cards, but soon the third set of cards will be released, bringing the total to over 1000 cards! These can be purchased at the store for IRL money or won in game (in the form of a booster or deck), or exchangeable on the card market present in the game. The other way to earn it is also by example of doing the Ice Arena! 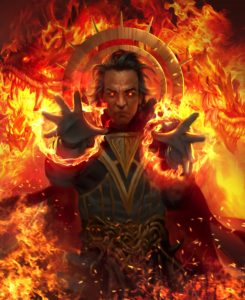 A little warmth before going to the Ice Arena?

The Ice Arena is the name of the game's first PvE "dungeon", and the starting point for the PvE campaign that will be developed as the game progresses.

The Frozen Arena is also a first opportunity to give a leading role to the legend that surrounds the world of HEX: Shard of fate. Hostilities are unfolding in the far north of the Hyperborean Mountains, an inhospitable and depopulated region of the world of Entrath. After the impact of the HEX meteorite, which shook the Entrath civilization to its very foundations, this once flourishing place gradually fell into disuse. It wasn't until a millennium later that a renegade named Hogarth managed to unearth this long-forgotten arena. This obscure scholar immediately fell in love with this place of mysteries as numerous as they are unfathomable and, even today, he haunts this sterile place patiently waiting for someone to have the courage to take up the challenges of the Frozen Arena. .

Hogarth, it's that charming character 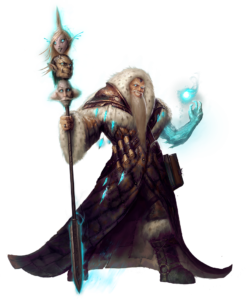 Currently the ice arena is faced in chain by the players because, whatever your progress, it allows you to gain gold, more cards, and sometimes improvements. Of course, despite everything, progressing further in the arena means getting more rewards at the end!

There is no way you can beat the arena on your first attempt, unless you are more than an exceptional player. In reality, the arena consists of about twenty fights to be fought: 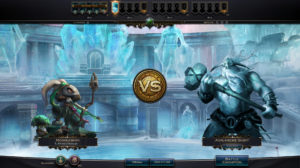 The screen showing you the proposed meeting. You can see the progress bar in the arena at the top.

Once you have completed a few arenas, you will have collected some of the 200 arena items, cards or equipment. This equipment is like MMORPGs, items for the champion in your deck, in order to give him bonuses! This will allow you to improve your deck. In addition, each card can also receive improvements (which will only have an effect in PvE), and the modifications of the cards can give very powerful new ones, it will be necessary to test various combinations to create these specific cards! 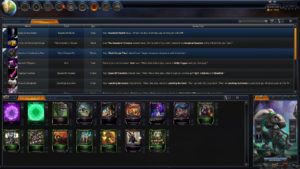 The Arena is therefore the starting point of a PvE campaign that promises many more things, such as parts of stories, progressions to be made in guilds (although it is not yet entirely clear how fights will be possible). be led with your guilds) and a whole lot of possible things! 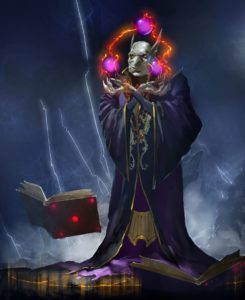 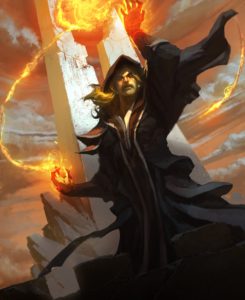 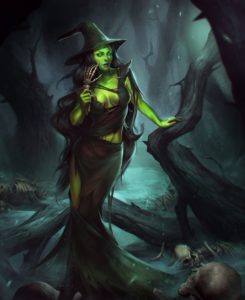 HEX Shards of Fate has been able to go from Kickstarter to beta and a beta that continues to promise with each addition of content, especially the ice arena. We still do not have an announced date for a final release for this game rated 12 years and over, and which will be released in a number of languages:

In addition, the game will be released on PC or Mac and is even planned for iOS later as well as perhaps Android, for those who would like to play on a tablet.

In the meantime, it will take patience to complete the arena, and for good reason: Cryptozoic doesn't want to make this game a casual game, at least PvE mode. It is clearly intended for Hardcore Gamers.

If you are one of these players, the game tempts you and you have at least this configuration (PC) ...

So don't hesitate any longer! Go to the game's website to download the game and start some games! Don't deprive yourself, it's free-to-play! I'll leave you with this trailer for the PvE campaign.

add a comment of Gameforge Meltdown : HEX Shards of Fate