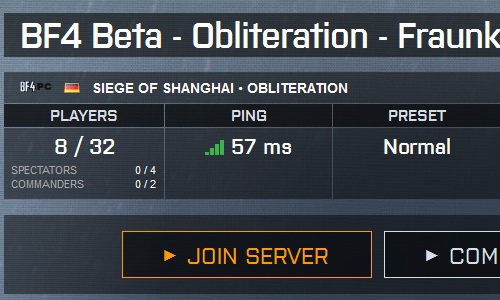 Obliteration mode is now available in the Battlefield 4 beta! It is therefore a third new game mode which is now playable in addition to the conquest and domination modes. As a reminder, here is the official description of what Obliteration mode is:

Type: a real race in vehicles and on foot to deliver explosives

It's our “Battlefield Moment Generator” mode, as we like to call it. It's also one of Battlefield 4's two new modes - and certainly the most explosive! A bomb spawns randomly on the battlefield, and both teams must fight to retrieve it before returning it to one of the opposing team's three objectives to destroy it. Once the bomb has detonated, a new bomb will appear on the battlefield and the race will begin again. The game ends when all three of a team's objectives are destroyed. Games can be very quick or extremely contested, depending on your team's ability to stay together and deliver the bomb. As with most other modes, there is a time limit to prevent the game from going too long.

Compared to Conquest mode, the action of Obliterate mode centers on where the bomb is located, and since there is only one bomb at a time, you can switch from attacker to that of defender in a fraction of a second. You must anticipate enemy movements to defend in the right place at the right time and resume the offensive - or intercept the enemy to recover the bomb. This incessant back and forth between attack and defense draws its inspiration in part from American football, the explosion of an enemy installation which can be compared to the success of a touchdown.

And a video showing a Destruction mode game on the Paracel Storm map:

All that's left to do is try this!