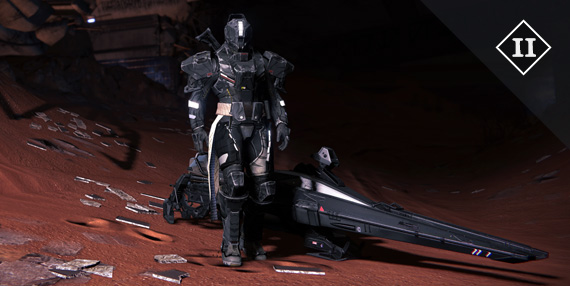 A quick overview of this Bungie Weekly Update on June 25, with some information on Destiny's next expansion: "The Taken King", as well as upcoming changes to the game's site and app. 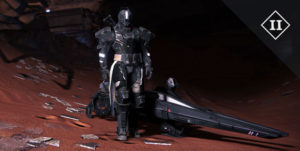 This week at Bungie, the teams worked hard to fix what was wrong with the Collector's Edition award for The Taken King. You have voiced your objections, and they fully agree with you. Now their attention is focused on creating solutions. It takes time, so forgive their silence for the past few days. In such moments, action is more demonstrative than speaking.

In the development of this new DLC, one of their goals was to celebrate you and your triumphs. They revealed Destiny's future adventures at E3, however the talks didn't do justice to their plans to honor your legend.

Here are a few words from Luke Smith :

I Luke Smith, Creative Director on Destiny: The Taken King.

Several years in the past, I wrote to you every week at this location. We were talking about Combat Weapons, we were talking about things we weren't going to talk about, and at one point I drew a horrible drawing of a map that was supposed to arrive later and made you wait with it. in the Weekly Update.

However, most of you don't know me.

Reading my interview with Eurogamer and imagining it to come from a developer of a game I love, you could say that developer is behaving like an idiot.

But the idiot here was me and what I might have said pissed you off, and rightly so. I am sorry.

What I said might have made Bungie seem like it wasn't paying attention to its most loyal fans. We really care about you. We are listening to you. And we're going to do it more now.

So here's what we're up to for the Taken King Collector's Edition.

They have been actively working lately to make the digital content of the Collector's Edition available in an Upgrade Pack which will cost around 20 € and which will be available on 9 September next. If you purchase a digital version of Taken King or already have one, you will be able to purchase that digital content as soon as it becomes available.

If you have decided to purchase the Legendary Edition of Destiny: The Taken King, you can also order this pack to upgrade to a Collector's Edition. If you buy the Digital Collector's Edition, and already own Destiny and the first two expansions, you'll have some information soon.

If you want to be aware of all the options available to purchase Destiny: The Taken King, you just have to click here (note that the Digital Content is not available for sale at the moment as they are still working on it. .)

For those who want a little more information about emotes and class items in Taken King, they'll be introducing some new class items that will have stats of their own. This will therefore add a new equipment slot that will allow Guardians to build their character not only based on appearance but also based on the stats of each item. The class items included in the Collector's Edition will be a good way to upgrade your Guardian if you arrive in the game or to upgrade the new Doctrines, but they won't be the only new class items that will be available in the game. 'extension.

Here are also other questions asked on the forum.

"Hello, I already own Destiny and all of its expansions. Do I have to repurchase the content I have already purchased to play The Taken King expansion?"

The Digital Edition is intended for players who already own Destiny and the first two expansions, and are ready to experience the new Taken King storyline in September.

"Hi, I have been here from day one. What can I receive?"

If you have a Guardian who has reached light level 30, or if you have purchased and played each of Destiny's first two expansions, you will be considered a VIP in the Tower Registry. You will therefore be rewarded accordingly with an exclusive item pack which will be permanently available.

When you are passing through the Tower, everyone will ask you where you got these great items. You'll nod your head and let them know you've won them over. It's something for the first year, and they won't understand. And they will never be able to get their hands on it with their characters.

And we have more for you in a little while, just for you. Thank you for caring enough to bitch. We have had your feedback, which has been quite loud and clear. We will tell you more soon.

The Bungie Community Operational Platform is a constant target of affection. There are developers at Bungie who are focusing all of their efforts on the Destiny Companion app - a place born from the Internet and / or smartphones. 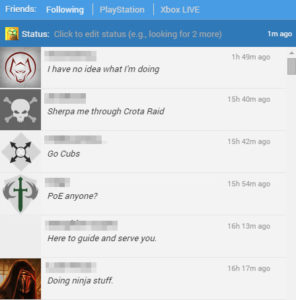 Go even further in personalizing your identity. Set a profile "status" for your friends and followers to see. Easily view the status of your friends and the people you follow with the Friends tab. Use the new Advisor option to see weekly missions, if they are completed, if they change and what modifiers they have! Improved Friends List - It will be easier to re-authenticate on PSN and Xbox Live to see friends on these different platforms. The list of your clan members will also be available in the Friends tab.

(this is also coming soon on IOS)

So, happy with all these announcements?