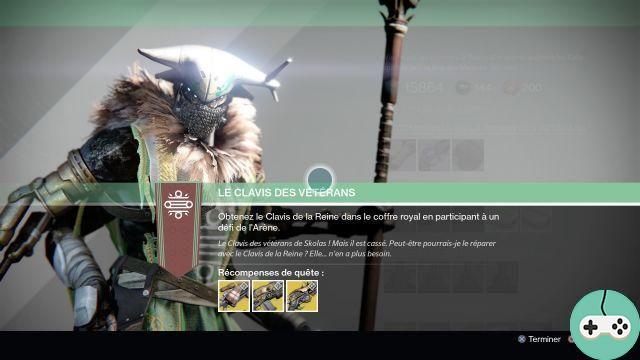 Destiny's second DLC "House of Wolves" added a number of new exotic gear upon arrival. Obviously, this equipment also marked the arrival of new weapons that we can obtain thanks to a new exotic contract named The Veterans Clavis. 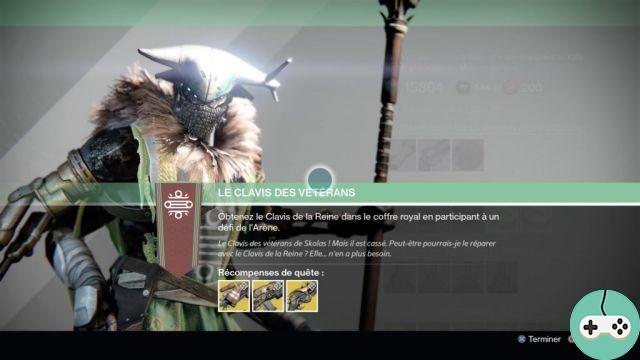 First of all, how do you get this famous contract? Well, it's quite simple. All you need to do is complete a Veterans Prison in 35 level (or from 34 level). Note that since a recent patch, it is very rare, if not almost impossible to have this contract at level 34 and that it is not certain that you will have this quest for sure by completing a level 35 Prison.

You will have to complete several stages in order to be able to hope to obtain one of the new exotic weapons of the second DLC. The first step is very easy to accomplish, but it is not the least important of all. Once you have the Veterans' Clavis, you will be asked to bring it to Variks which is located on the Reef. When this is done, you will be asked to choose a weapon among the three that will be offered (see image above). 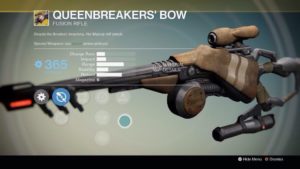 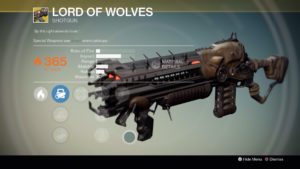 The first weapon you can choose (left weapon) will be theArc of the Perjurers, which happens to be a new type of secondary weapon that has the characteristics of a sniper rifle but also has a load time like on fusion rifles. In terms of the capabilities of the weapon, it has first of all the Hip Shooting which therefore increases the accuracy of the weapon when shooting from the hip and Third Hand which improves target acquisition.

Now let's move on to the second weapon (right weapon), which is the Lord of wolves. This shotgun is also a secondary weapon which is characterized this time by a rate of fire that is simply devastating. At the level of these capacities, we also find the Hip Shooting which like on the Arc des Perjures improves the precision of the weapon during the shots to the hip and the Caress of the Devils which on each kill restores our nearby allies with +3 recovery for 30 seconds. 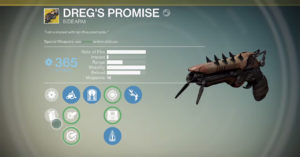 Finally last weapon, the Promise of Scrap, it is about a pistol which is again a secondary weapon. Note that pistols have been added with the House of Wolves extension. In terms of abilities, this weapon has first of all Tomb Raider, which for each melee kill gives a chance to refill the magazine and then comes the ability Lightning Balls which allows bullets to ricochet and otherwise improves target acquisition. 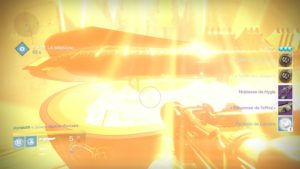 Once one of these weapons is selected, you will then need to obtain the Queen's Clavis in the vault of the Veterans Prison regardless of the level, so I advise you to do the Prison of 28 level because easier and less time to do especially since you may not get the Clavis on your first attempt. Note that you will need a key to the treasure whenever you want to open the safe. The Queen's Clavis in your possession, you just need to bring it back to Variks and this is where you will have to be patient. 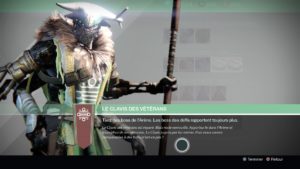 Indeed, once the Clavis is delivered to Variks, the rest of the quest then tells you that it will notify you when the Clavis will be ready and this is where you may or may not be lucky, because you will have to wait. between 24 and 72h before Variks calls you. For my part, I received the rest of the contract after 48 hours. Once the Clavis is back in your hands, you will be asked to acquire 1000 points in Arena (Veterans Prison).

Each Boss will give you points, here is the number of points given according to the level of difficulty. Boss level 28 gives you 75 point, Boss level 32 gives you 250 point (Secondary Bosses give 75 points), Boss level 34 gives 350 point and the level 35 Boss gives 450 point. A little advice for this step, launch a level 34 Prison and kill yourself. Once the final Boss is killed, you will be able to finish the contract more quickly by doing this technique afterwards. Be careful though to commit suicide before the scoreboard arrives.

Once this step is completed, all you have to do is collect the weapon you have chosen previously from Variks.

I therefore wish you good luck Guardians and may the Traveler watch over you!