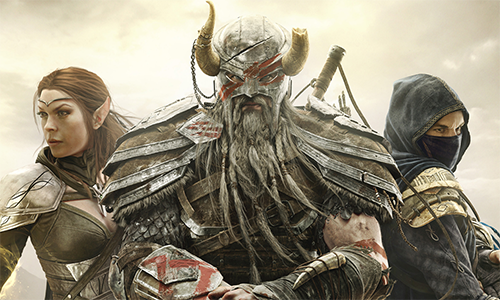 Here is the first guide dedicated to classes in The Elder Scrolls Online! Today we're looking at the dragon knight and a possible way to ride it, which is proving to be fun in both PvE and PvP. So I will present this guide to you in different stages, approximately every 10 levels, in order to show you the progress of this flaming dragon knight. I would like to point out that this is only one of the many ways to build your character, the game leaving a lot of freedom on this point.

The beginning of the adventure

It's time to start our great Tamriel adventure. Before starting the first quests, you must equip yourself a minimum. If you don't have any resources in the bank, I advise you to go kill some critters and collect some plants to equip yourself with leather and cloth armor and a 2-handed weapon. When you get to level 6, your skill bar should look like this:

Let's take a look at the skills:

At this level, the technique is quite simple, you rush at the target using critical charge, an incendiary strike blow, then a big two-handed weapon blow to finish off your target. You can then move on to the next one.

At this stage, invest all your points in force, at least up to level 15. You can then invest the points in Magic and a little in Health.

Well, here we are at the gates of level 15. Your skill lines should be between 20 and 30, which gives you a little more leeway regarding your skills. Your skill bar should now look like this:

Explanation on the bar: at this stage of the game, it is not uncommon to see groups of 2 enemies appear, sometimes 3, which changes your approach a bit. As before, we start the fight by Trampling, which will sound your first target. If there's a second enemy, inflict Flaming Embers on them and chain up with Volatile Armor. By the time you finish your first target (mages in priority), Burning Embers will give you healing and your second target will have taken damage with your volatile armor. Finish your first target with your 2-handed weapon (heavy attack or Ravage), then deal with the second with a Ravage followed by a new trample.

Dragon Blood is there to help heal yourself when needed, and the ultimate will be useful for groups of 3 enemies. As this bar is a mix of vigor and magic, you will normally never be short of power until the end of the fight.

2 weapons, for twice the fun

From level 15, your second weapon slot becomes available, which we will therefore use with a fire destruction staff. Forget ice and lightning, you will swear by fire!

It's a bit difficult part of the game, because you have to climb several skill bars, and therefore several associated lines. The high-level Fire Staff specialization will require you to level up the Staff of Destruction line to level 50, so you'll need to get up to speed fairly quickly. However, up to level 25, I advise you to finalize your first two-handed weapon specialization on difficult fights and keep the fights and easy quests for your second specialization. At this point, you have to invest your points massively in magic while keeping your armor mostly in the middle.

At level 25, your bars should collect at this:

It's starting to get interesting and you're going to be able to move forward at a steady pace with these bars. Let's detail all this:

Let's move on to the explanations. The first bar is at its peak and will allow you excellent DPS on small groups of enemies and bosses while maintaining very good survival. Attack the first enemy with a trampling then follow on a tongue of fire. If the enemy is not dead, finish him off with Executioner. Chain the next enemy with Ravage (or Trample if he has moved away) and again tongue of fire / executioner. Green Dragon Blood is handy for increasing your health and stamina regeneration while healing you. As you will be more specialized in high level magic, it will prove to be very useful to switch from a Multicast phase to a Single target phase. In the meantime, on bosses, mainly use your weapon skills and keep magic to heal yourself and regenerate your stamina. The tongue of fire spell is simply huge, especially when paired with Ravage or Trample.

The second bar is far from what it will end up being, and at this point you will quickly run out of magic. For the moment, set aside fairly easy fights. This bar does not use stamina, so you can sprint towards your targets to start the fight. Devouring flames from the start for fire enhancement, then searing talons to trap your enemies, reposition yourself and set up your elemental bulwark. Finish off enemies with staff attacks or repeat the Talon / Rampart operation.

For the following levels, you will have to think slowly about reversing your pieces of armor to gradually move to a majority of fabric pieces, to promote your magic. Around level 35, you should have enough magic and magic regeneration to upgrade the Multi specialization to primary.

Or more precisely the veteran levels and the long quest for the famous rank 10 (already soon obsolete with the arrival of Raidelorn). At this point, you ideally have 5 pieces of light armor and 2 of medium armor, with bonuses in magic 3/7, life 2/7, and stamina 2/7. Jewels will grant you magic and stamina regeneration buffs or spell cost reductions if you've reached the regeneration soft capes.

As you can see, the first bar has not changed, only the second bar has changed.

Here is our bar for the finalized area damage which will allow you to do big damage on large packs of monsters. Here, no need to rush on the targets, a flaming stick on different groups will make them come towards you. Rush over enemies that strike from a distance and prepare to welcome all these little worlds with devouring flames. Then immediately launch gasoline capture, which must be restarted every 3 seconds (capture, spell, spell, spell, capture ...). This is what will keep you afloat alive and in magic (especially in magic). Once your targets are gathered, it's time to imprison them with Searing Talons and char them with 2 elemental circle hits. After this first cycle, some healing may be necessary, so Green Dragon Blood, then again Essence Capture, Elemental Circle until the end.

Capture essence will allow you not to run out of magic too quickly, while the spell of the staff "Elemental Circle", coupled with the level 50 passive "Expertise in destruction" will ensure constant regeneration as you go. of the death of enemies. With this specialization, groups of 12-15 standard enemies are easily successful. For elite enemy groups, such as Giants or Trolls, I suggest replacing Searing Talons with Volatile Armor for better resistance to hits. On groups like this, your best bet is to stay planted in the middle, put your essence back on right after your magic regeneration, and regenerate yourself with green dragon blood. A few strokes of the Elemental Circle and you're done.

This template is quite valid in PvP with a few modifications. For the single target, no change to make, the sequence Trampling, Tongue of fire, Ravage then Executioner will overcome almost any enemy, by never leaving him the possibility of getting up. You still have to attack first!

For the multi-target, Burning Talons will be useful in preventing enemies from fleeing. On the other hand, you can consider replacing Devouring Flames with Tongue of Fire, just to quickly end a more resistant player. The additional effect will be triggered precisely by the immobilization of the Searing Talons.

Here we are at the end of this guide, I hope you enjoyed it. Feel free to suggest variations or other guides, we will be happy to publish them.

add a comment of ESO - The flaming dragon knight