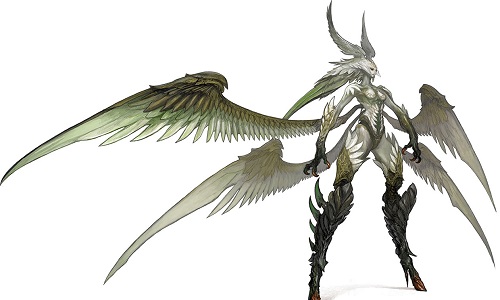 To help you collect some valuable gear before you do Titan, here's a video from Garuda. The only difficulty of the boss being the placement of the tank, treat yourself!

After the preview of what awaits you in video, here is the unfolding of a fight against the villainous Primordiale.

Garuda turns out to be a little more difficult than Ifrit. For this fight you will need 2 tanks 2 Caregivers and the rest of DPS. A tank will be dedicated to Garuda while the other will be used to take care of his sisters that will appear during the fight. The latter will remain in Sword Oath until he has to take care of the sisters where he changes to Shield Oath.

For the start of the fight, position yourself as if you were facing Garuda during the epic: the tank at the bottom where Garuda awaits you, the Caregivers indented on the left. As to DPS, they never have to face Garuda. 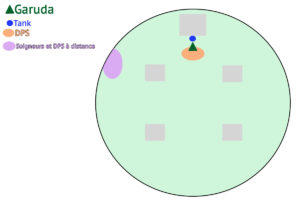 For this first phase, Garuda will disappear briefly and then return to inflict a big attack on you. Hide behind the pillars to avoid damage. Move immediately after his attack so that the pillars do not take additional damage. As with epic combat, lacerating feathers will appear that your DPS will have to quickly eliminate.

After the Garuda feathers disappear once again: hide behind the pillars. News feathers to be eliminated then appear.


This last wave killed, keep fighting Garuda. She will disappear again only to find herself in the middle of the arena and summons a new series of feathers. You can ignore this last burst.

The Primordiale will then be placed at the middle of the arena while pronouncing his famous sentence "It will bleed !!". Get together behind a pilier. The more stones the pillar has, the less damage you will take. Your healers must be ready to initiate zone healing. With good timing, they can heal you right after the attack has passed. Using the Stoicism Action (inherited from the Occultist) can help them stay uninterrupted while casting their healing spells. As soon as the heal is over, shift to the right while the tank replaces Garuda correctly.

After this big attack, we move on to second phase. The main tank stays a bit away from caregivers and remote DPS. Garuda begins to make appear high wind areas. They are circular and green. You will be temporarily sheltered from these areas by placing yourself on the left side of the arena. They disappear as the fight progresses while new ones are placed.

Garuda will then disappear briefly to summon these sisters: Chirada et Suparna. This is where the second tank intervenes: while the DPS take care of the one at the green link (careful), he attracts to himself the other sister who has the red link (increases Garuda's DPS). While alive, Garuda deals significantly more damage. It's best to have one healer looking after Garuda's tank while the other focuses on DPS. You really have to send as much care as possible here. To make things worse, you have to pay attention to the placement of the group: the two sisters should neither face the main tank nor the healers. It is therefore up to everyone to ensure that they are in the right place. 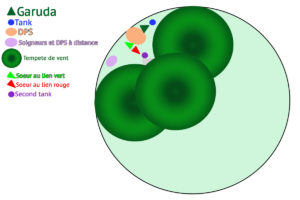 The two sisters eliminated, we will enter a third phase.

You will have to be mobile for this phase. The whole group will move in circle always leaving a certain distance between the main tank and the rest of the party. When the storm to the left of the main tank disappears, it must advance to the left. The rest of the group follows (and does not pass never in front of Garuda). New feathers fall. The DPS is content to eliminate only the Silky feather. 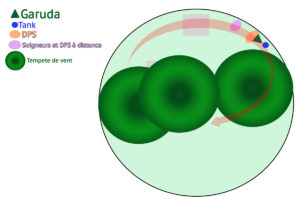 Garuda will then generate a zone of calm in the middle of the arena. Everyone has to go there. As usual your main tank will stand at one end, Garuda with his back to the rest of the group. We enter the last phase combat! Garuda's sisters return: the strategy is the same as before.

Subsequently, the zone of calm disappears. Your tank will move to the left edge of the arena. New feathers are coming, it's up to the DPS to kill the Silky feather. Depending on how fast you descend Garuda, you may still have to face these sisters. Do not hesitate to use the Transcendence 3 a Dark Mage or one of a Summoner to quickly kill both sisters.

Stay focused and you will eventually get there! Don't worry if we don't get this fight right now. It takes a little time to remember all the phases and movements to be made?