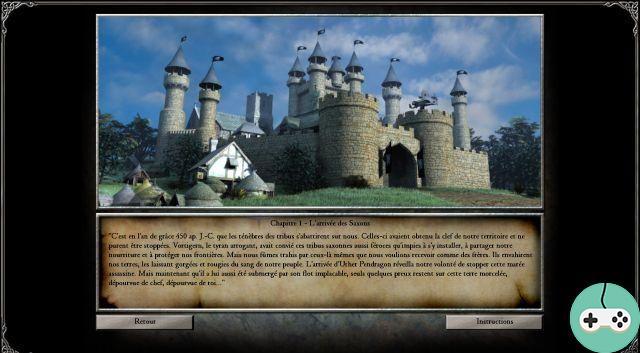 Stronghold Legends: Steam Edition was released on September 15 on Steam. This new version for the Valve platform is enriched both in content and in new features.

The Stronghold saga begins in 2001, when the first of the name was born, developed by the Firefly studio (no, they don't live in a spaceship). The press praised this clever mix of city builder and RTS. Then came the following year the equally popular Stronghold Crusader.

7 years have passed, seeing 7 games playing and a development drama in 2008. It is not because we have had success that we are safe from trouble! Never mind, the small remaining team rolled up its sleeves and developed Stronghold Kingdoms, its free-to-play, which was to be a great success, going as far as staying 2 years in the top 10 of Steam's F2P.

Now we come to our Stronghold Legends. Initially released on PC in 2006, this opus tells us, still in this RTS / City builder genre, the story of famous characters: King Arthur, Vlad the Impaler or Siegfried of Germany. These three factions each had special units and skills. For example, you could swing werewolves above the ramparts of a castle. Class, right?

This Steam edition keeps all this great content but in a remastered version with other additions: a multiplayer mode, the integration of the workshop, new maps, a digital artbook, trading cards and, icing on the cake, all the campaigns. DLC.

Am I ready to take all this in hand, I who have little experience in the field of RTS? Whatever, on paper it makes me want, let's embark on the adventure!

After choosing Solo mode, other choices are possible:

The last mode is perfect for me!

The game is in spanish, both the text and the voice which teaches me the basics of the gameplay.
After learning how to handle the camera, it's time to build a first building at my castle. It needs a reserve to store vital resources and an attic to store food. 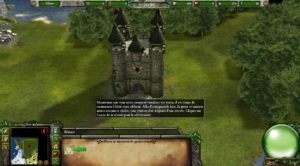 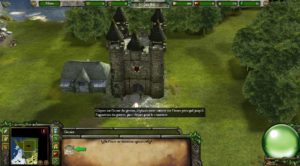 The logistics side settled, I was told that the number of serfs working at the castle depends on the popularity of the domain. The latter is based, among other things, on taxes and food rations granted, so it must be maintained at a good level to attract new serfs.

I can then increase the rationing so that my fame does the same. I can see in the attic the food available as well as the number of months in reserve. Fame is important, it is used to invest in "large-scale projects". What could be better than good meals to be enjoyed? The tutorial invites me to build an apple orchard in order to have a diet made up of cheeses, obtained from the dairy built there recently, and apples. 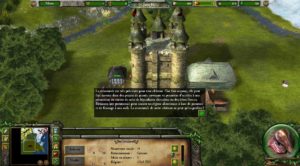 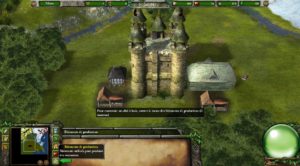 But for an apple orchard I need wood and for wood I need a wood shed. Once the stored wood piles up, another problem arises - all my serfs are busy, so new ones are needed. For that, it is necessary to build a hovel. These brave workers must be well accommodated! Finally new serfs come around the campfire, ready to see them assigned a task. I can finally set up the apple orchard. 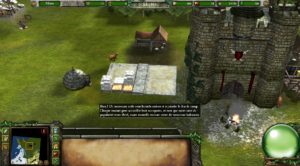 Now that my stronghold is running smoothly, it's time for the military aspect of the game. I'm building the armory and the weapon depot. The armory allows you to create troops. For the moment, my troop is very basic: 4 peasants armed with spears. I learn to move them and soon I beat the bandits and destroy their camp! The tutorial ends with taking a village. By annexing it to my estate, he will pay me taxes and send me the surplus of his apple production. 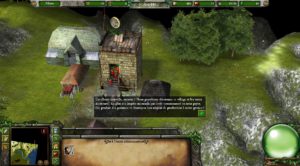 It's time to put my newly acquired knowledge into practice. I select Campaign of Legends and the game starts me off with Arthur. The presentation of the story is neat, the voice telling the story quite convincing. The atmosphere is there! 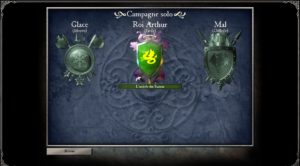 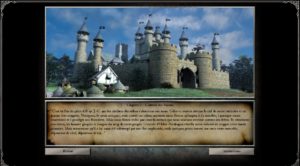 The following screen with several tabs: Instructions, Objectives, Tips and Initiation. I can also choose the difficulty. The advice has the particularity of being displayed only if you click on it. We therefore have the choice to read it or not. 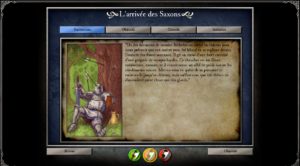 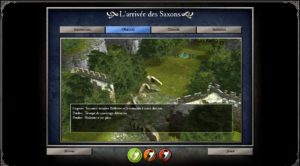 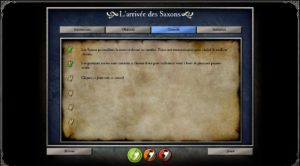 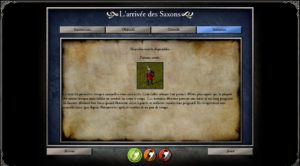 So I am going to pick up Messire Bédivère (on this beautiful autumn day, huhuhu.) Which is not far from my stronghold. The forest is full of enemies, you have to keep an eye on the patrols, avoid rushing stupidly into the heap so as not to kill my brave peasants too quickly. I get to him without worry. The return goes smoothly, except that Messire Bédivère has the speed of a turtle. His injuries must bother him!

When the mission is over, the narrator continues his story while a screen is displayed summarizing key figures. I killed 20 enemies and produced 105 goods. 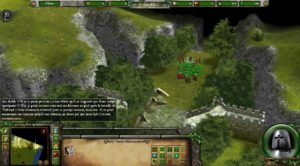 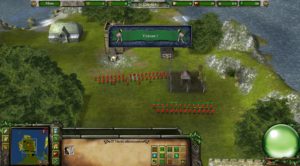 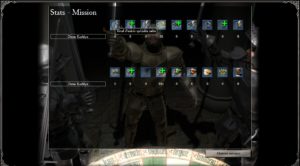 I continue my campaign and meet other legendary figures such as Merlin and Lancelot. The downside of these characters, but also of some military units, is their movement speed worthy of an amorphous snail. Annoying at first, I got used to it by reviewing the position of my troops over the course of my missions. Speaking of annoying things, let's list a few things: 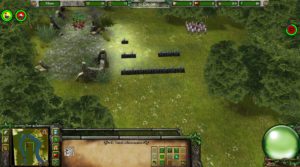 Congratulations, you have succeeded in passing the traps .. We left twenty dead.

New troops, but also new buildings are unlocked during my progress. Each campaign offers new things like pikemen, watchtowers, a brasserie ... The story side is very present, the voice taking care of the narration is at the top. The intonation is fair without falling into caricature. The sound environment is also a success, especially since we are on a game that is no longer very young! Sounds of fighting, voice of warriors, ambient sounds. Moreover visually, it ages well too. We have beautiful colors, a level of detail not bad at all when we zoom. 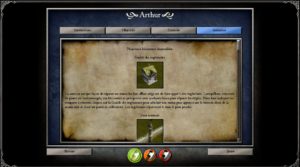 The difficulty is also increasing, although I play easy. I am currently breaking my teeth on a campaign where flying witches put me in misery. So, it's time to rage and try something else to wrap up this preview!

This is the last game mode I'll be testing for you, otherwise with my mega-newbie progression rate, this preview will be complete within a year! The Trail of Legends consists of "fighting in a series of linked Skirmish games". As the explanation indicates, this is a series of fights. But before conquering the opponent, you must first develop your own stronghold. 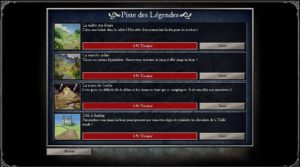 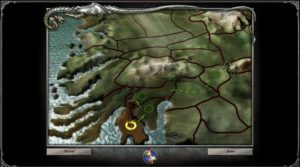 There is a rather funny feature: wielding a sissy. It's a way to avoid a mission that we fail to complete. 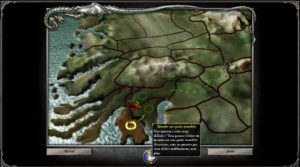 As with the Campaign mode, you start by placing your reserve and your attic. It is then up to us to develop our stronghold. The buildings are much more numerous than the beginning of my Campaign, there is for example a field of wheat, a mill, a bakery ... It will be necessary to develop quickly, the adversary will not be long in coming to test our resistance.

Are we going or not?

Stronghold Legends: Steam Edition is clearly a game that will delight fans of the genre, thanks to its ability to combine city-builder, RTS and this storytelling aspect that completely immerses us in Campaign mode. Even though I have a lot of trouble making progress, it's very absorbing.

The difficulty is present, I dare not imagine what awaits the players in the hard mode! Despite the presence of a tutorial, some information is missing. Satisfying its population is not easy, managing food and popularity is a real challenge. On the one hand, there is a lack of data, on the other hand, the data we have remain a little vague and we tend to panic for a yes or a no.

Let's not forget that the game was initially released in 2006 and that it remains beautiful despite its great age!

SWTOR - The Datacrons on Voss ❯

Pankapu - Glimpse of a dreamlike and dark world