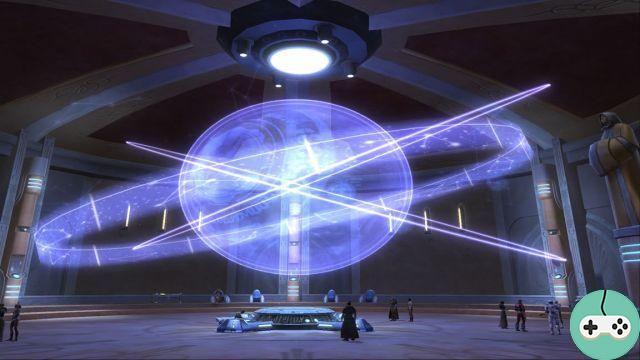 When one thinks of the Core, the first planets that come to mind are very famous worlds of the Galactic Republic. Like Coruscant, Corellia or Alderaan. Some may cite Tython, but that would be forgetting that there are two regions called the Core. On the one hand, the Galactic Core, which is effectively the seat of the Republic. But it is only a ring which surrounds another sector, which contains the true galactic center. A region very close to these great centers of power, but they very often express their contempt by including it in their Core sector. Yet very few of the worlds present here are truly part of the Republic. And the vast majority of this sector is largely unexplored. 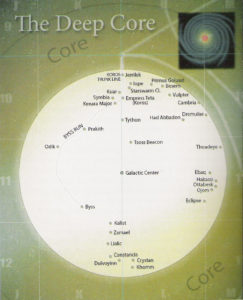 The center of the galaxy is a black hole. And he's not the only one in the Deep Core. There are also several very close and very dense star clusters. Both make hyperspace routes very complicated. In this labyrinth, it is impossible to travel in a straight line. Not to mention that these disturbances are not stable. They evolve, giving rise to new problems. The roads of the Deep Core can easily collapse, and it has happened very often. Which does not make you want to travel in this sector of the galaxy. However, there are several potential areas of interest in these worlds. Many were occupied by the Infinite Empire of the Rakata, who left various artifacts there. There are also the Je'daii worlds, where the ancestors of the Jedi lived. We even have cases referred to as having served as a fortress for Sith lords. Little explored territories also imply a certain number of hiding places for those who have things to conceal. Even places to rebuild your life without the past coming to hold you accountable. 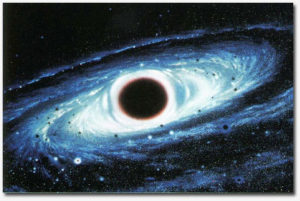 The Republic therefore prefers not to venture too far into the Deep Core. She prefers to be content with worlds on the outskirts. Planets and systems with stable paths and whose proximity to the Galactic Core makes them very similar culturally to these neighbors. Most have been colonized by humans or other species common in the surrounding area. The most famous example is that of Empress Teta. A system of seven planets famous for its carbonite exports. In the years leading up to the Great Hyperspace War against the Sith Empire, the political mistakes of a Supreme Chancellor of the Republic resulted in a war between these worlds for the predominance of a single power. Koros, the victor, will be a spearhead in the ensuing war against the Sith, and its leader will gain enough prominence to participate in the discussions deciding the future of the Republic. Just like the representatives of Corellia, Aldérande or especially Coruscant. His planet and his system were renamed after him. And even if his successors have lost this influence, it illustrates well the links and similarities between this periphery of the Deep Core and the Galactic Core.

For the Republic, the current gem of the Deep Core is Tython. The heart of Je'daii worlds, which do not officially bear this name. Moreover, their inhabitants would take it badly. They were indeed built in opposition. Several tens of thousands of years ago, several automated space stations abducted Force-sensitive individuals from all corners of the galaxy to take them to Tython. They thus founded the Je'daii Order, and their descendants took over. But not all of their children had the aptitude to become Je'daii, or even the envy. They therefore left the planet to colonize the surrounding worlds. Not having Hyperspace, they didn't get very far. But they have developed new cultures of their own on these worlds. After the Force Wars, the Je'daii-turned-Jedi abandoned a devastated Tython and moved on to other areas of the galaxy. Leaving behind them these worlds which anyway no longer wanted these bulky neighbors. The Republic has little interest in seeking out these worlds, but they do exist. It is therefore not uncommon to come across in the Deep Core a wookie, a pure-blooded Sith or other race of the Outer Rim but which reacts differently from the culture of their original planets. 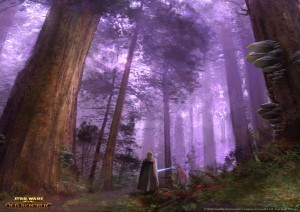 The Deep Core also counts its number of planets with its own races and cultures. Like for example Byss, the planet of the Abyssinians. A species well known in the criminal circles of the Bordure. And some have even already been taken into slavery on Korriban. But very few are able to locate this world to visit it. And the Republic makes very little effort to encourage trade. The path to get there is called the Passe de Byss. And there are things to do there. The rakatas left temples there which attract the Dark side. Couldn't Jedi come and come and heal this influence? The planet would then really have something to transform into a seaside resort. But no one is interested. Then these worlds wither away, as if they were abandoned. 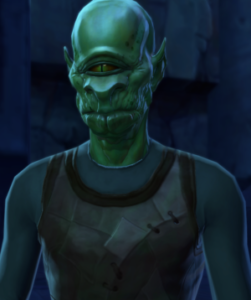 Due to its proximity to the key worlds of the Republic, the Deep Core therefore had the means to become one of the most famous places in the galaxy despite its geographical difficulties. But galactic exploration has turned in the other direction. She hardly considers this area to be in-depth, either geographically or politically (it's incorporated into the Galactic Core on many maps). This small area therefore remains as mysterious as the gigantic Outer Rim. It is one of the paradoxes of the known galaxy. It could be summed up in a simple sentence: the center of the galaxy is a black hole.

Do you want to be up to date and know all the tricks for your video games? In gamesmanagers.com we enjoy playing as much as you do and for that reason we offer you the best tricks, secrets or tips for you to play non-stop. We offer you quality content and always updated to keep you up to date. That's why, in our website, you will find not only videogame guides but also tricks, secrets and thousands of tips so you can play to the limit. Are you ready to get it? Enter now and enjoy your videogame!
FFXIV - Means of communication ❯