It's a mess in the sky

The UPE maintained slightly tense relations with the Xi'An close to Terra in Sector East, and we were still quietly settled in Sector West. It was about to change.

The Tevarins were, technologically speaking, about 100 years behind the Humans. They were at the start of their space age. Tevarins adhere to steadfast warrior principles, honoring the virtues of honor and loyalty. They were not a bloodthirsty people, but they honored the art of war.

System State: An alien race named the Tevarins is present in Elysium IV. Although intelligent and at an advanced stage of its evolution, they have not yet reached our technological level. We recommend establishing a contact to suggest that they join the UPE. This is a great opportunity to evolve this species in the modern era. 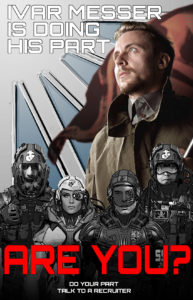 The UPE entered into contact with the Tevarins. They were not interested in establishing diplomatic relations or even in accessing our technologies. They were "only" interested in our star systems. This is how the first inter-species war began, like many past wars, on a different territory.

As the war with the Tevarins escalated, military authorities feared that the conflict in Sector West could trigger an opportunistic Xi'An attack in Sector East. An intensive recruitment campaign was therefore set up. Fortunately, a young and ambitious officer, Ivar Messer, caught the public's attention by standing out in the Battle of Idris IV. The UPE took advantage of this feat and made Ivar Messer the icon of the Great Western War.

SWTOR - Presentation of the investigation