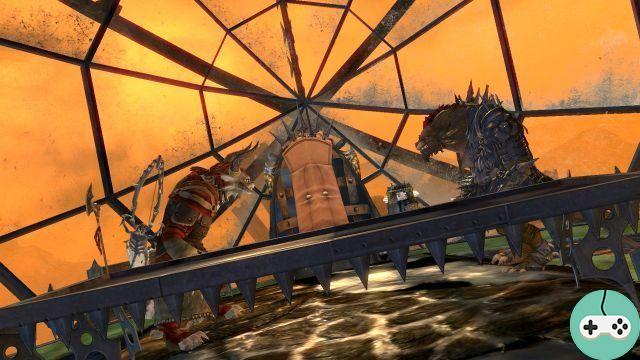 Our narrative designer Scott McGough introduces us to the delegation of Rytlock à Rox as to the coming of the Charr people to Queen's Jubilee. Braham also brings with her Braham, the hero Norn of Flame and Cold, where they fought together.

I invite you to read the Delegation. 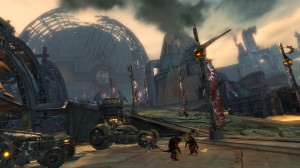 Frost was still flaunting when he was in the Black Citadel. Rox did not know if his albino devourer felt overwhelmed by the strength and confidence emanating from the soldiers of the High Legion, or if he was intimidated and trying to make a difference.

Either way, she was happy that at least one of them looked bold. Tribune Brimstone had summoned her to his office again and, as always, Rox felt a wave of panic wash over him. In a city filled with towering authority figures, Rytlock Brimstone surpassed them all. Notoriously impatient, hard to satisfy, yet it was him that Rox was going to have to impress to get what she wanted.

She had taken every precaution… When she woke up, she had joined her thumb to her index finger to form a circle and spit on it three times. She had put on her newest pair of boots and had come out of the barracks backwards to counteract the bad luck that might follow. She wore, on a chain around her neck, her two favorite good luck charms: the first piece of iron ore she had found and the steel soldier's ring that the Primus Drillbit had given her to celebrate her departure from the fahrar . She hoped that these efforts would suffice to obtain the favors of this capricious fortune-telling lady and enable her to prove herself. 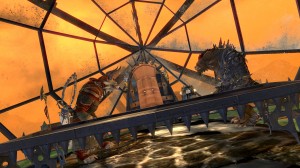 "Hurry up," she said to Frostbite. The tribune is waiting for us. "

The devourer whistled enthusiastically and stood beside Rox as they entered the Imperator's Heart, before climbing the circular walkway leading to the third floor of the gigantic metal sphere. Laria, Rytlock's aide-de-camp, was just coming out of the tribune's office.

Laria nodded. “But he's not in a good mood. Don't be smart. She glanced at the familiar, before adding, "And watch that damn critter." I don't intend to clean up his junk. "

Laria eclipsed herself and the devourer growled after her, her two quivering darts.

"You can't blame him," Rox told him. It was you who urinated on his boots. "

Rox's fingers twitched around his neck, alternating between the ore and the ring to make sure they were still there. "At the foot," she ordered Frostbite. And I don't want to hear you. I am not joking. "

Rytlock was standing behind his desk. Laria was right: with black eyes and tight jaw, the tribune seemed to be boiling with anger. As Rox approached, he took a sheet of paper from a pile in front of him and rolled it unceremoniously. [...] Continuation on the official site. 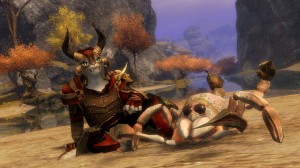 Do you want to be up to date and know all the tricks for your video games? In gamesmanagers.com we enjoy playing as much as you do and for that reason we offer you the best tricks, secrets or tips for you to play non-stop. We offer you quality content and always updated to keep you up to date. That's why, in our website, you will find not only videogame guides but also tricks, secrets and thousands of tips so you can play to the limit. Are you ready to get it? Enter now and enjoy your videogame!
WoW - Fiefdom - Building: Stables ❯