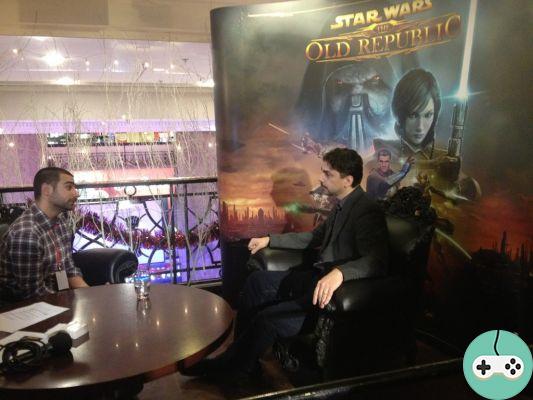 Between two signatures, we had the opportunity to speak with Emmanuel Lusinchi, Associate Lead Designer and ask him some of your questions. I had nothing to record, just a piece of paper to take notes as quickly as possible. So these are not Emmanuel's exact words but my interpretation.

As some questions have been answered in the topic about the future of SWTOR, you will find some of your answers there.

Is Bioware considering the implementation of a double specialization in the advanced class? (by Phillibert & Xavier)

The double specialization will be implemented a priori.

And why was the idea of ​​changing specialization between advanced classes abandoned?

It has its advantages and disadvantages. From his point of view, it is better to reroll to discover all the rich history of each advanced class and thus to create a different character if one wants to discover the other specialty. Allowing the advanced class change would risk diminishing player interest. Getting to level 10 is quick, and it's always possible to level up the opposing faction's mirror class in order to do something entirely new.

What will be the pace of the releases of upcoming patches and expansions? (by b95desang)

Although he is aware of a date, he cannot tell us anything about it. Just that the extensions will bring new content and new features. It had already been announced previously that a specific team from BioWare was already working on the future expansion.

What about the mini-games? Are there any module races planned in the next expansions? (by Skyhn)

No information yet .. but and here I quote: "There are Pazaak tables in the game!" Is this a sentence tossed or a piece of information?

A proposal was made on the forum to broadcast Hutball matches on giant screens in the capital. What do you think ? (by Skyhn)

The idea is excellent but it poses technical problems. The idea is to be explored, especially since it would allow to go towards the spectator mode which has already been requested.

Are there things you are worried about? More than you expected during development?

Yes, of course, but we don't talk about it!

No not right now. The game runs fairly well on Mac with an emulator so we won't be looking to make a special version for Mac.

Are you considering smartphone or other applications to manage certain aspects of the game remotely?

The game was developed with this in mind, so it is "fairly" easy to do. We are looking at it now. It can be expected that the applications developed will also be uploaded to the site.

Aion is going to switch to F2P and there are fewer and fewer subscription games. What do you think of this model? Is this being considered?

Both models are studied but no additional information.


What can you tell us about Satele Shan?

He's a very important character, that's for sure.

Will we be able to have him one day as a Companion (like his ancestor Bastila Shan)?

No, never, that's for sure.

There are a lot of non-playable races. Do you plan to add more?

Indeed, there is a lack of races, "something else" is expected. There will also be more character customization. The players have requested it and the developers are aware of and are working on these requests.

We have ripping procedures right from the game. That way we know what people like and dislike or what to worry about. We also read forums where a good idea will always be noticed. There are of course the fansites. And finally, we have spies in play. They play with you, in groups, in guilds and give us feedback on your experience!

add a comment of SWTOR - Interview with Emmanuel Lusinchi