ESO - Details on RvR in TESO 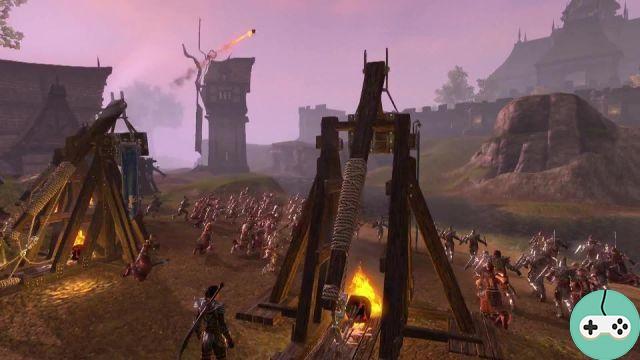 Zenimax, which recently released a short introductory film on alliance battles in Cyrodiil, didn't remind us at the same time of how TESO's RvR worked in detail. 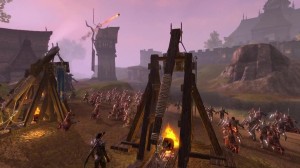 Indeed, it is not only the mass combat or the attacks of forts which are only the visible face of the RvR but are the result of a whole set up and tactical choices. Here are some reminders on what we know:

- The campaigns are named after towns of the Elder Scrolls. They can accommodate up to 2000 people each.

- Your guild and / or your character must make an initial choice of affiliation to an existing campaign. Rankings are specific to each campaign as well as the distribution and ownership of each of the campaign forts.

- Each campaign has its own ranking, there is different emperor and dominant faction per campaign. By side effect, you only benefit (in PvE as in PvP) from the bonuses / penalties inherent to the campaign on which you depend.

- The duration of the campaign is between 30 and 60 days. At the end of this time, alone the ranking is reset. The properties of forts never expire in time.

- It is possible to change campaign but this is not done "for free" and you will not be given priority over a campaign where your friends (guilds) are not.

- Cyrodiil is structured in 4 geographic parts : a territory for each alliance and the central (small) part which corresponds to the Imperial City island (contested territory, not available at the start of the game).

- Each alliance hasa starting area at the edge of its part in Cyrodiil which serves as an entry / fallback point.

- Each geographic part of the alliance is "isolated" from its neighbor by natural boundaries (rivers or mountains) which are pierced by Passage points, three per border, which are voluntary bottlenecks between the territories. These Points can be for example bridges or outposts leaning against the mountain, which are not alliance forts but can be defended or attacked by players to defend or cross borders.

- There is 18 forts in all in Cyrodiil, 6 per territory. The imperial city is itself surrounded by 6 forts (two by alliance).

Forts and other buildings of interest

- Each fortress has three types of dependencies underlying geographic proximity: a sawmill, a farm and a mine. The management and / or the capture of these dependencies alter the defensive or offensive capacities of the fortress.

- A players guild can surrender owner of a fortress in the colors of his faction (we do not yet know how).

- A guild with a fort will be able to extend its "guild store" to players of its own faction but outside the guild ("physical" sale from the fort).


- The forts are linked together via a mesh system of routes, supply lines allowing the teleportation players on each fort of this mesh as long as the "segments" of this mesh are not cut due to an attack or a "strategic" fort conquered by the opponent, which would prevent teleportation.

- The Scrolls of the Elders of each alliance are kept in dedicated buildings (temples, shrines?).

- The strong hold is not not the best source of alliance points. So the habit of other RvR games, consisting in "artificially" changing the forts of hands to inflate their PvP points, will have only a very minor effect ... To move up the rankings and claim the title of emperor, you have to kill or "support" (heal) in PvP battles (massive or solo).

- It is possible to use siege machines to destroy the walls or doors of forts. We know 4 types of these machines: trebuchet, catapult, ballista and ram.

- Siege machines are transported in player inventory. The notion of weight does not exist, a machine only occupies one inventory line out of the total that you can transport (50 items at the start of the game).


- Among the items used for a siege, there will be advanced camps which allow your alliance to "place" an encampment near the enemy fort, allowing a certain number of regenerations there, but these items are not given ...

Scrolls of the Ancients

- Scrolls of the Ancients are very important relics in Cyrodiil. Each alliance has two and they are kept in special temples in the territory of this alliance.

- To steal these Scrolls, it will be necessary for the enemies to be able to penetrate into the opposing territories, into its temples, which is not easy. Bringing and storing enemy scrolls within your own alliance allows you to unlock bonuses for their entire alliance (in PvP and PvE)

- The appointment of a country emperor is conditioned by the fact that an alliance surrenders master of the six forts that surround the Imperial City. The Crowned Emperor will be the top ranked character in his alliance.

- Emperors have a skill tree unique to them and the simple fact that there is an Emperor within your alliance unlocks additional bonuses for the entire alliance.

- A deposed emperor retains jurisdiction that he acquired in his dedicated tree, during his "mandate" but the powers and effects are very dimininués.

Have more questions about RvR? Would you like more details on the points in this article? Do not hesitate to comment on this article !

add a comment of ESO - Details on RvR in TESO