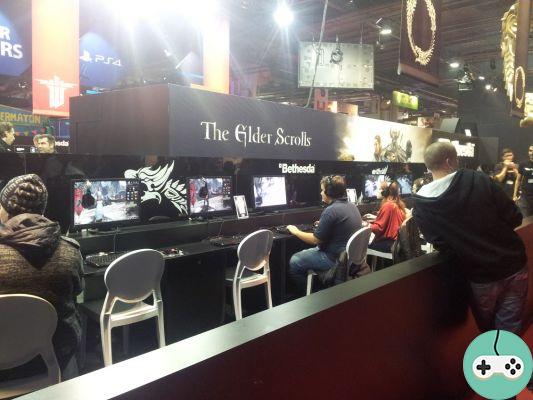 Present with Wolfenstein: The New Order, The Elder Scrolls Online is this weekend at the Paris video game show, Paris Games Week. Aayla brought us a photo at the risk of her life: 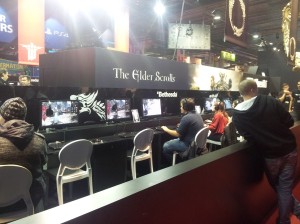 Many images were posted on social media, including Twitter. Small anthology to see the stand from all angles!

At # PGW13 we test elder scrolls online at the Bethesda booth! @TESOnline_fr pic.twitter.com/6ZgGBHasST

Test of #ESO with my cabbages! 3 factions ... beautiful revival of DaoC.A us the PVP people! #PGW pic.twitter.com/m5OT7vfqjX

We will be present with #ESO throughout @ParisGamesWeek, don't forget to drop by! pic.twitter.com/dWz1cNa0QS

If you want to try your hand at #ESO, don't forget we're at @ParisGamesWeek until tomorrow night! pic.twitter.com/okBPKSRQUy

Cosplay is not mandatory to come and say hello to us on the #ESO booth during @ParisGamesWeek! pic.twitter.com/8bR01zKGRG

The #ESO team will be there for you throughout this three day weekend at @ParisGamesWeek! pic.twitter.com/OPrczQEFju

The calm before the storm, #ESO at # PGW13. RT @ Jeremy_Eg Elder Scrolls Online before opening that's it! pic.twitter.com/pXzxHm8Udt

Soon the end of @ParisGamesWeek, but we met some # ESO fans! Are you past this week? pic.twitter.com/n3Cl67Cnab

And the game won an award at the show: best MMO!

After E3 and Gamescom, it's the turn of Paris Games Week to reward #ESO! pic.twitter.com/3sYfaLF33m

Did you have the chance to brave the crowds to test the game? Or would you rather wait for it to arrive in your living room?

add a comment of ESO - TESO at PGW (maj)