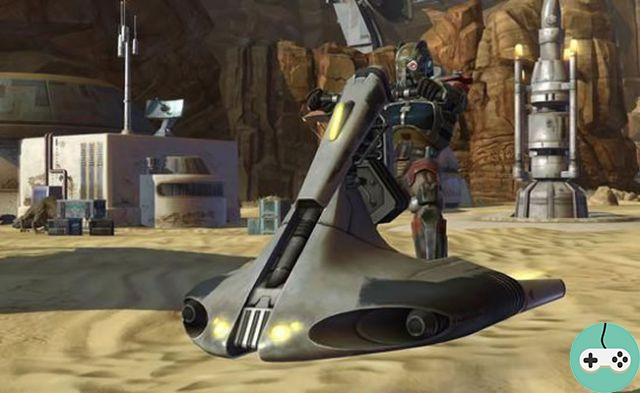 You will also find the vehicles missing during the updates at the end of the list. It is also possible, through inheritance, to reduce the level at which one can buy a license:

Then you have to buy vehicles whose cost varies from a few thousand (8000 credits) to more than a million credits! I will try to make a point to help you make your choice. There are also mounts that can be crafted with the Cybernetics profession, which can be collected in operations and hot spots or in the f2p store.

Although more expensive, 110% vehicles are much more resistant to enemy fire, so you will no longer be slowed down in your mad rush through enemy troops!

There are only a limited number of mount vendors:

- the Market at the fleet station : the speeder merchant, the dark side merchant, the light side merchant in the "Galactic Market" district
- the VIP lounge, above the Cantina, on the fleet station: the VIP merchant
- Tatooine : Mos Ila or Anchorhead, next to Taxi station
- Tatooine : the Merchant of social objects in the Cantina in Mos Ila or Anchorhead
- Tatooine : black market merchant in the PvP area (coordinates -300, -850)
- Alderaan : Thul Palace or Organa House, next to the Taxi station
- Alderaan : The Social Objects Merchant at the Thul Palace or the Organa House
- Quesh : Republic Base of Operations or Imperial Garrison
- Belsavis : The Mission Support Merchant (Lieutenant Plodd) at the Domination Outpost
- Voss : Nuen the Honest in the Alien Enclave of Voss-Ka

You can find practically all the vehicles in the tab Collections from now on !