Book of Demons - A Hack & Slash in a Book 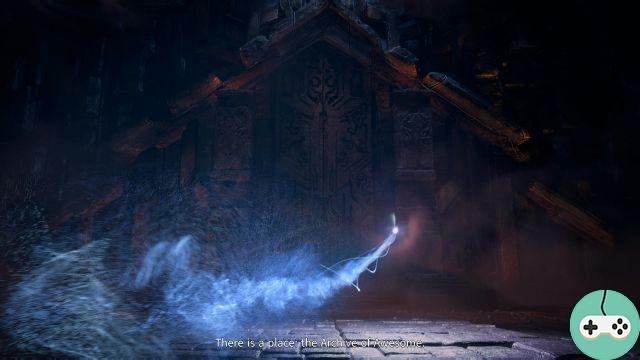 Book of Demons is a Hack & Slash, developed by Think Trunk, which stands out from its competitors by a beautiful visual touch and a very practical gameplay: it adapts to your playing time! 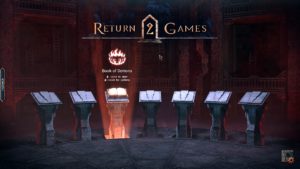 From the start, you can choose the language, it is also specified that the translations are carried out by the community. At the moment I am starting with English. 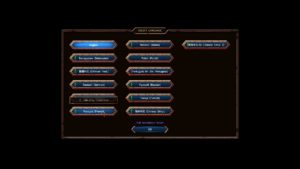 A short introduction introduces me to a place, the Archives du Merveilleux, where many stories are stored. 7 of them are particularly worth the detour, and I am dwelling on the one called Book of Demons. 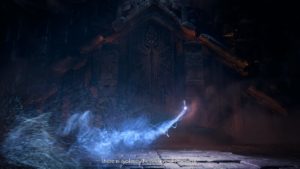 Before going into said book, I take a quick tour of the settings. I see that I have a profile with an avatar. These avatars can be unlocked as you progress through the game.

Side options, I am entitled to the base, with a small “extra” menu which is aptly named: it includes the activation of the Razer Chroma and Logitech Lightsynch effects. 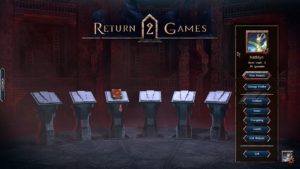 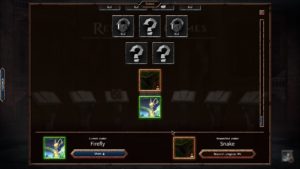 After entering the Book of Demons, the story reveals itself in the form of an animated book. The paper comes to life, it's really beautiful! Maybe you had a book like this when you were a kid, where the pages were showing off?

A hero returns home to find wasteland. An evil force has ravaged the region. Ultimate Evil is awakened. This little cinematic is a success. While the pitch remains classic, the style is highly sought after. 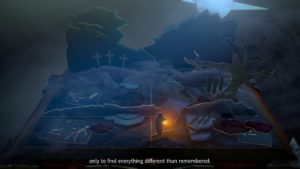 After this promising start, it's time to create characters! Okay for now, we should rather rename that to "define a name for your avatar and choose your game mode". Note that only the Warrior is currently available. The other 2 classes will be unlocked when your Warrior has reached level 5. 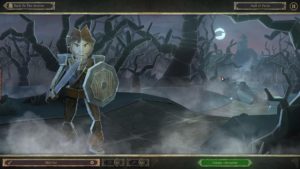 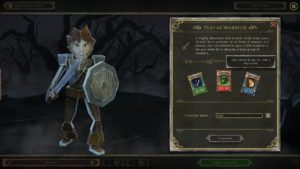 Being able to choose your difficulty is welcome. Each game mode is explained: 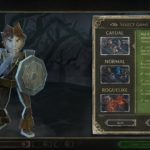 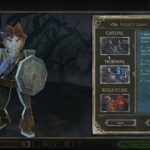 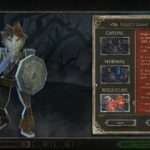 I immediately appreciate the character dubbing (in English), as the intonation is just what only increases the desire to delve into this book. After being greeted by the survivors of the village, my hero goes into battle. The tutorial invites me to discover how to play, Book of Demons wanting to be a different Hack & Slash. He will be omnipresent throughout, explaining to me the powers of enemies, the intricacies of gameplay. There is a lot of information to remember, but it is really very well explained. 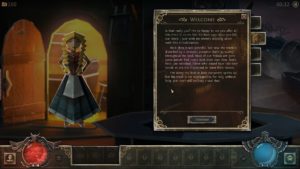 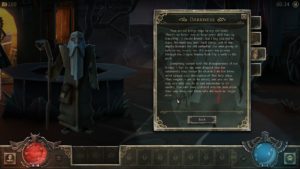 Moving is not out of the ordinary, my zone of interaction with what surrounds me is delimited by the halo of light around my character. To attack, just click once on the target to activate the auto-attack. It remains slow, so it's best to click or hold down to do more damage.

The learning continues: when something interesting is in the corner, an icon will appear at the top of the screen. This time it is a safe. This contains my first carte ! This is one of the peculiarities of the game: you use cards to activate special skills, items, etc. We have an inventory and locations with shortcuts, from 0 to 9. The tutorial specifies that we can unlock more locations by contacting the Legend in the city. 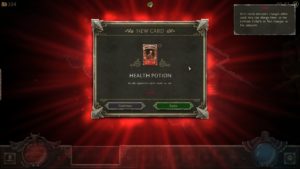 There are several types of cards: items, artifacts (what you might also call equipment), and skills.

Object cards can contain several (for example: 4 healing potions) and it will either be necessary to reload the map in town if you have used everything, or to have a little luck and find these items in the dungeon. The other way to heal is to drink from the fountains. You can also go back to town and talk to the healer.

The artefacts are also to be equipped in your bar. They require mana, but those mana allocated to equipment cannot be used for your skills. A balance will have to be found between the two. The good news is that you can change your cards at any time (when you are in inventory, time is almost at a standstill), and thus adapt your equipment and attack to suit your enemies. .

Finally the skills appear as different techniques that you can use. Powerful blow removing multiple hits from the enemy, knocking back monsters, etc.

All cards have a Standard, Magic, and Legendary version. Their effects can therefore differ and be more or less powerful. 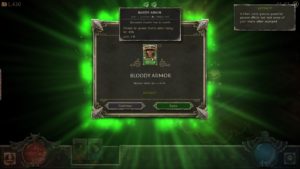 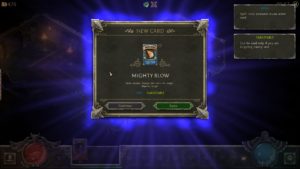 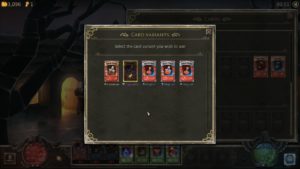 Each character in town has its uses: in addition to sharing some information with you, they have very useful skills. The innkeeper owns the Magic Cauldron : when you gain a level, you get a point. This point can be spent to gain more health or more mana. If you choose to spend it on health, then one mana point will go to the Cauldron. The Cauldron also stores trophies, loot found in the dungeon. When you decide to empty the contents of the cauldron, you will be asked for a certain amount. Be careful, it increases over time, so you have to think twice before doing it. In addition, the cauldron trophies are lost when you die. 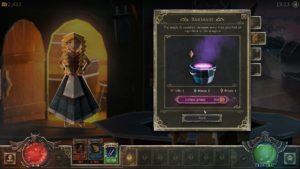 The wise man can identify the magic cards you get and unlock (for a fee, he is not crazy the old man) new slots in your bar. 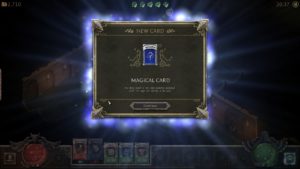 And finally the Fortune teller can reload your cards and upgrade your own with runes. These can be found in the dungeon as well. Be careful, by improving a card, its conditions for equipping it change. It would be silly not to be able to equip it after improving it! 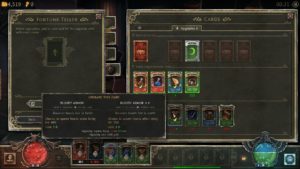 The bestiary within the dungeon is varied. The good part is, you don't find out the hard way. The game saves you from unpleasant surprises by giving you some details about the enemy. You will therefore come across among others: 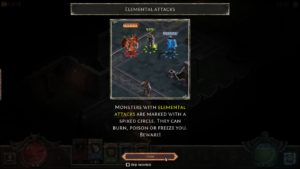 There are still other mechanics, but I'm not going to reveal everything here. Know that the gameplay is very rich filled with small subtleties, without making it complex to smash your head against the keyboard. In addition, the difficulty will increase, so you will have time to get used to it.

And of course, there are bosses! They are distinguished by the fact that they have several stages to pass. The more there are, the more rewards there will be! When moving to the next level, the boss becomes invincible. 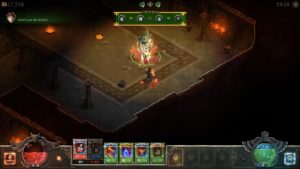 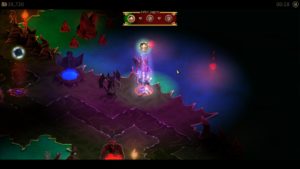 Very educational, Book of Demons guides the player well in order to allow him to appreciate all the mechanisms of the game. But this is not its only quality. Thanks to the "Flexiscope", you can play at your own pace. You can adjust the length of your session. As you play, the precision of the flexiscope gets finer and more reflective of the way you play. If at the beginning the options "Very Small" and "Small" are the only ones available, you will have other choices later. Enough to further refine your playing time. You can also oscillate between two "playing time" if for example 11 is not much and 20 is too much! 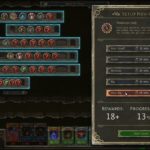 The Flexiscope allows you to choose the duration of your game 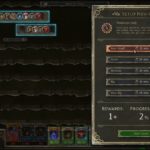 The length of the dungeon adapts to the playing time ... 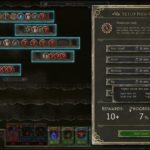 … The same goes for the rewards.

Book of Demons is really fun to play, but it's not perfect nonetheless. Handling is a bit stiff at times. For example ZQSD to move is to be avoided. The character who stops at every crossing is a bad idea.
Watches that cast are not always easy to break. They cast very early, the time to have them just a click away it will be too late. Sometimes the cursor on the incantation bubble is not taken into account. We can therefore quickly find ourselves in a delicate situation, especially if there are, for example, 4 incantations in progress at the 4 corners of the screen.

But despite this, this game is perfect for spending the winter in the warmth on your PC! So if you like Hack & Slash and appreciate a little touch of innovation, Book of Demons will satisfy you. Moreover, thanks to its Flexiscope you will be able to control your playing time. And for those who like to test, a demo is available on the site.

And if you're wondering if your home screen will see other books next to Book of Demons, you've got it! 7 games will be available, each paying homage to a game from the 90s with a different theme and genre, but adapted to the tastes of the day.