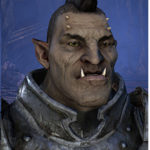 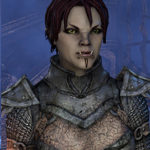 The Orcs have always been considered barbaric and loathsome beings, but endowed with a unwavering courage and unwavering courage in battle. Orc society may seem ruthless to an outsider, but these people are animated by an admirable loyalty, as well as a sense of equality between male and female individuals that many societies could draw inspiration from.

Despite the boorish side we attribute to them, the Orcs are reputed to be outstanding blacksmiths, making poor beautiful and armor impressive and very resistant.

The Orcs, named Orsimer by the Elves, had to flee to the mountain ranges in the Northwest, shortly after the arrival of men in Tamriel, and founded their kingdom there: Orsini about Wrothgar Mountains north of Wayrest.

The Orsimers are the descendants of the elves who, during the Age of Dawn, followed the hero of the pantheon Aldmer Trinimac. But the Daedra Boethiah Trinimac transformed as well as all those who followed him. Trinimac reborn as the Daedra Malacath, and the elves that followed him became the first Orcs.

During the Second Empire, Orsinium acquired the provincial status under the Akaviri potentate, but with the fall of this one, the nation lost this status. By joining the Daggerfall Alliance and High King Emeric, the Orcs of High Wrothgar hope to reclaim this status under their king's rule. vibration d'Orsini.

They suffered for a long time from the attacks on behalf of the Men, who did not consider them other than as pests, comparable to goblins and trolls. They have since hard earned their place as citizens of the Empire, since the Miracle of Peace. 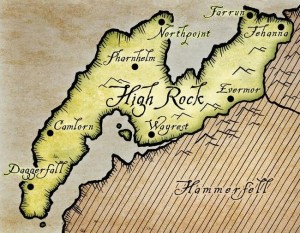 Bretons live in the province of Hauteroche, northwest of Tamriel. It is made up of the regions of:

- Orsini, homeland of the Orcs in the Wrothgar Mountains which separate Hauteroche from east to west.

- theIle de Balfiera, located in the Bay of Illiac, home to the Tour Adamantine and where the Direnni clan retired during the First Era.