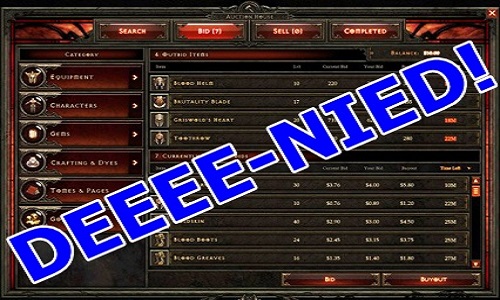 A much-maligned feature of Blizzard's Hack n'Slash, the auction house has caused a lot of ink to flow. After the announcement at gamescom of the Reaper of Souls expansion, Blizzard decides to permanently close the Diablo 3 auction house.

The Californian studio justifies this backtracking as a desire to restore its interest in high-level gaming. Diablo 3 is a Hack n'Slash with attractive "end game" content. This content is "wasted" by an auction house favoring players with a large capital in real money. The auction house was not designed in this sense.

The 'benefits' of the real money auction house

Here are the statements of John Hight, Chief Producer of Diablo 3:

When we originally designed and implemented auction houses, our main goal was to provide a convenient and secure system for trading. But, as we have already mentioned on several occasions, it appeared that it was gradually becoming a diversion of the main game mechanics of Diablo, namely: the discovery of superb objects on the corpses of the monsters, and this despite the benefits of the auction house system for many players around the world. For this reason, we have decided to remove the entire Gold Coin and Real Money Auction House system from the game.

Regarding the implementation of the withdrawal of this feature, he adds:

We believe that its removal, along with the implementation of the Loot 2.0 system jointly developed with Reaper of Souls ™, will provide you with an even more rewarding gaming experience.

We are still working on the details of the terms of the closure, but we wanted to notify you as soon as this decision is made in order to give you as much time as possible to prepare for it. The final closing will therefore take place on March 18, 2014. We will keep you informed as this process progresses.

These statements are followed by an explanatory video by the same Jonh Hight a pair Josh Mosqueira, Diablo 3 Game Director

This announcement aroused strong reactions of joy from the community, even within the ranks of Blizzard!

An FAQ has been put in place regarding the removal of the Diablo 3 Auction House.

How will Blizzard manage to stem the establishment of unofficial alternative means of procuring equipment or money? The question remains open pending further details!

Detroit: Become Human - A little preview of the demo

Add a comment from Diablo III: no auction house