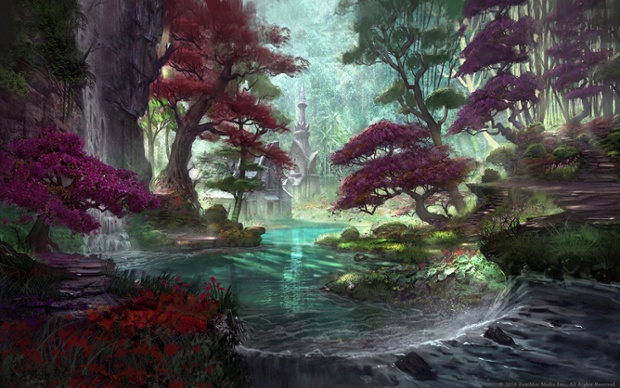 The Guardian had the opportunity to publish twenty exclusive images on The Elder Scrolls Online.

This is a glimpse of Stormhold, an ancient city founded by the Ayleids Barsaebic. You can see what remains of their architecture in the background. Later the city was occupied by the Argonians who built their houses between the collapsed arches. 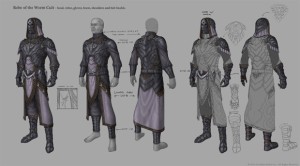 These are patterns for the Wyrm Cult robes. It is a society of necromancers, worshipers of Molag Bal, and evil demons totally devoted to "Planemeld". They sow discord wherever they operate, carrying out foul-smelling rituals, scavenging powerful relics, and raising undead minions to cause chaos. 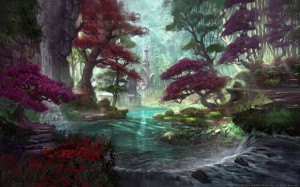 It is a glimpse of Auridon, of Domaine Aldmeri, a mountainous region, with high cliffs, colorful forests and pale sand. Though the High Elves care for their environment, deep forest wilderness and forgotten ruins remain. It is a very old and traditional region. 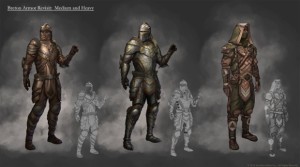 Medium and heavy armor of the Breton style. There have been several versions during development. The Bretons' conception joins the models of traditional fantasy. Centuries of war have led the Bretons to favor efficiency in appearance, their architecture as much as their outfits give an impression of rustic and handmade. 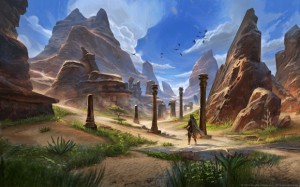 This work shows the south of Bangkorai, a desert of quicksand with small outcrops of hard, flat stones. A few oases dot the desert, almost all of them fortified by Redguard nomads who have made this treacherous land their homes for centuries. 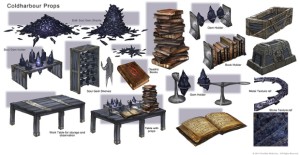 An array of props designed for the realm of Oblivion in Ice Haven, the seat of the main frame of ESO. Molag Bal dominates this shot. 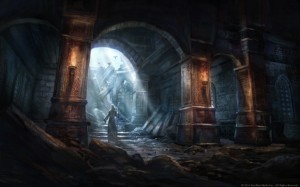 The Breton town of Camlorn is still marked by fighting. We will have to help him to free himself from his bestial conquerors. 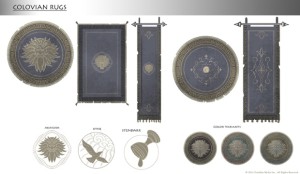 These Colovian rugs can also be hung as tapestries. The Colovians of western Cyrodiil have Nordic ancestors, and this influence is evident in their culture. They are severe and religious. You can see the symbols of Akatosh, Kyne and Stendarr woven into these decorations 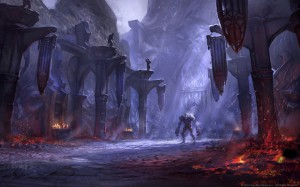 The entrance to the Crypt of Hearts is on the southeast border of Cleave, at the foot of the Wrothgar Mountains. Once a wealthy agrarian enclave, something evil took root there and destroyed the peaceful town of Heartland.

Here you can see part of the modular system designed for Dwarf Ruins, the location of many dungeons. Dwarf architecture is essentially underground, only the entrances are found on the surface. 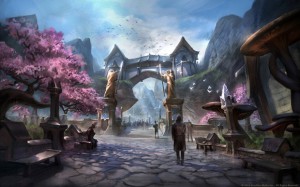 This is a glimpse of Eyevea, a sanctuary for members of the Mages Guild. But today, the idyllic island has been stolen by a mysterious magical force. Can you help the Mages Guild find her?

These are a few tree and rock concepts designed for Estemarche, an icy volcanic tundra. It has a few scattered lakes bordered by snow-capped mountains to the east and west. Pine forests grow in the fertile lands at the foot of the mountains, becoming rarer at higher altitudes, forming a vast frozen desert. 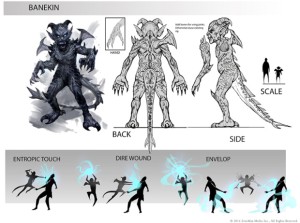 He is a Banekin, a weak servant of the Daedra, who is only effective in his cruelty. They are not masters of their own powers, known to be more destructive than helpful. A summoner can find use for them by letting them cause indiscriminate havoc as they like to. Beyond that, their uses are rare: they are quick to forget orders.

These Daedras, the gatherers, are often used by Molag Bal as supervisors of cult activities. They are frequent participants in rituals involving sacrifices or theft of souls. Even though they have some intelligence, their lack of culture or fluency in languages ​​places them below the Dremora in the Daedric hierarchy.

The titan is an armored giant used by Molag Bal as a guardian of souls and other strategic resources. Half undead, half Daedra, this horrific monstrosity is intelligent and powerful, making it a formidable adversary even for the most skilled adventurers. 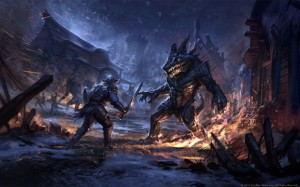 Here we see a battle against a Daedroth, a crocodile-headed Daedra humanoid. Reptilian and massive, simple and brutal, the Daedroth are ferocious savage beasts. Their thick skins are resistant to magical attacks and they are known to vomit fire, further devastating to their already powerful attacks.

Contrary to our practice, I took all the images to deliver the translations to you, but do not hesitate to visit the website of the  Guardian, all the credit goes to them!


Do you want to be up to date and know all the tricks for your video games? In gamesmanagers.com we enjoy playing as much as you do and for that reason we offer you the best tricks, secrets or tips for you to play non-stop. We offer you quality content and always updated to keep you up to date. That's why, in our website, you will find not only videogame guides but also tricks, secrets and thousands of tips so you can play to the limit. Are you ready to get it? Enter now and enjoy your videogame!
caRRage - A mobile racing game ❯