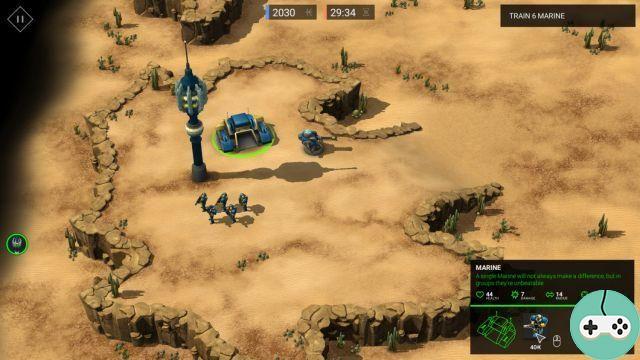 A new RTS has been available for early access since mid-December on Steam. Thanks to a key provided by the developer, I was able to test this strategy game in real time! A little video to get you in the mood.

On August 7, 2077, humans discovered that they were not alone in the universe. A spacecraft came to our solar system, and after passing Jupiter, the aliens landed on the surface of Mars. They settled there and erected huge pyramids, emerging from the Martian sand. Governments have allied to oppose this new threat, but not all of Earth's armies have been able to resist the aliens with overpowered technology. The last survivors have come together under the label of the Earth Liberation Force, made up of scientists, engineers and soldiers. 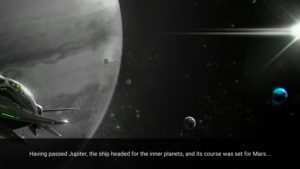 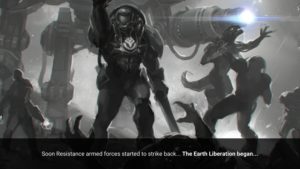 There are currently not many options, only the campaign is offered. It takes the form of missions, with a short text explaining the context and then objectives. 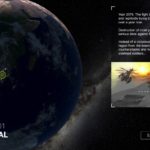 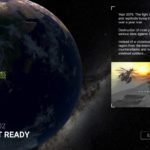 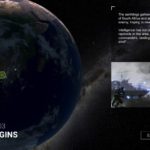 Once in play, the interface is quite similar to known strategy games, in a very simplistic version. There is only one type of resource, a currency that automatically generates over time and is displayed at the top, next to the scrolling time. A few rare crates at the start of the game also give quick points. On the right, the objectives are summarized. When a unit or building is selected, information is displayed at the bottom right, giving the cost of units in base currency and their characteristics.

The buildings are to be created on kinds of ground stakes, the use of which is pre-determined. There are two defense elements (air and ground turret) and two production buildings (to create air or ground units), to be placed on the yellow and blue stakes respectively. There is only one type of air unit, helicopters, having the advantage of mobility, while being able to strike any type of target (ground or air). On the land units side, there are marines (not very resistant but versatile), rocketers (inflict heavy damage on land units but are unable to hit airs) and mortars (useful against buildings). 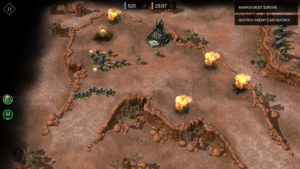 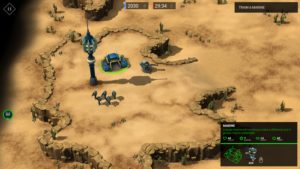 At the beginning, you just have to take your units out for a walk, missions serving as tutorials then, mission 5, suddenly, things get tough and the objectives are more difficult to achieve until mission 7. The objectives are different (attacking the enemy base, protecting a unit against the others, freeing marines from a camp, recovering a container ...) but, in the end, the principle remains similar throughout: survive. The enemies are just tougher and more numerous, and the defenses more effective, mixing anti-ground and anti-aircraft turrets. 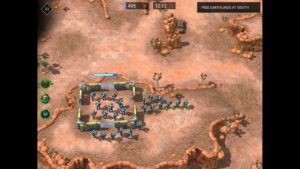 The key to securing victory is the survival of your base. It is therefore first necessary to gauge the enemy's power and ensure a good defense of his camp by placing the right turrets. Overall the computer is dumb, it attacks in a loop always using the same pattern, so you just have to observe a little, possibly die once, to know where the shuttlecocks are coming from and where the big waves are coming from.

On the other hand, it is impossible to overload the map with defense elements insofar as the buildings can only be placed on the stakes, the yellow ones in this case for the defenses. You must therefore be thoughtful in your decisions (especially since the turrets can only be replaced once destroyed, so if you find yourself under a big air attack with only turrets on the ground, nothing to do). 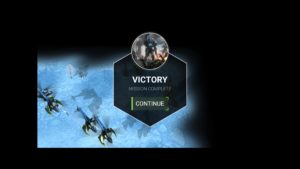 Once the base is more or less secure, usually with two turrets of each type, a good row of marines (inexpensive and efficient in number) and two helicopters in protection, it is time to attack. Here you have to pay attention to the types of turrets and move carefully along the edges to destroy the anti-ground with the helicopters and the anti-air with the mortars. The enemy does not know how to rebuild their buildings, so there is no reason to rush, each destroyed tower will definitely be destroyed anyway. To accelerate victory, regardless of the objective, it is preferable to target the generators of enemy units (no fog of war, therefore easily identifiable). As soon as these generators are destroyed, it is then possible to unleash all of your strength on the objectives, without any need to take care of your base. You also have to be very careful with the red units: if they die, the mission is a failure. To help with their survival, their life is displayed on the left (flashing if they are ever in danger of death). 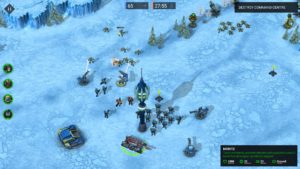 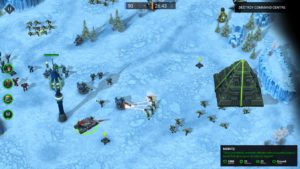 Earth Liberation is promising, but limited in its current form. There is no difficulty management and the progression is not linear, mission 5 is really too difficult compared to 4, which can lead to being a little disgusted. And the 7 is really the hardest (I must admit that I have not yet succeeded). The worst part is that once things have been properly analyzed in a mission and the waves memorized, everything turns out to be rather simple, mechanical, logical. There is no real surprise and little diversity in the possibilities. You just have to put the right units in the right place. I'm not particularly convinced at the moment, there are still quite a few small options to add, units to create, and modes to offer, so that Earth Liberation is a viable alternative in the RTS market. In the meantime, it remains a nice little entertainment, at a mini price, which will occupy you a few hours and which you will certainly put away while waiting for future updates.