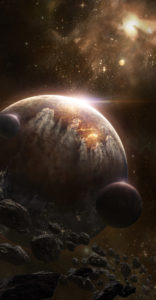 The best way to sum up the stellar traveler's guide to Tiber would be to say: don't go. Or rather, DON'T GO! The scene of countless battles between humans and monsters, Tiber is a gaping wound that disfigures the explored galaxy and shows no sign of healing.

Tiber was first mapped in 2474 by long-range explorers of the UEE, and was immediately classified as one of the uninteresting star systems. Tiber was a standard orange dwarf around which two planets revolved, and harbored no interesting resources, strategic connections via jump points, or anything that might have aroused the lust of terraformers or other promoters.

When the UEE was unable to hold Orion, its forces fell back on Caliban and Tiber. In view of the obvious advantages offered by Caliban, the bulk of these forces were stationed there rather than in Tiber. Under these conditions, no one should have been surprised to see the Vanduul seize a nearly defenseless Tiber system and turn it into a base from which they could launch new attacks into human territory. Vanduul tribes entered the system and established the equivalent of a permanent garrison.

When the shock of the Vanduul attacks revealed Tiber's role, the UEE sent its Sixth Battle Group, an elite corps, on a cleanup mission. Armed with antimatter bombs, the fleet vitrified the Vanduul encampments on Tiber II with impunity, momentarily turning the surface into a glowing slurry. The response was immediate, relentless, and represented the most organized action ever seen by the Vanduul: elite Vanduul squadrons operating from ship carriers, the cream of the crop, swooped in surprise on the forces of UEE and massacred them to the last soldier.
Only a distant observer, stationed near the jump point towards Garron, managed to escape to witness the disaster. Thus was born the Chopper, point of crystallization of a multi-generational war between humanity and the Vanduul. Subsequently, no less than nineteen major initiatives were taken to drive the Vanduul out of Tiber.

Huge fleet actions, large-scale landing attempts directly on Tiber II, and even “clean slate” operations simply aimed at eliminating the system's ability to accommodate occupying troops, all were tried to waste. These failures resulted in millions of deaths, and the ever-expanding wreckage fields are now legendary. Countless civilians have also suffered a disastrous fate on the same journey, after considering the debris of the terrible battlefield as so many sources of profit.

Today, the battle continues unabated. In addition to regular reconnaissance missions (some of which are sometimes more muscular), the system is visited each year by thousands of commanders of private vessels. Whether they try to prove themselves by facing a Scythian in a hunter duel, or to take advantage of the system's resources, their fate is almost always the same: minced… by the Chopper.

The only time one might consider "safe" to visit Tiber is, paradoxically, during a major battle. With the EAEU supply chains stretched to their limits across the galaxy, the military are often interested in supporting civilians in their combat operations. Supply vessels carrying medical supplies and other necessities are generally well protected, as long as they are kept away from the front itself. Obviously, it can be tricky to determine where exactly the forehead is located.

Tiber I is a small, dense planet close to the Sun of the Tiber system. Its CO2-rich atmosphere is breathable, but even disregarding the incessant fighting, the extreme heat generated by the proximity of the sun alone would be enough to make life unbearable. Although no extensive studies have been conducted, all of the available data tends to indicate that there is nothing of interest about Tiber I, and it's hard to imagine anything that would justify sending a human to find out more, with the risks and costs involved. Tiber I's orbit is nestled within a particularly dense asteroid belt, further complicating exploration.

Other than that, the asteroid belt is nothing out of the ordinary, with fairly low concentrations of precious minerals. It is made up of small asteroids that move at high speed, and is devoid of planetoids of significant size that can be converted into secret bases (the intelligence services of the UEE, which would so much like to have a listening station closer to the Tomb, know this all too well).

The UEE's long-range imaging stations have recorded unusual climatic movements on the surface of Tiber I, which meteorologists believe could offer improved conditions once every four years.

The average lull typically lasts three days, during which remote imagery seems to suggest that the atmosphere itself is clearing, and that CO2 is concentrating around the polar regions of the planet. Due to the proximity of Vanduul fighter squadrons, it proved impossible to verify this hypothesis.

The Tomb is a barren, deserted world covered in a layer of blood-red copper dust, which embodies the Vanduul war machine's fierce appetite better than any. Much of the planet's surface is covered with wreckage of ships and ancient war machines. The remnants of countless repulsed attacks by the UEE, private initiatives to take advantage of this unusual system, and destroyed Vanduul technology pile up in successive layers on the planet.

The Tomb is not, however, a definitive cemetery: the wrecks that accumulate there are then devoured by huge Vanduul harvesters. These mechanical beasts ingest all kinds of materials and convert them to power the Vanduul war machine. The reapers that are on Tiber also fulfill another even more terrifying role: they appear to be the source of new reapers that have been dropped on human settlements during some raids. In fact, these "mother reapers", apparently identical to other reapers that have been observed elsewhere, are duplicating themselves to spread terror throughout the galaxy. Everything, from the wrecks of starships to the bones of fallen soldiers, therefore contributes to feeding the enemy they had just come to fight.

This world is also home to a large number of Vanduul cantonments, Spartan base camps for the use of Vanduul forces who constantly move through the system. While humans wouldn't risk finding the Tomb's environment very hospitable, the Vanduul seem to thrive in this climate, and pay no attention to the landscape of wrecked ships around them (no one has ever seen the Vanduul show the less desire to seize a foreign technology). It would be suicidal for a human to attempt to visit one of these camps, but public reports that track past attempts to disembark the Marines have revealed much more about their usual arrangement.

Although the Tomb can be an attractive target for salvage teams, keep in mind that to this day, no one is known to have managed to land on the planet to retrieve some of the military equipment. priceless that is there. Travelers are strongly advised not to risk it. The UEE never managed to establish a viable landing zone on the Tomb, and unless you are part of an unlucky Marine detachment, there is little chance that you will even make it to the surface.