Imperials, also known as Cyrodiilians, are the native humans of the central region of Tamriel, Cyrodiil. Descended from the indigenous humans of Tamriel, the Nedics, they were once the slaves of the Ayleids, the elves who had conquered Tamriel and imposed their empire.

Imperials have a fair complexion and resemble the Nordics, only smaller or towering. They have no alliance of predilection and will join any alliance in order to reconquer Cyrodiil fallen to the hands of Mannimarco and his henchmen.

The Imperials revere the Eight Divines, they are specialized in the shield fight and have a large resistance and endurance.

Formerly the Imperials were the slaves of Ayléides, until Alessia, chosen by Akatosh, rises and overthrows the Elven Empire to install the First Human Empire there instead, in Cyrodiil. Since then, the Tamriel empire has been ruled by Cyrodiilians who call themselves "Imperials".

The previous line of emperors, the dynasty Reman was of imperial origin, some from the western region of Colovie.

Tradition has it that only a mixed blood descendant of Alessia and Akatosh (a Dragonborn) can sit on the ruby ​​throne and don the Emperor's Amulet, ensuring Nirn's protection against Daedric invasions.

The last contenders for the title of emperor were Leovic, who was dethroned by Varen Aquilarios, son of a Duke Colovien, but the latter having no dragon's blood in his veins, his reign was not legitimate ... 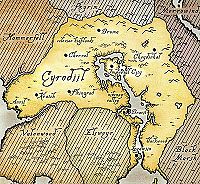 The Imperials live in the province of Cyrodiil, but for the Imperial players, their new homeland will be the one of their choice within each alliance.

This province is the seat of the empire in Tamriel, and the emperor is believed to have reigned since imperial city right in the center of the map. In TESO, the western region of the Colovie, as well as the region of Boinoir and the Topal bath are not present at launch.

The cities present in Cyrodiil are Chorrol West, Fog North, Cheydinhal to North-east, Gué-les-Champs to the east, and Vlastarus at the South West.