At the beginning of February, Matt Firor brings us some information on the future of the game.

Two new loyalty rewards will be emerging ahead of the release of Tamriel Unlimited. The first reward will be offered for a nine-month subscription: the Mask of the Merry Slaughter, a unique disguise in honor of Sheogorath, the wacky prince Daedra that we love to hate. 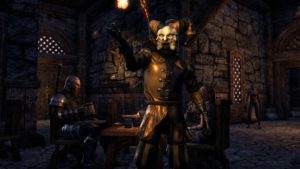 The second reward will be for players on Teso since its inception: a magnificent mount Striped Senche (a distant cousin of the khajiit!) 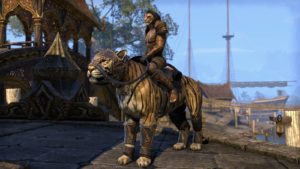 To be eligible for this mount, you have two options:

Philosophy of the crown shop

With the change in the economic model, a store is appearing in-game as well as a brand new virtual currency, the Crown. One very important thing that Matt Firor would like to make clear is that the addition of the store will not alter the base game in any way. The game, level progression, experience, etc. will remain identical to what is before the change in the economic model.

The shop will sell items from convenience and customization. That is to say mainly items to improve the appearance of the character and / or distinguish him from others, or even save time. For example, Health, Stamina, and Magic potions will be purchasable for Crowns. Although they will be similar to those purchased from Non-Player Characters, they will still be weaker than those that players have crafted. 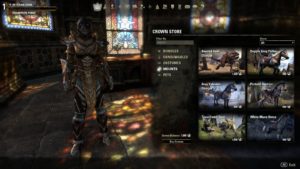 Matt Firor is aware that some players are expressing concerns about the types of items that may appear in the Crown Store. He wants to reassure everyone about the philosophy of the store, it will not change. That being said, experience potions will be offered, as these fall under the "shortcut" category. However, the team is currently in discussions to offer the Convenience Items for gold from the in-game merchants.

The Eso Plus subscription is the easiest way to fully enjoy the game. The subscription will allow you to obtain level gain bonus (character experience, craft inspiration, etc.) to have 1 crowns every month and access to all game packs (DLC) for the duration of the membership. Players who currently have a subscription will automatically be ESO Plus members when Tamriel Unlimited is released.

The announced release date is still currently June 9, 2015. Matt Firor discusses the reason for the length of the development. The answer is simple: the console versions are NOT ports of the PC version. 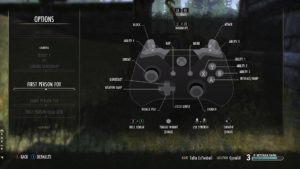 The console version will benefit from some additions compared to the PC version in order to improve the gaming experience. Voice chat has indeed been integrated and the interface has been completely redesigned.

The transfer of the console version will indeed be available. When the latter is released, an email with all the details will be sent to all players and, despite the fact that no date has yet been set, the transfer will be possible before the console release. During the transfer, all characters, with equipment, inventory and all items stored in the bank will be transferred to the chosen platform.

add a comment of ESO - What to expect - February