Le Trépas des Cognées is an area south of Khefrem. Discovered by Prince Hubalajad while he wanted to civilize the southern region, he was unpleasantly surprised when he discovered an arid peninsula, hostile to all life.

The Trépas des Cognées is a rocky area, where the stifling heat, brackish water and land unsuitable for agriculture are the only things to be found there. Despite his efforts to make the area habitable, Prince Hubalajad, who was nicknamed the "Prince of Hogwarts", failed to tame this wild land. Bearing the name of “Botte de Khefrem” for many years, the region was finally renamed “Trépas des Cognées”. 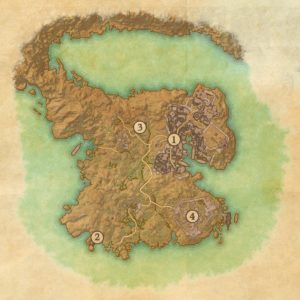 All travelers will disembark at Abah Landing. Be careful, however, you will have to keep an eye on your purse, because pickpockets and robbers of all kinds are legion in this port city. Abah Landing is the home of the Thieves Guild.

This port has existed since the arrival of the Prince des Cognées. Formerly a shanty town used for the construction of the citadel No Shira, the latter has become a city in its own right through which circulate the Abecean riches.

The secret of the city's wealth rests on a secret agreement made centuries ago between the city's powerful merchant lords and the pirates sailing the Abecean Sea. This treaty requires that any booty arriving at Abah's landing stage be purchased without question. This very lucrative treaty allowed the city of this developer beyond its possibilities. The backlash of this overdevelopment is that the city cannot feed all its inhabitants and requires a constant external flow of food to survive.

Despite the immense wealth held by the merchant lords, none attempted to take possession of Hubalajad Palace. Rumor has it that anyone who takes possession of this palace would become as unlucky as the Prince of Hogwarts himself. 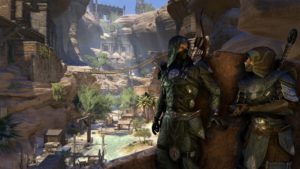 The Shark's Teeth Cave is considered the one and only place to hide for those wishing to escape the grip of the merchant lords. Being very regularly flooded, the residents built their houses high up, on the walls.

At its center is an unfinished temple. Nobody knows who started the construction of the latter, but rumors claim that it is one of the follies of the Prince of Hogwarts. The cave has no fixed leader, the latter constantly changing as soon as new "tenants" decide and manage to drive out the previous ones.

The Shark's Teeth bandit group has been occupying the cave for about a year now. 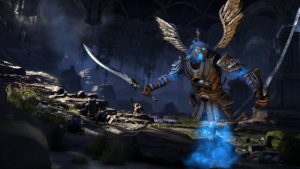 The heart of the Trépas des Cognées houses the sealed tomb in which Magnifico Bahraha lies within it. The latter is the half-uncle of Prince des Cognées, who deceived his nephew by having him build a refined family tomb. Bahraha, as well as a sect of necromancers, carried out a dark trade on the poor wretches of the landing stage of Abah.

When Bahraha's misdeeds came to light, the Prince of Hogwarts decreed that his uncle should be walled up alive in the tomb. He, along with his followers, was imprisoned with some food and water, and then the Yokudan priests sealed the tomb. Even today, the seals are still intact. 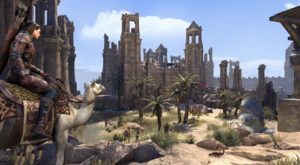 Prince Hubalajad's first directive to bring the Yokudan civilization south of Khefrem involved the construction of a fort overlooking the Abecean Sea. From the latter, powerful siege engines could defend the port of Abah's landing stage from enemy ships.

Unfortunately for the Prince des Cognées, the constant floods as well as the mediocre foundations have damaged the walls of the buildings. During the two millennia which followed the abandonment of the fort, the citadel served as temporary shelter in turn for bandits, imperial legions and even a traveling circus.

What do you think of this new area?