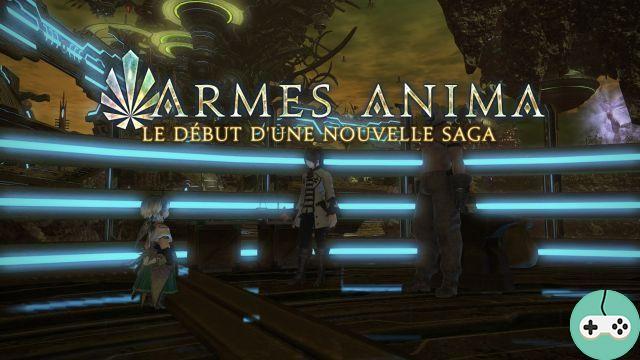 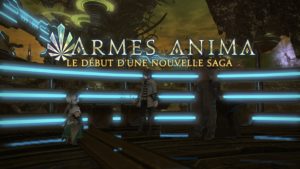 As for the previous relic, the Anima weapon has several levels and it is possible to evolve it with a few (big) efforts and new quests will be added to the thread is updated.

It is only possible to complete one relic quest at a time and each quest is linked to the job you took it with. Be careful that you are in the job you wish to obtain the relic with before taking the quest! 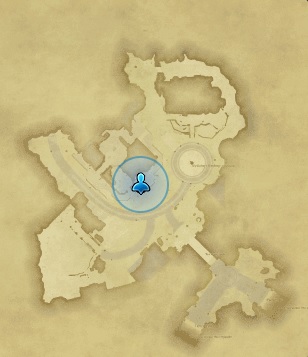 The first stage of the relic can be resolved in different ways. The quick way and the long way. 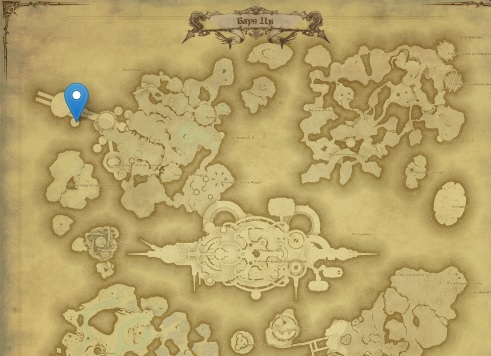 The quest will require you to obtain and bring back two crystals in order to attach the soul to your weapon.

As previously said, it is possible to achieve this quest in two ways.

This solution allows you to complete the quest in a few quick clicks and less than 2 minutes. During the quest, you will be asked to visit an NPC in order to get information on the crystals.

The latter is located on the terrace, on the first floor of the building located to the north. 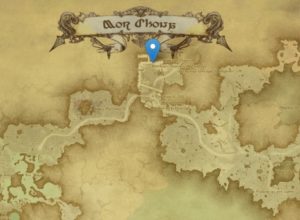 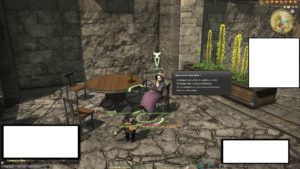 This solution may be heartbreaking, as you will be asked to sacrifice your Zeta Zodiac Relic. (the relic of A Realm Reborn at the final stage) In exchange for the latter, Syndony will be able to extract what to obtain the umbral crystal et astral directly.

Be careful, you will permanently lose your Zeta Zodiac Relic and no turning back is possible.

In addition, it is possible to use the relic from any job. It is therefore not necessary, for example, to use a Zodiac Zeta Paladin relic if you are making the Anima relic for White Mage.

The long method is the method allowing you to keep your Zodiac Zeta relic or to do if you do not have it. To obtain the Astral and Umbral Crystal, you will be asked to reunite several elemental crystals.

These are obtained by realizing hazards of certain areas. For this, you will need to get the gold medal on them. The drop rate is, unfortunately, not 100%. Depending on your luck, it can take a long time to get all the crystals! The good news is that you can hit random with any class or job and at any level.

The areas where crystals are obtained are as follows:

Once you have gathered all the crystals, return to Syndony to crystallize them and obtain the Astral and Umbral Crystal.

With these two crystals, return to Ardashir in Azys Lla to obtain your Animated Weapon ilvl 170!

This step is very quick and easy. It is possible to achieve the latter in one or two evenings, even in a relaxed way.

As for the previous quest, you will have to be in the job you want to get the relic.

The latter will ask you to complete several dungeons in a certain order. Several points should be known:

The dungeons are divided into several stages, once a stage is finished, you will find yourself outside the last dungeon and you will have to speak to Ardashir in order to unlock the sequel.

Once completed, you will find yourself at the entrance to Qarn, at the Southern Thanalan. Chat with Ardashir to unlock the second step. 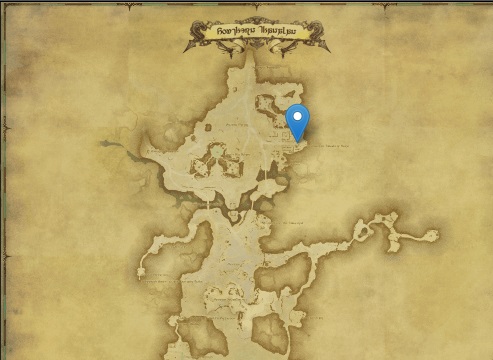 Once completed, you will find yourself at the entrance to Amdapor Castle, in the southern forest. Chat with Ardashir to unlock the third and final step. 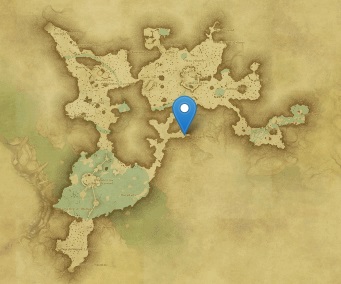 Once completed, you will find yourself in the hoplon square, at Ishgard - The Foothills.

Chat with Ardashir, then return to see him at Azys Lla in order to complete the quest and get your Awakened weapon of an ilvl 200!

Be careful, to complete this quest, you will need to unequip your animated weapon, but you must however be in the relic job. Remember to equip a weapon from your job (or buy one in town, for a few gills) before going to Azyz Lla!

This stage is arguably the longest and most painful at the moment and will keep you going for several weeks.

This quest will require you to collect four items.

To obtain these items, you will need to visit Cristiana, at the death knell. (X: 21 Y; 5) The latter is located in the recess at the bottom of the stairs giving access to the first floor and to the terrace. 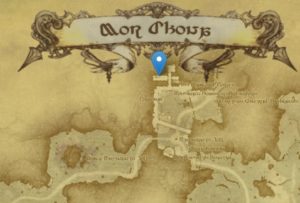 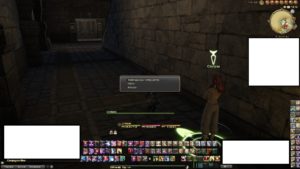 Each of these items requires obtaining multiple other items in order to be purchased, and this is where the longest part of obtaining (right now) begins. There are several ways to get these and luckily you can vary the methods of obtaining them. The prices displayed in the tables are for a single copy.

Table listing all the components to be recovered when realizing the content of the game, necessary for the creation of the Anima relic of Final Fantasy XIV.

In addition to that, you will need several made-up objects, of High Quality, made by craftsmen:

Table listing all the components to be collected via crafting, necessary for the creation of the Anima relic of Final Fantasy XIV.

Once you have collected all the items, you can exchange them with Cristiana in Mor Dhona for the four items Gerolt requested.

Return to Gerolt in Azys Lla to give him the items and get your Arma anima of an ilvl of 210.

The latter is relatively easy and quick compared to the previous step.

To perform the latter, you will be asked to obtain:

To obtain these, you have several means that you can obviously combine:

Once the 5 insulating oils, go back to Gerolt in Azys Lla to get your Hyperconductive weapon of an ilvl of 230!

With update 3.3, a new level of the relic is born and a new (long) series of farming is to be done.

Similar to the "Alexandrite" stage of the Zodiac Relic, the "Blossoming" stage allows players to choose which stats to build for the weapon.

Attention, once taken, this quest cannot be abandoned. If you have multiple Relics, make sure you've chosen the correct one and that you want to complete the quest for that last one, as you won't be able to change until you've completed the quest in question. !

This quest has two stages:

To obtain these two components, several methods are available. The hard Umbrella Rock is very easy to collect. Crystal sand is another story!

Table listing all the means to recover Crystal Sand, necessary for the Anima relic (240) of Final Fantasy XIV.

Once in possession of a crystal sand and a hard umbrella rock, you can go to Ulan and select the option "Help the mind to flourish" in order to exchange the two components thus allowing to obtain several Sands of refined crystal. If you are lucky you will get 6 Refined Crystal Sands, if you are not you will only get 3, 4 or 5.

Thanks to the sand, you can choose which stats to mount on your weapons. 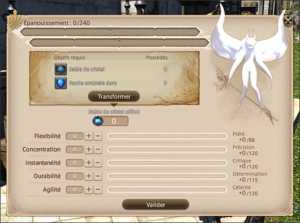 However, some information should be known:

Once the 240 points have been distributed, you finally have your blooming anima relic which has an ilvl 240!

This step appeared with update 3.45. The latter makes it possible to pass the weapon to the ilvl 260. This step can be carried out in different ways, but, in general, it is extremely quick to carry out. If you've saved up enough, you can even finish it just a few evenings.

As for the previous stages, if you have several relics, you must take the quest with the one you want to evolve. Once the quest has been retrieved, you will have to go to Blamprest, in Idyllea, who will ask you:

To do this, you have two methods of obtaining that you can combine:

When you have collected all 50 Resonant Aggregates, simply return to Blamprest so he can exchange them for “Resounding Essence” and “Bottom Still” Brandy.

Once you have these two items in your possession, return to Ardashir in Azys Lla to obtain your new one. quickened weapon of an ilvl of 260.

This is the last stage right now (3,5 - part one) and will remind you of the Nexus stage of the Zodiac Relic. Prepare to farm dungeons / raids / primordial to collect "lights"!

This quest has several stages. The first step will first ask you to complete three dungeons in order to collect items, with the only condition of having your revived relic (260) equipped.

Items are collected automatically, so you don't risk missing them.

Once the item rights have been recovered, you will need to go back to talk to Gerolt at Azys Lla. Once the latter has been validated, two new quests will be granted to you from Ardashir.

The first is: "Crafting a New Soul Stone", a fairly simple quest that will require you to bring 15 Dark Aggregates back to him. There are three ways to get them back:

Of course, it is quite possible to mix the three methods and buy Dark Aggregates from all three merchants.

And the second quest is "The Last Transfer", the one that will ask you to farm over and over and over again ... This is the very last quest to complete this step. By taking the quest, you will receive an "improved anima scope" which will be used to track your progress. And forward the farm to increase the degree of condensation of the soul of the synthetic spirit of your weapon. There are, however, only in certain instances where this is possible, namely:

Just like in the days of the Zodiac Relic, every hour some of them will grant a bonus. There are Reddit feeds to know these time slots, for example this one.

Once your condensation reaches 2, you can return to Azys Lla to validate everything and get your condensed relic of an ilvl 000 but also a mascot, Synthetic Spirit!

This is the very last stage of the Anima relic. This allows you to upgrade your Anima weapon to ilvl 275. This step has two quests to complete:

Once validated, talk to Ardashir in order to obtain the second quest:

This quest is divided into two parts and several stages.

The first will require you to complete numerous challenges while having your Relic equipped. The challenges are offered in more stages, stages which will evolve automatically as soon as the list of challenges in question is validated. The order of the challenges and the different stages are as follows:

Once all these challenges have been completed, all you have to do is buy an item, an “ancient enchanted ink”. You have two possible obtaining methods:

Once you've completed all the challenges and have the Ancient Enchanted Ink, all you need to do is go back and see Ardashir in order to complete the quest and get your Weapons Anima Lux possessing a ilvl of 275! (PS: don't forget, like the previous steps, to unequip your Relic before speaking to it.)