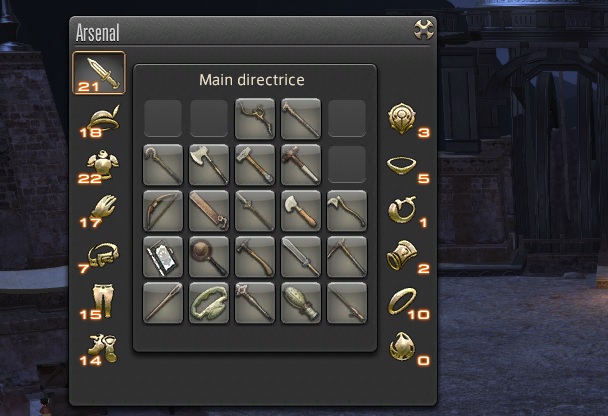 The head of the interface team, Hiroshi Minagawa, posted a second post on the official forum regarding the game's inventory. This one explains that the items are displayed in our bags as icons for memory and screen space concerns, and that his team is currently working on a text display method.

Why are inventory items only displayed as icons?

We made the items in your inventory display as icons for two reasons.

It is for these reasons that we have opted for an icon display method in certain object windows. We have a textual display method planned, but the implementation period for this has not yet been decided.
For those of you who are not happy with this decision based on this short explanation, I invite you to read the detailed explanation below!

Very often, you will be required to open your inventory or arsenal window at the same time as shop, character, trade, or any other type of window.

If the game runs in its minimum resolution (1280x720), even if we decided to replace the object icons with displayed text as small as possible, the lines of text would still occupy large columns.

If we displayed a small icon on the left, the text corresponding to the name of the object, and additional information like the quantity of objects per slot, the window width should be 1,5 times larger than the window of current inventory.

Regarding the equipment confirmation window, in the Japanese version there is indeed some space that can be removed from the right side, but this is due to the fact that the object names are much longer in spanish and German.

* By the way, the longest object name in the game is over 60 characters long.

In the event that the names are too long, we have received comments suggesting truncating them using ellipses. But for languages ​​other than Japanese, the end of the name often indicates rank or special characteristics and if we decided to truncate them, the lists would have many identical object names.

In addition, the biggest obstacle is that of the necessary memory. For the interface, bitmap images are used for both icons and text which are loaded by memory resources, but the elements to load in order to display a single object are much less using an icon than displaying one line of text.

Unlike a standard offline RPG, it is necessary in an MMO to have the proper structure to allow multiple windows to be displayed anywhere and at any time. If the management of memory resources and images is not more restricted than in an offline RPG, it causes slowdowns and malfunctions.

The resources that can be used when designing games to avoid the display of menus during combat, for example, are very different.

* If you are interested, try pressing b, c, p, j, m, i, u, y, h, and k keys consecutively in PC version to open multiple windows. The system will be put to the test more and more, but at the same time, hardly any other RPG allows such a display for windows. Being able to do so, for example in a fight against a Primordial, is a unique characteristic of an MMO.

Taking a holistic approach to the circumstances and limitations facing us, we decided that the best decision was to display inventory and arsenal items using icons. That being said, although it is difficult to perform for the PS3 version, it is possible to adopt a separate text display method for the PC version.


If we decide to display only 10 icons with text, we would be able to separate the tabs by categories and then we could make that possible for the PS3 version as well.

We are currently in the midst of overload testing for the last most important elements of the interface that are constantly displayed on the screen, namely the Alliances. Once this is finalized, we can start to look at the display variations and customization of the existing options. Until then, I apologize for the inconvenience and thank you for your understanding.

Interesting isn't all these technical explanations!

MMOs have accustomed us to this icon-based inventory system. Do you think that an inventory in the form of a textual list is necessary?