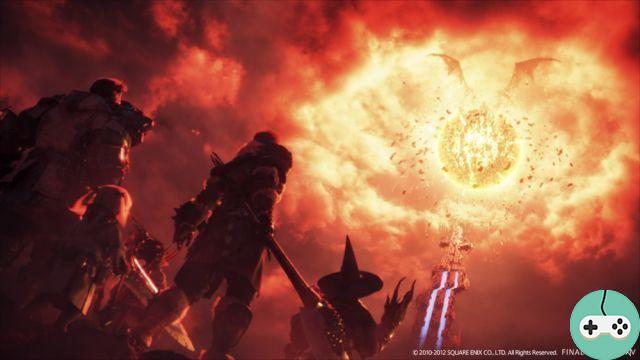 The first anniversary festivities come to an end and here is the fifth and final tale that will delight history buffs. Good reading !

The boat was slowly pulling away from the bay, gaining speed as its vast white sails billowed in the brisk coastal wind. At the end of the quay, accompanied by their father, Alphinaud and Alisaie attended the departure of the ship aboard which was Louisoix Leveilleur, their esteemed grandfather.
"He's gone," Alphinaud whispered weakly, his eyes riveted on the fleeing silhouette of the boat. Alisaie did cast a glance in the direction of her brother, but she was silent. Her eyes were still red with tears.
Each of the twins had welcomed the news of their grandfather's departure in their own way. While one had shown an impassive calm, the other had spread in tears and cries. Despite this, watching them stand side by side on the dock, each embracing their grimoire as if their lives depended on it, it would have been difficult to distinguish them.
They weren't as different as they wanted to believe ... 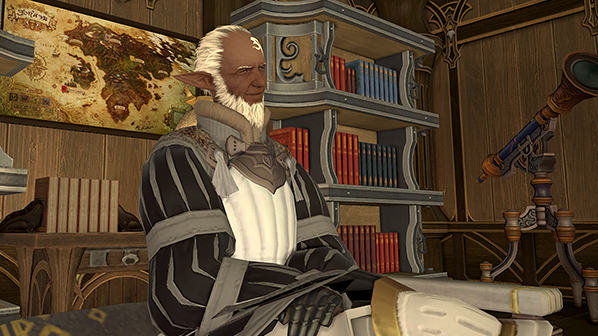 “Even if you had not been admitted to the Academy of Magical Arts - for which I am nevertheless very proud of you - these presents would have been yours. Here, there is one for each of you. Read together, these grimoires form one and the same tome. As long as you support each other in your studies, the lessons they contain will hold no secrets for you. The two books that Louisoix had given to his grandchildren just hours before his departure were curious to say the least. Written in such a way that their content could not be deciphered one without the other, they let shine the malicious humor which the eminent sage of Sharlayan sometimes knew how to display behind his usual solemn airs.
“Thank you, grandfather. Alphinaud accepted his grimoire with grace and dignity. At the same time, Alisaie received hers distractedly, before immediately resuming her business of dissuading Louisoix from going to sea.
"Do you really have to go, Grandpa?" Is there nothing we can do to hold you back?
- Come, my child, we have already said enough about this. "
A month had passed since the twins had learned that Louisoix was going to leave Sharlayan for the shores of Eorzea. He had then patiently explained to them his plan, which was to come to the aid of the inhabitants of this remote land to anticipate the disastrous advent of the 7th Umbral Era.
Aware of his grandfather's firmness in his resolution, Alphinaud had chosen to hide his melancholy and remain silent, unlike Alisaie and Fourchenault, their father. As young Élézenne tried to oppose her grandfather's trip in the name of her love and admiration for him, Fourchenault's objections were more of a political nature. Louisoix's eldest son was an influential member of the Forum, the assembly of philosophers in charge of leading Sharlayan, and like the majority of his colleagues, fiercely opposed to any military intervention. In his mind, the primary vocation of the Sharlayanais was to chronicle the events occurring in Hydaelyn, not to get involved.
When the hordes of Garlemald's empire swept over Ala Mhigo, one of Eorzea's six city-states, it was Fourchenault and his companions who attempted to initiate peace talks. After the failed negotiations, they realized that they had no choice but to abandon their own colony before it was in turn invaded by the Imperials. After five years of painful and tedious preparations, their plan to return to the northern archipelago they came from was finally put into action.
In the year 1562 of the 6th Astral Era, the City of Sharlayan - a center of Eorzean scholarship, located in the Dravania Lowlands - turned into a ghost town in the space of a single night. Despite being aware of having taken part in this brutal exodus, the twins had no recollection of the episode, as they were still infants at the time.
"Father, only savages resort to war" affirmed Fourchenault, continuing his daughter's plea. “It is a practice that the wise abhor. As Sharlayanais, it is our duty to observe and archive the course of history, but in no case to seek to modify it. Our civilization will not progress through futile conflicts but by passing our knowledge on to future generations. "
"I have already told you that you will not make me change my mind, Fourchenault" replied Louisoix, visibly weary. They had had the same conversation, almost word for word, at least a dozen times in as many days. “Ignoring the cry for help from these people is not wisdom, it is indifference. And I fear that this kind of passive attitude will hardly make us move forward on the path of progress ... I fully understand that you want to spare these children from the horrors of war, that's why I'm not forcing you to return in Eorzea by my side. Life forces us to make choices, but we also need to protect what is dear to us. The two interlocutors refusing any compromise, the discussion ends in the same way as usual.
Alphinaud and Alisaie were endowed with an exceptional intelligence for children. They were so far ahead in their studies of ether theory and other esoteric fields that they both passed the Academy of Magical Arts entrance exam by the age of eleven.
This is why Alphinaud, although understanding the logic of his father's argument, was aware that Louisoix's case was right. The boy remained silent not out of stoicism, but because he knew his inexperience would only hamper his grandfather's will.
Although as quick-witted as her brother, Alisaie did not show the same maturity and gave free rein to her discontent, internally insulting Alphinaud for his silence and his resignation before their grandfather's decision. How can he stay like that without saying anything !?
A small but nevertheless obvious discord had arisen between the twins.

The fatal day arrived long after Louisoix set sail and disappeared behind the horizon. Alphinaud and Alisaie were in the observatory of the Académie des arts magiques with their teachers and a host of other students. All were gathered around the base of the giant telescope, waiting their turn to admire the menacing spectacle of the red moon, Dalamud.
“Dalamud is breaking! Cried Alisaie suddenly, forcing her face against the telescope eyecup so as not to miss a thing of the scene. The vision offered by all of the device's magnifying glasses was distorted and blurry, but the star's fate was in no doubt - she could see its crimson figure crumble above Carteneau.
“What !? Does it break even before it hits the ground?
- It's impossible ! "
Excited murmurs and hastily worked out theories arose among the students and teachers.
“It's grandfather! He saved Eorzea! Alisaie, her eyes filled with tears of joy and relief, turned to find her brother's face in the crowd. For several moons, the sage Urianger had regularly sent news of Louisoix's activities to the two twins. It was he who had informed them of the presence of their grandfather in the plain of Carteneau, and of the progress of the battle which was still raging there despite the imminent catastrophe.
Pushing his sister aside in the height of excitement, Alphinaud looked in turn through the lens. Although the air was hazy with countless clouds of smoke and ash, he immediately understood that Alisaie had been telling the truth. Dalamud was no more.
There is something wrong ... Alphinaud continued to scrutinize the scene. The glowing aura of the star had given way to an incandescent rain no less disturbing, as if tears of light were falling from the heavens. I have a bad feeling...

Dalamud's spectacular agony caused a powerful surge of ethereal energy that rendered all linkshells useless for several days. During this time, the Leveilleur twins spent most of their time going over events in their minds to try to understand what had happened. Then, after several weeks of no news, a letter from Urianger arrived.
The sage's elegant calligraphy described abominations that the twins refused to imagine. From the cracked envelope of the star had emerged an ancient dragon whose immensity was beyond comprehension, an incarnation of rage and flames that had ravaged the land several dozen malms around. Without ever losing courage, Louisoix had persisted in his plan to invoke the power of the Twelve. With this divine support, he succeeded in banishing the creature and thus saving Eorzia.
However, when the twins came to the conclusion of Urianger's astounding tale, the faint glimmer of hope they still harbored had finally died down.
On the devastated plain of Carteneau, my venerable mentor - your beloved grandfather - then became light and went on his last journey.
Alphinaud's trembling shoulders betrayed his contained sorrow, while Alisaie screamed all her pain loud and clear, without caring who could hear her. 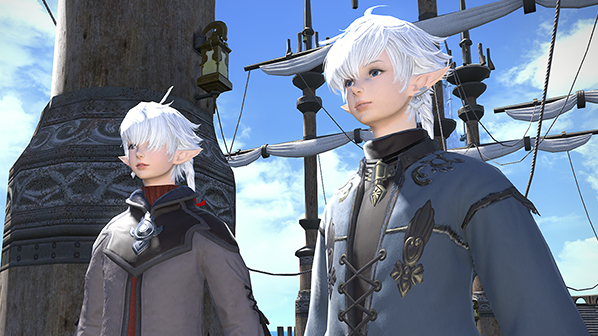 Five years later, another boat left the bay. Alphinaud and Alisaie were standing on the gently swaying bridge, scrutinizing their father's silhouette, which was gradually diminishing.
Freshly graduated from the Academy of Magical Arts, the Leveilleur twins were now sixteen - an age ripe enough to be considered adults in Sharlayan society. This is why Fourchenault, even if he was opposed to their travel plan, did nothing to bar their way when the hour of departure struck.
"It's our turn now," whispered Alphinaud, thinking of the day Louisoix had taken to sea.
"We are walking in grandfather's footsteps," replied Alisaie, her head bowed in a sign of respect.
Looking at his sister, Alphinaud was struck by the difference in nature that existed between their convictions. However, looking at them next to each other, hugging the rail with those identical grimoires hanging from their belts, clever who had been able to tell them apart.
Geez, they weren't as different as they thought they were.

Do you want to be up to date and know all the tricks for your video games? In gamesmanagers.com we enjoy playing as much as you do and for that reason we offer you the best tricks, secrets or tips for you to play non-stop. We offer you quality content and always updated to keep you up to date. That's why, in our website, you will find not only videogame guides but also tricks, secrets and thousands of tips so you can play to the limit. Are you ready to get it? Enter now and enjoy your videogame!
WoW - Strat 'express: Hellfire High Council ❯