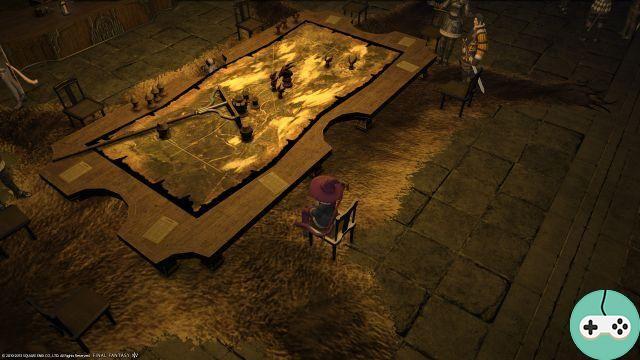 Several information awaits you today! Let's start with the most important.

Maintenance emergency was performed this morning and Yoshi himself explained the reason for this unexpected maintenance. A security issue was discovered at Market districts. The problem itself is not described, but Yoshi explains that it has only been seen in a few worlds, in certain areas and situations. If your data has been affected, you will need to contact support.

As for those responsible for this security problem, Yoshi reveals that the team will take "legal action against them."

This is a message from Naoki Yoshia, Producer and Game Director, about the security issue in the merchant districts, and the actions that will follow.

Hello everyone, this is Naoki Yoshida, producer and game director.

This is just a first point on the current situation, but let me explain the countermeasures that we are in the process of applying.

First of all, we have received numerous questions and numerous reports during the last few hours concerning illegal activities of third parties who have targeted part of the commercial districts.

At the moment we don't have a lot of reports of affected players, but in order to prevent the issue from spreading, we have decided to perform some emergency maintenance.

Please accept my sincere apologies for the inconvenience.

We are verifying the data and we promise you that it is all safe.

This issue has only been noticed in a few worlds, and only in certain areas and situations, so players who were not logged in are not affected.

Once we resolve the issue, restore the game, and confirm security, we will take legal action against fraudsters as well as countermeasures to further enhance security.

Once again, we would like to apologize for the problems caused.

At this time, we do not plan to perform a major restore of character data.

However, we are going to set up specific assistance for players whose data has been affected.

We have also obtained information on the IP addresses of the persons causing the problem, and are in the process of taking legal action against them.

A second message from the producer and director was posted this afternoon. It tells us that about 200 accounts are concerned. To be subject to the problem, you had to be logged in to certain worlds and sections of areas and have several hundred thousand gil. In order to put an end to the problem, the servers were immediately taken offline.

This is Naoki Yoshida, producer and game director.

Please note that we will not be posting more detailed information regarding the issue as this may encourage more similar behavior. We have compiled the main explanations for emergency maintenance below to make everything as clear as possible.

Only people who meet these conditions and who have been targeted by fraudsters are affected.

Details on the emergency shutdown of all Worlds.

This emergency maintenance seems to have been confused with the usual maintenances. We apologize for the confusion this may have created.
As soon as the incident was reported to me, the management teams implemented the announcement of this closure of the Worlds in the form of “Planned emergency maintenance”.
This report was to inform the players of the closure beforehand. However, since we were dealing with an external attack, we felt that a notification of closure of all Worlds risked on the contrary increasing the risks of attack by third parties and we therefore proceeded to the emergency closure of all Worlds. Worlds directly.

Although we did so in order not to make the situation worse, we did not announce this closure. We therefore apologize to the players who were logged into the game when the issue occurred.

Since this is a priority issue, we will be making announcements on this topic of discussion as well as in the Lodestone “Latest News”. We have also prepared an emergency procedure. Thanks for your patience and comprehension; 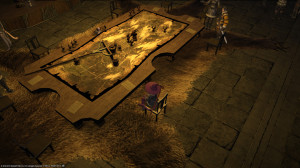 The 3rd report published this morning reveals that more than 2200 accounts were banned between October 31 and November 6.

The sale of gil for real money (RTM) and other fraudulent activities disturb the enjoyment and the overall balance of the game. The FINAL FANTASY XIV user agreement strongly prohibits these practices, and the players in breach of the rules have been sanctioned as follows:

Also affected are players who have generated gil and items through the use of third-party software. We are adding new content and new measures are constantly being taken to eradicate all forms of fraud.

Hiroshi Minagawa returns again on the controls of the PS3. In order not to distort his explanation, I prefer to put his entire post (not playing on PS3, I don't mean nonsense!).

The following parameters will be possible in the configuration settings of the cross action bar.

There are of course many players who would like to have access to more actions even if it takes a little getting used to, and these can indicate the shortcut crosses individually. Likewise, there are other players who will prefer to have access to only a few additional actions, and these can switch back to the same shortcut cross by pressing the keys in order.

* Of course, even by modifying the key assigned to the action bar through key customization, these parameters can be adapted to the keys you have chosen.

Now let's move on to the second question.

For example, suppose you selected "Left" for "Active Hotkey +1" by pressing the L2 key and then R2.

When you add a name to your blacklist, you add only the named character and not the entire account. Players would like that by adding this name to the list everyone compte is in fact ignored.
Elmoria replies that there are no plans to add the entire account to the blacklist. It's not technically infeasible, it's more a matter of politics: our CM explains that if an account was added to the list, we could find out which other characters are part of the account. This goes against ARR's privacy policy. Elmoria also specifies that, in the worst case, this "situation could result in harassment".

Following his response, players were surprised by its content, citing for example, that it is us, the players, who are currently harassed by the RMTs who create and delete several characters on the same account.

This is a very delicate problem! Please let us know what you think.

You nibble a little something, you engage in combat and there is the drama: wipe! And when you die, you lose the effect of food. The team brings good news: for the 2.1 the effects of food will no longer go away after you die.

In addition, the players wanted the HQ food has better stats and lasts longer. The team are keeping this suggestion in mind and haven't really given a definitive answer. 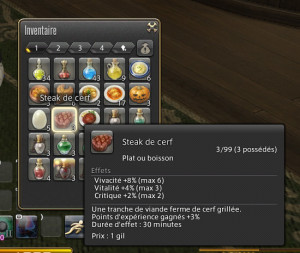 You've probably seen / shouts selling Titan wins or more. The team has ruled on this subject: if players offer their services in gil exchange, this is not a violation of the policy in place. On the other hand, if the character is acquired illegitimately or linked to an RMT activity, the sanctions will fall!

Last precision, and which also remains very vague: if the amount of gil requested by the mercenary group is extremely high, sanctions may be applied. Notice to these mercenaries, do not be too greedy.

So that closes this news, very rich today!