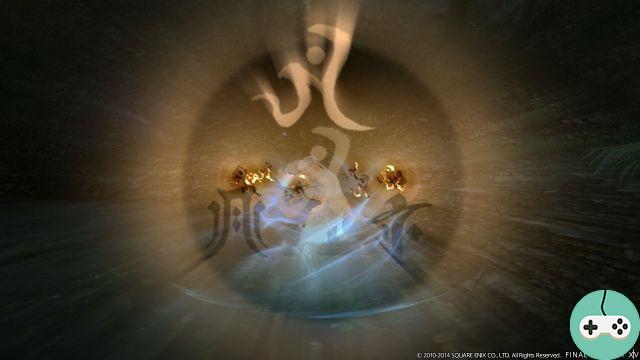 As mentioned in the last live letter, the Ninja will be reviewed so that his DPS is equal to that of the Dragon Knight and Monk.

To achieve this, the team works on two axes:

With its modifications, the Ninja will continue to have freedom of movement while maintaining the current rotation employed by players. These changes will be effective in update 2.45.

Find below all the explanations of Naoki Yoshida:

Here producer and director Naoki Yoshida,
Thank you all for your discussions and feedback on the ninja tweaks.

As we mentioned in the last letter from Producer Live, we'll be making ninja adjustments in Update 2.45 with the following in mind:

The main idea behind this adjustment is not to weaken the ninja. The goal is content compatibility et balancing with other melee classes, monk and dragon knight.
I would like everyone to understand this point.

■ Adjustments to the PT cost of certain actions.

I would first like to explain the idea behind the PT adjustment. In order for ninjas to use their ninjutsu, they must perform their attacks less frequently than monks or dragon knights. When the ninjas continuously attack the amount of PT consumed is less than that consumed by the monk and the dragon knight. Therefore, we will make adjustments since the difference is too large.


If we compare to the monk and the dragon knight, the ninja encounters fewer situations where he has to pay attention to the actions used due to the consumption of PT since at the present time it is quite difficult to lose PT on the long term. Since single target attacks and area of ​​effect attacks are more beneficial, we will be making changes to the following actions only:

Next I would like to talk about the DPS adjustments. Since the ninja uses the complex ninjustsu system which is quite different from existing jobs, we designed the ninja without positional attacks. However, if we take the following two aspects: the fact of not being able to move when using mundras for ninjutsu and the positive aspect of do not have positional attacks, the second point took over and became too important.
By aligning ourselves with the monk who needs to always have "Lightning Speed" active or the dragon knight who has to move around the monster, we will slightly decrease the ninja's DPS so that the balance is fairer between them. three melee classes. We will affect this without affecting the main concept of this job or its difficulty.

Based on this, we won't make any adjustments that might damage the rotation everyone uses, nor will we add positional actions, or add a level of complexity. We will balance the ninja by modifying the following actions:

We will balance the ninja with the other jobs while maintaining the following points:

I apologize for not being able to balance the ninja before its implementation and thank you for your understanding.

Let's move on to a lighter subject! Currently Disciples of Magic grumble a little, believing that they have less choice when it comes to armor design than Disciples of War. While the team can't promise anything, they've understood the distress call of these poor frumpy mages and are keeping in mind to add more gear to the theme of Final Fantasy XI. (I can only support the idea, I miss my Igqira set!)
Eye patches are in high demand, there has been a request for more and for mages as well. This suggestion is also adopted by the team.

The / random feature is missing from players. It is planned to be implemented with the 2.5 release.