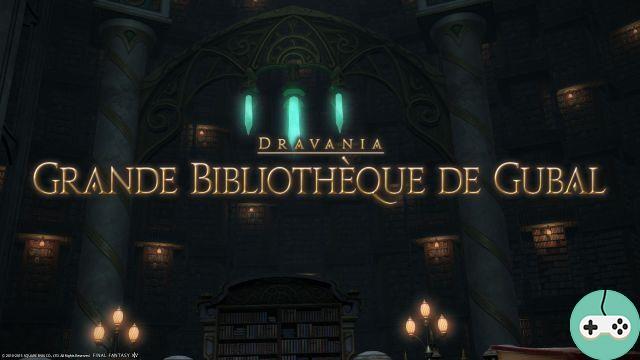 The last dungeon of the epic (Book Dusting) before reaching level 60, Gubal's Great Library will turn heads for all book eaters. 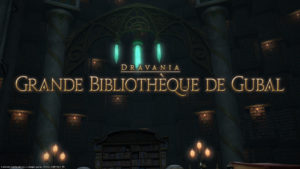 We start with the chests, to stock up on equipment potions.

Here you are in front of the first boss, Demonic wall of books. For this fight we will have to move very often. Like the Amdapor Castle Wall, this one will alternate AOEs on the ground: the first in line will be in the middle followed by two bands on each side. These will be accompanied by a circular AOE around a player.

When the Demonic Book Wall closes, take the opportunity to get behind him to avoid the attack he is about to make.

During the fight, the ground will be covered with ice as during your battle against Shiva. This icy ground will help you (or make it difficult for you) to get to the other side of the Wall when necessary.

The second bosses, Byblos turns out to be less complicated than the first. Byblos uses Bestial charge, an online attack as well as Aerobut which will cause clouds to appear in the arena. Last attack to avoid: Queue shattering, a cone AOE behind him. 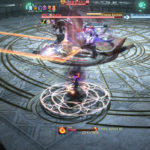 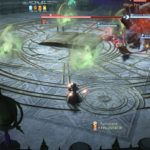 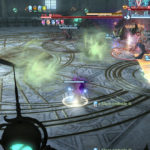 During the fight he will go back to his book and make two Pages sixty-four. Eliminate them quickly, beware of their online attack Ray of death.

During this time, one of the party members will be targeted by an energy ball. It will be necessary to bring this one to Byblos so that it collides with it. 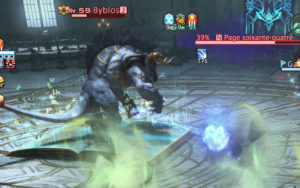 Byblos defeated, continue exploring the library. until you reach the last boss: Eternal Bibliotaph. It's going to be sporty.

Around the arena you can see six circular slabs, each made up of three purple circles. These circles will light up repeatedly when the Eternal Bibliotaph casts Call of nothingness, and you will have to stand on them to turn them off. If this is not done before the boss completes his attack, additional enemies will appear, making the battle worse. 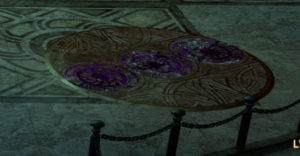 First a single purple circle will activate, requiring only one player to deactivate it. Then two will activate and require two players and finally all circles will light requiring three players to turn them off. Once deactivated, the platform will be surrounded by a pink chain.
Try to organize yourself before starting the fight by designating for example, the healer and a DPS to deal with the left side and the tank and the second DPS for the right side. It will save you some time.

Let's move on to the other combat mechanics. A signe will appear regularly on one and then several players. Stand at the edge of the arena, between two circular slabs. When the sign disappears, a ball will materialize where you were standing, exploding steadily and doing damage. It is therefore important to place them correctly. 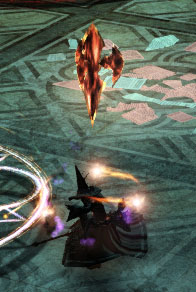 Stay focused and responsive and you should come to grips with this latest boss!

What would a library be if you couldn't read a little? Some books are available, and if you haven't had the time to read them, find them below.

The establishment of an imperial regime in the year 1522 of the 6th astral era saw the rapid prioritization of Garlemaldese society. This has resulted in particular in the appearance of prefixes marking the rank in the names of citizens. Thus, "zos" indicates the Emperor, "yae" the members of the imperial family and "wir" the other nobles. The same principle applies to army ranks, with "van" for generals, then in decreasing order of importance, "tol", "sas", "rem", "quo", "pyr", " oen ". Military technicians are also entitled to these kinds of titles: "nan", "mal", "lux", "kir" and "jen".

Regarding public officials, the dictator and the princeps senatus, their prefixes are "het", "fae", "eir", "dus".
Among the citizens, the "cen" patricians are differentiated from the "low" plebeians.
As for the lower class, it is marked with an "aan". It goes without saying that all the inhabitants of the provinces conquered by the Garlemaldais empire are for the most part considered slaves and can only aspire to the prefix of "aan". Only those who accomplish exceptional deeds for the glory of their new homeland can hope to climb the ranks, but it usually takes more than twenty years of military service.

The birth cycles
The falling lightning creates fire, which burns all things so that they return to the earth. This erects the mountains on which the ice is born, which melts to give life to the water. The latter evaporates and becomes the wind, which rises to the heavens and forms the clouds, themselves giving birth to lightning.

The three unwavering ancestries
The earth absorbs lightning. The water washes away the earth. Lightning dominates the water.

The three eternal subjugations
The fire is put out by the wind. The ice melts under the action of fire, The wind cannot penetrate the ice.

The two steadfast reigns
The place of the six elements is and will remain eternally above the shadows and below the stars. They approach and move away from these two poles relentlessly, but never completely reach them.

The discovery by Merlwyb Bloefhiswyn of the Silver Sand clan of a safe sea route to the Western Continent is of historical significance. In the past, sailors could only access it at the risk of their life and by praying for the elements to be favorable to them. However, these shores remain extremely hostile. The indigenous Mamool ja people who live there have demonstrated their bellicose tendencies on more than one occasion, and many are dangerous creatures to humans. Despite this, I intend to discover the treasures that conceal these lands.

There are no roses without thorns, as they say, and I must say that the beauty of the higher rank succubi is indefinable. No show has ever captured my aesthetic spirit with such force. Despite the difficulties, I managed to obtain a body to serve as a vessel. It only remains for me to prepare the ritual and to attract one of these magnificent beings of nothingness ... I of course took the precaution of chaining the corpse to the bed where I deposited it. Soon one of these exquisite creatures will be all mine! Ha ha ha!

I failed...
As I write these lines, the squid-headed filth that is chained to the bed is stirring loudly. I do not understand where I could have gone wrong, or how I am going to be able to get rid of this horror. All I can say is that my dream of unparalleled beauty is now shattered ...

FFXIV - The transition party is coming!

Add a comment from FFXIV - The Great Library of Gubal