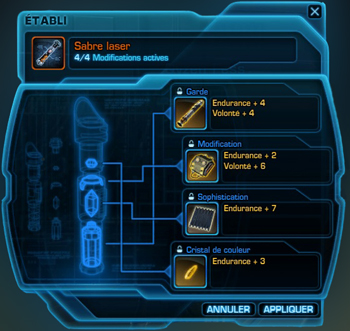 For my first contribution to this real oasis represents, I have the privilege to talk to you about a subject that is not always obvious when you have just landed: Equipment Modifications.

As its name suggests, this system makes it possible to improve the characteristics of an object thanks to small modules which "fit together". We discover, throughout the game, many items that we can thus customize and that we can therefore keep throughout our progression. A good thing for the fashionable Jedi or the pretty Sith who will find there a way to maintain a particular appearance while adapting the characteristics to the request.

There are two types of modifiable objects:

These are mostly high-level epic pieces of gear, but can be crafted by achieving a critical hit while crafting them. In addition, the additional location thus obtained only accepts modifications of the “Increase” type (see below).

But how does it work in practice, you will tell me with your candid air? Nothing could be simpler: just access the edit menu doing Ctrl + Right click on the object concerned. You will thus have the possibility of visualizing the modifications already in place and of replacing or extracting them for a few credits. 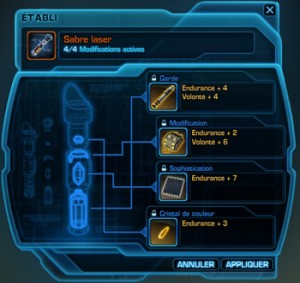 In this regard, it was originally planned to have to go to a modification workshop to make these changes. The developers finally decided that it would be less restrictive (but also less RP will say the fans of the role-playing game) to be able to access it at any time. Phew!

Now let's see in detail the different elements available to us to customize our equipment:

This is enough to carve out tailor-made equipment! Did you also keep your orange gear for many levels?