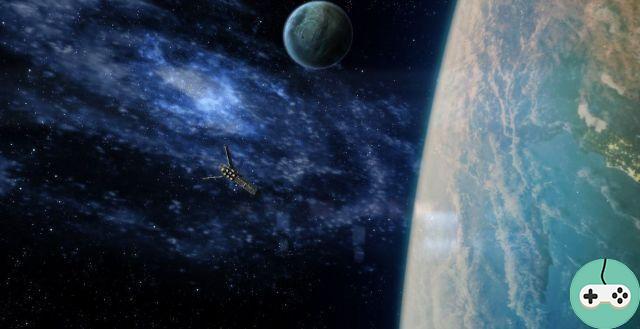 All fans know this replica of Star Wars episode II ... now with Shadow of Revan, they can also discover the famous planet Rishi, the first of the two novels of expansion 3.0. I invite you to discover it in this article.

Forward for Rishi! Direction therefore your ship and your galactic map in the Outer Rim, there you will find the planet Rishi, near Tatooine. 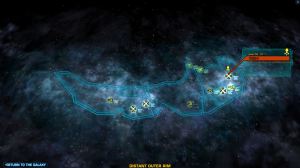 For a very long time, Rishi, located at the edge of the Outer Rim, was ignored by all. Its dominant species, the Rishii, intelligent avian creatures, led a simple and serene existence on this world of many islands. But since a pirate ship crashed into Rishi over a century ago, that has all changed.

Because of its large reserves of fossil fuel and its proximity to a largely unexplored dwarf galaxy, this tropical pearl has become the preferred meeting point for underworld types who wish to enrich themselves, be forgotten by the authorities or simply pass by. good time."

This is the description that you make of your galactic atlas with an image of the planet ... leaving you dreamy. 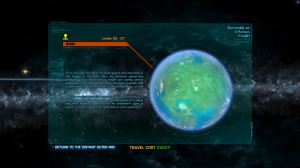 After a trip to hyperspace costing the sum of 2800 credits (3-star ship, breakfasts and lunches included, dinners and drinks in addition), all you have to do is disembark ... After having recovered on the new terminal in your starship the expansion-related story quest series. 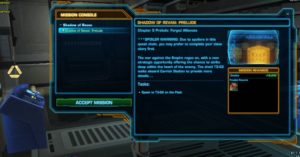 Note that, if you haven't already, this quest will require you to complete the Forged Alliance missions, but they are not required to start the Rishi quests. However, having done them will give you access to two additional cutscenes when you arrive on Rishi: with your team in your ship, and once on the ground. Come on, let's get off! 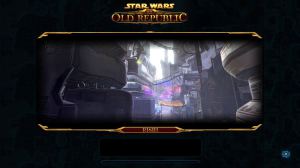 During the arrival animation, you may notice a small dwarf galaxy on the left. Do you recognize her? Yet a famous sibling also admires him in a medical vessel thousands of years later! 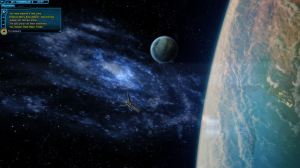 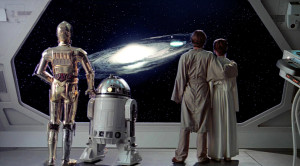 Once on the ground, in a small dock joined to the Republic and the Empire in the same way as Voss, one thing strikes us: the singularity of the planet and its architecture. We are far from the metals and ferro-concretes so common in the technological universe of Star Wars. To tell the truth, the first impression I had, and which has persisted since, was to be in the Shipwrecked City of Pirates of the Caribbean. Mixture of wood and metal, the appearance of the planet is unique, some like me will find it very pleasant, others not, according to the tastes. We also find a little Steampunk side in this architecture mixing wood and metal, particularly in the arrival hall with yellowish glass windows. 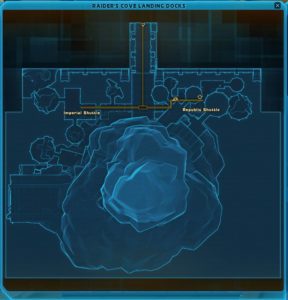 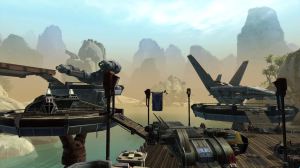 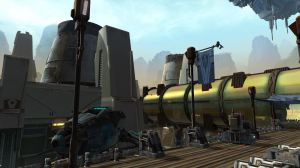 Once this airlock has been passed, we are finally in the city! The famous looters cove! And there a fan is already waiting for us to launch the question of the history of the planet. 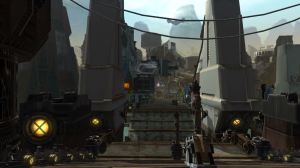 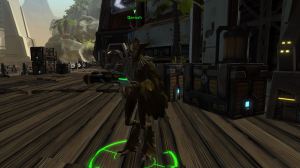 The city is made of the same wooden planks as before the airlock, and is dotted with numerous bridges connecting the platforms on stilts. 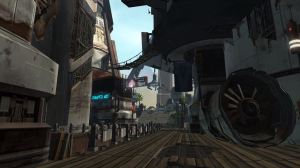 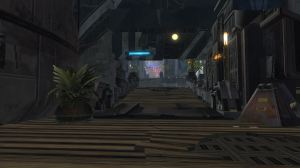 Some walkways also take you to the basement of the city, a nice place, which looks like a sewer! 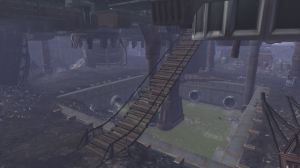 Near the landing pad, there are all amenities, level 55 basic equipment merchants, reputation merchant, crew skill trainers (one of them has a datapad of ours). read!), or combat trainers ... It is a relatively peaceful place where fights do not take place, even between Sith and Jedi there is a status quo, and the Jedi knight s practice with the Sith warrior while waiting for the client! Besides ... don't you think there is a detail wrong? 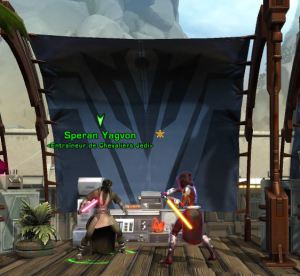 The only thing missing is a hold! Oh and the cantina! But she can be found further away, in the recreation area! Take a look at the map, it's a rather large city, on the edge of the jungle and two minutes by speeders from other areas. 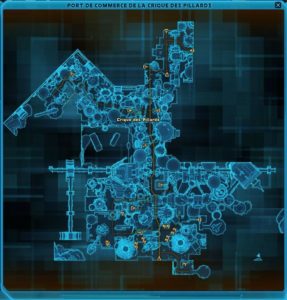 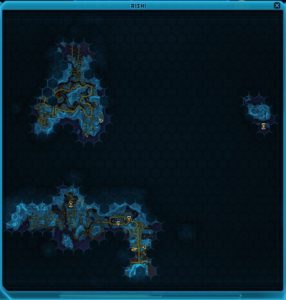 Head north towards the recreation area, there is a little more austere area to pass, but we finally arrive at the very heart of Rishi's recreational pleasures! The flyers hadn't lied, the place was really nice ... despite the Kowakian lizard monkeys that swarm. 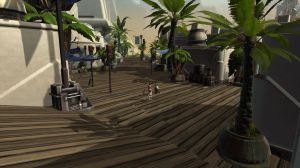 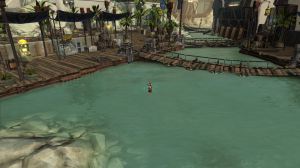 And this pisciiiiine! Immeeeeense! Aaaaah and right next door, yes good, the cantina ... but above all, the famous black sand beaches of Rishi! There's even my reserved tent with a great seat! Come on, I am landing here, and I say see you soon! I deserved a few vacation! 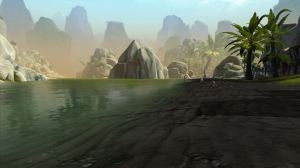 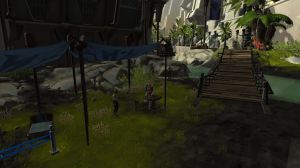 If you want to discover more, like the Rishii village or the animals of the jungle, do not hesitate to come and take a tour, the local guys will organize a whole bunch of excursions for you! Flashpoint or Operation starting from Raider's Cove, and yet another Flashpoint in nearby Rishii Village, not to mention a series of daily quests, which you will only unlock like Oricon after completing the story mode of the planet!

And you, how do you find this planet?