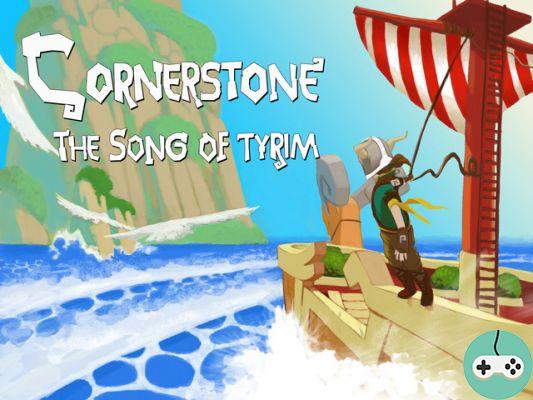 I invite you to discover this week a game with atypical graphics, strongly inspired by Dark Souls or Zelda, which takes us into an open world that emphasizes adventure, exploration and combat: Cornerstone: The Song of Tyrim. 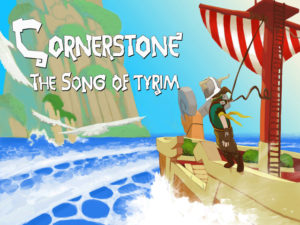 The kingdom of Nygard is on its way since the disappearance of the Viking warriors. To the east, the Gou-Hai Empire stretches under the leadership of Emperor Ju-Long. His beloved wife Empress Mei-ling fell seriously ill, and Ju-Long puts the blame on the Vikings. Rumors originate from the western kingdom of Himalu, ruled by the young Sun Queen Zemitara, speaking of human sacrifices and forbidden magic. The Muavi brothers in the south, Mamba and Vasabi, sons of the great chief Jaja Muavi, face the threat of civil war. The Mokaga Desert is a dry and barren land, without Viking trade the future of the tribe is uncertain.

The remaining Vikings are mostly women and children, with very little means to defend themselves. They live under the growing threat of their enemies, their only hope of survival is the increasingly unlikely return of the Viking warriors. Tyrim lives on the island of Borjana with his mother Alma and his younger sons Vida and Birka. Her father went on an expedition with the men of the village, leaving the elders, women and children behind but no one knows where they are, as they have been missing for several years. 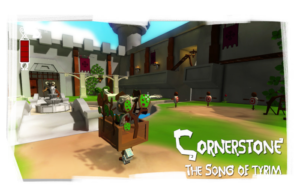 And that's where the game begins, we play this young boy who wants to go in search of the men of the village! The world is structured like Wind-Wake, with a series of connected islands within a vast ocean. The main method of transport between the islands is by boat, supplemented by a fast mode. This boat is not only a mode of transport, it also has a harpoon, a bank and even a garden to rest and recover its life with seeds.

Cornerstone encourage l'exploration allowing to discover useful tools and skills to advance. Game progression is not based around increasing stats or collecting experience. It is non-linear, which means that most regions are accessible from the start, but some are initially more difficult than others without the appropriate equipment (which nevertheless remains secondary).

Fighting is tough and doesn't encourage the clubbing of a touch. Each enemy has a unique behavior, it is up to us to discover and exploit their weaknesses. The environment can be an enemy as much as an ally: field of vision, traps, tight spaces, elevated view ... Enemies can also take advantage of the environment by throwing objects or demolishing structures. Monsters are rarely alone or isolated, it is better to have a plan to engage in combat so as not to succumb!

Beyond the enemies, each more nasty than the other, we will also be able to benefit from:

On the graphics side, the studio wants to amaze players with a stylized geometry with simple textures and realistic rendering. Of course, inspiration is taken directly from Viking culture. The game is supported by a small Swedish studio of ten people. The Kickstarter campaign is for them the unique opportunity to finish the game full time and to cover the various costs for the finalization (licenses, music, marketing ...).

They need a minimum of $ 30, even if they already have lofty goals of up to $ 000! The game starts at $ 100, the downloadable version of Cornerstone: The Song of Tyrim. At $ 000, you can access the beta and the DRM version. At $ 5 we're in the credits and couples will appreciate the $ 10 version with two games.