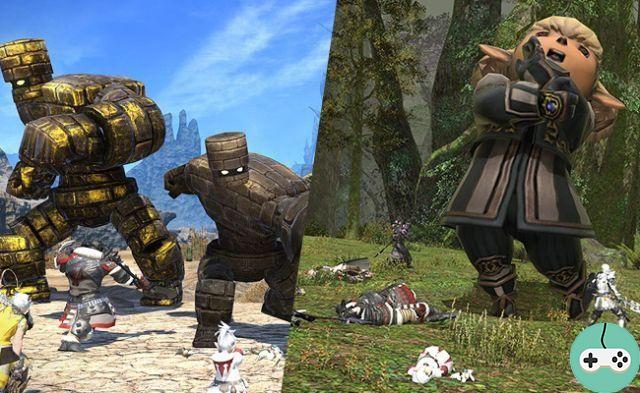 Square Enix had announced several events to celebrate the anniversary of DQX, Final Fantasy XI and the return of Final Fantasy XIV with A Realm Reborn. ARR therefore sees two events land: Aberrant Abomination and Granite Creatures which will take place from January 21 at 11 a.m., spanish time to February 3 at 15:59 p.m. 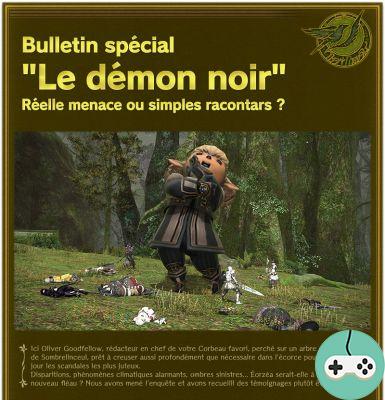 Five years ago, terror reigned among the people of Eorzea as Dalamud, a prison once thought to be one of Hydaelyn's two moons, began its inexorable fall. Day after day, the star became more massive in the sky, people were agitated, and the Garlemaldais empire gained in confidence. The leaders of Eorzea then launched a last-ditch operation aimed at preventing the impending cataclysm, but nothing could prevent the rampage of Bahamut and the Scourge that changed the world forever.

You are probably wondering why I am returning to this dark chapter in our history. Well, the answer, while disturbing, is simple: Rumors have it that another scourge may befall soon. Indeed, strange events, which are not unlike those which marked the end of the 6th Astral Era, are currently occurring in the four corners of Eorzea. A figure clad in black would have even been seen in the eye of these strange storms. Although no witnesses have survived long enough to testify, rumors point to a hysterical laugh, a blood-curdling chuckle, audible for several yalms around.
People live in fear of imminent destruction, but officials speak of a simple plot of Garlemaldan origin; a diversion, if you prefer. While I disagree with their version, let's assume for a moment that they're right. Before the rampage of Bahamut, heralding the 7th Umbral Era, Eorzea experienced a large number of inexplicable phenomena including showers of flames or unexplained behavior of wildlife. Dalamud's influence was omnipresent and we have been able to trace the origin of his fall to the Garlemaldic Empire, and more precisely to a conspirator by the name of Nael van Darnus. It goes without saying that these telltale signs represent a threat that requires immediate investigation, or one simple conspiracy could once again change the face of our world.

For me, there is no doubt that terrible forces are at work. But, alas, my weapon is a feather and my shield a mere sheet of paper, and this matter is far beyond my area of ​​expertise. This is why I need the help of all the adventurers who will read this message. Look for the origin of these supernatural disturbances so that Eorzea finds peace.

Visit the site for the official announcement. In reward, you will be able to get a beautiful (and not abominable) Shantotto doll! 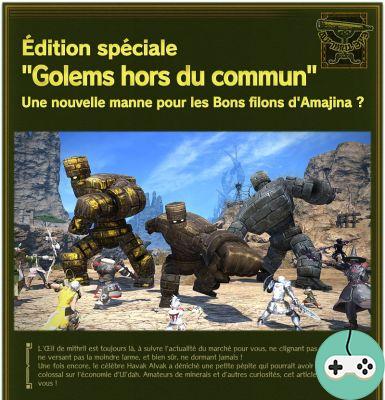 Amajina & Sons Bons Loins Society has a keen interest in curious golems that you may have heard of if you frequent the Uldian markets. As a good journalist, I obviously wanted to know more about the reasons for this sudden interest.

You should know that these magical monstrosities were particularly appreciated by our ancestors, who used them to transport heavy loads or to fight in war during the 5th astral era. It is for this reason - at least, it is the official thesis - that these homunculi of rock and clay appear near the remains of this period as well as around the ruins of the ancient City of Belah'dia.
However, the golems in question today are different from those known to the Eorzeans, both in form and appearance. This is undoubtedly what has led some to think that they could be made of rare and precious materials.
If this fact were true, it would represent a colossal source of income for mining companies. You can better understand why the Good Lodes of Amajina and Sons sent their best man to investigate the field now.
While industry experts are following developments closely, they are not the only ones interested in these creatures. Merchants and wealth-hungry adventurers are also part of the game. Everyone wants their piece of the pie, and the most mouthwatering, if possible!

Count on me to continue investigating, and do not hesitate to contact me if you learn anything on the subject. You will certainly find me interviewing people near the Adventurer's Guild.

Visit the site for the official announcement. Two items are up for grabs: a brute mask and a mechanical Siman mascot.

I can't wait to get my hands on Shantotto's mascot!


Do you want to be up to date and know all the tricks for your video games? In gamesmanagers.com we enjoy playing as much as you do and for that reason we offer you the best tricks, secrets or tips for you to play non-stop. We offer you quality content and always updated to keep you up to date. That's why, in our website, you will find not only videogame guides but also tricks, secrets and thousands of tips so you can play to the limit. Are you ready to get it? Enter now and enjoy your videogame!
Rift - Harvest: the butcher's shop ❯

Add a comment from FFXIV - Two events for the anniversary