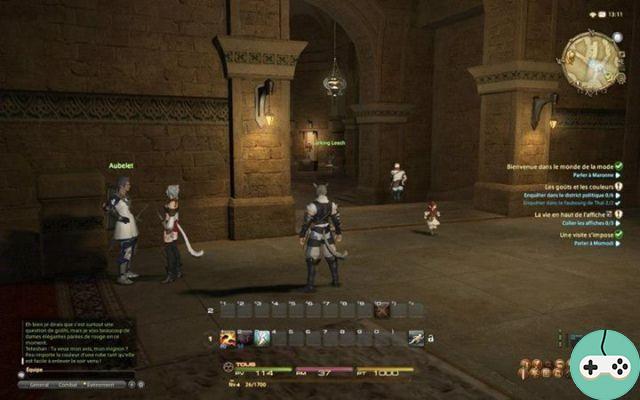 For the past few weeks, players have been complaining about a phenomenon of a lag between the information seen on the screen and what is really happening (example: you are outside a damage zone, but you take it when even). A reaction from the team was eagerly awaited by the entire community as posts on the subject on the beta forum number in the thousands.

The director producer has, as promised, explained the situation and the work that was underway to remedy this problem. Our experience of the game should improve significantly during phase 4 and therefore for the release.
Find below the full message of Yoshida always so verbose!

Issues with area attacks and latency

Here your producer and director Yoshi-P.

Thank you all for your comments on latency issues and dodging enemy attacks. We're still working on fixing these issues in time for Phase 4 and the release, so I want to update you on the current situation.

This post will mainly deal with area attacks that are difficult to dodge or that hit their target even though the target seemed to have avoided it.

When Ifrit was casting Eruption in Phase 3, the animation slowed momentarily before the explosion. Due to this slowdown, there was a slight lag between server verification and explosion. This has already been fixed for phase 4 and the release.

1. Recording of damage suffered by the player

In phase 3, in order to determine if the players were in the impact zone of an attack, the position was based on the circle surrounding them and representing the space in which they are.

In addition, in order to maintain a better balance between races, the radius of this circle was the same for all characters. Because of this, even though it looked like you fled the impact area in time, part of the circle was still within range. This gave the illusion that you had narrowly dodged the attack and produced different results for different races.

For phase 4 and the exit, this circle has been reduced to create only one central point in the middle of where your character is standing to better determine your position.

Due to the "online" nature of the game, there will always be a very slight lag between the actions taken by the player and the time it takes for them to be returned after being processed by the server.

In FFXIV: ARR, player position is checked by the server every 0.3 seconds. The timing is processed and synchronized according to the servers to avoid slowdowns between the actions you perform and what is displayed on the screen.

On the other hand, during phase 3, this synchronization phase was not carried out due to the rigorous checks made at the level of the servers, creating a gap between what was displayed at the level of the progress bar of the enemies and the position of your character. Therefore, even if you felt like you were out of the impact zone, you still took damage.

Adjustments are underway to minimize this lag, and the timing should be improved between enemy progress bar, area of ​​effect beacons, and attacks.

Rest assured, we are doing everything we can so that players can dodge attacks based on the enemy progress bar and beacons for area attacks.

Players in the rest of the world also needed to access data located in Japan for version 1.0 and this caused more slowdowns while the information was transmitted to the server. In addition to the creation of regional data centers and the measures described above to improve synchronization with the servers, we continue to work hard to provide an enjoyable gaming experience for all of our players.

(Even with a very fast connection, I think there is still a margin of error in the order of 0.1 seconds for the cast bar so try to decamp in time when playing as a team.)

All that remains is to wait for phase 4 to test these improvements!


Do you want to be up to date and know all the tricks for your video games? In gamesmanagers.com we enjoy playing as much as you do and for that reason we offer you the best tricks, secrets or tips for you to play non-stop. We offer you quality content and always updated to keep you up to date. That's why, in our website, you will find not only videogame guides but also tricks, secrets and thousands of tips so you can play to the limit. Are you ready to get it? Enter now and enjoy your videogame!
Albion Online - Joseph update available ❯