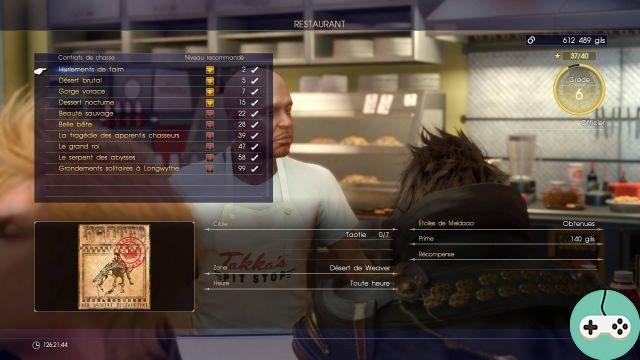 In the world of FFXV, monsters reign supreme outside of towns, hamlets and resorts. Meldacio's Guild, an organization of volunteers, was founded to defeat these formidable enemies, and it is through hunting contracts that everything happens! 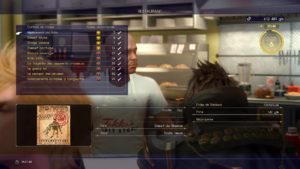 To obtain a hunting contract, all you have to do is go to a restaurant owner to consult the list of available hunting contracts. Once a contract has been accepted (you can only take one at a time), all you have to do is complete it by killing the designated target (s) and return as the winner to collect your reward! However, there is some information you should know about contracts.

First of all, you should know that there is two types of contracts of hunting :

Contracts can be considered “difficult” for two reasons; either it is a group of powerful and / or numerous enemies. Either it is to face an extremely powerful boss.

In addition to the types of contracts, there is other information to consider:

For example, a Hard Hunt Contract of Recommended Level 40 may be much more difficult than another Hard Contract, but one of Level 45, because you will face a boss there. Before each contract, I therefore advise you to prepare (and even save), just in case!

If you meet all these conditions, all you have to do is look at the different rewards obtained by validating the contract:

You start out as a Grade 1 Hunter. Each time you complete a Hunt Contract, a certain number ofMeldacio stars will be granted to you. These, when you have enough, will automatically switch you to higher grade. Upgrading to a higher grade does two things:

Hunting contracts are scattered all over the world. Indeed, these are offered by restaurateurs and each of them has different contracts. In addition to offering different ones, it will not be possible for you to do them all at once and move on to another, because each restaurateur will offer several of different grades. You will therefore need to come back to see former restaurateurs after acquiring new hunter ranks.

The following list will be very long, as there is a total of 102 hunting contracts ! In order to find your way around more easily, I will classify them in relation to the places where they can be recovered, the required level as well as the necessary rank, when there is one required.


Little personal tip : in order to avoid doing dozens of back and forth between restaurateurs looking for a contract that you did not do, I advise you to note each time you arrive in a new restaurant, s 'there are contracts that you have not yet completed and their ranks. This is in order to easily find where to return each time you gain a new rank!


Happy hunting to you!