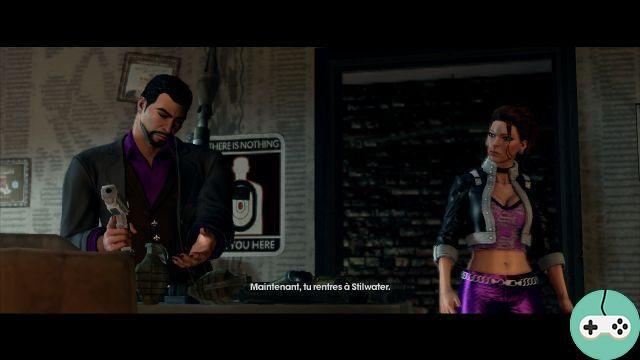 Ah, Saints Row… What a strange license! After a nice first episode but taking itself too seriously, the license decided to take a new turn. We already felt it well in the 2nd part, but the 3rd is a total delirium, from start to finish. Also, it therefore seems normal that it is this opus that is brought in priority to Nintendo Switch. Do we lose in the change? This is what we will see in the following lines.

For players who will discover Saints Row with this Switch version, it is worth clarifying one point: do not expect a Grand Theft Auto. The script worked, the characters deep, the universe full of details ... send it all flying. Except sharing an open world and a 3rd person point of view, Saints Row has nothing to do with the title of Rockstar. 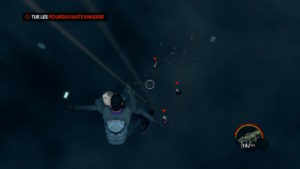 After 10 minutes of play, we escape from the plane of the "bad guy" and we save our friend by shooting enemies in the air ...

As for history, the same, although Saints Row 3 is the direct continuation of the first 2 opus, you will not be lost by disembarking in the game. Surprised, certainly, considering that the game begins with a spectacular heist, with a reporter who follows and films the gang of Saints back and forth. The robbers wear masks… taking their own face, in a “big head” version. A few jokes and insults will be swayed, just enough to make us realize that we are going to play Saints Row to let off steam, and to have a laugh if bold humor works on you.

On our side, we embody the leader of the gang of Saints (the choice is offered at the beginning and during the adventure, via a fairly extensive character customization system, which allows a lot of fantasies), who will have to perform the dirty work after a new group, called The Syndicate, arrives in Steelport (the city of the game) and undermines the influence of the Saints by emptying their bank accounts and ruining their gang's reputation. It will therefore be necessary to start from scratch and to make a name again by carrying out many missions which will make them rake in money and reputation galore. 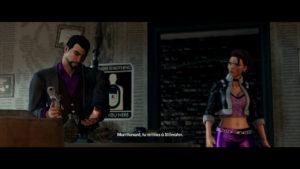 Probably one of the most "normal" dialogues in the game

Most of the missions will do in the bidding. Difficult to remain unmoved in the face of such situations. Apart from the police forces which are quite classic, the other enemies will make you smile. Launching a rocket at an army of strippers equipped with AK-47s thus becomes a "normal" objective in Saints Row. Explode 12 helicopters as well and 20 armored vehicles as well. The missions, in their structure, remain - in themselves, usual (going from point A to point B, capturing a point on the map, killing this or that target), but the ubiquitous “one-upmanship” coating makes all pleasant to navigate.

Regarding this port, nothing dramatic to report. Technically not crazy when it was released 8 years ago (that does not make us any younger), the game retains its graphics of the time. Understand by this that the Nintendo console has not got rid of the generous aliasing of the game, and textures straight out of the PS3 / X360 era. The advantage is that the game remains fluid in most cases, whether in portable (720P) or TV (1080P) mode. Only a few slowdowns were able to be felt during certain phases of the actions, with explosions galore, which would certainly make Michael Bay dream. 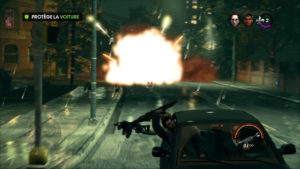 When I tell you that Michael Bay would love this game ...

On the gameplay side, nothing has been reviewed, and it hurts a bit. The cover system is practically non-existent here, and it will be necessary to readjust to these disjointed phases of action which send us back to the past. Still, once the pill is over, we get used to this game little by little, which is in the standards of the beginning of the decade, and we also always appreciate being able to browse the game in cooperation (local and online).

In the end, this port of Saints Row is fun. at 30 €, the bill is not too steep, and browsing Steelport with the Saints spins the banana. Whether we discover this 3rd part or not, we will appreciate the adventure, as long as you are a customer of heavy humor.

FFXIV - Epic and Adventures of Hildibrand