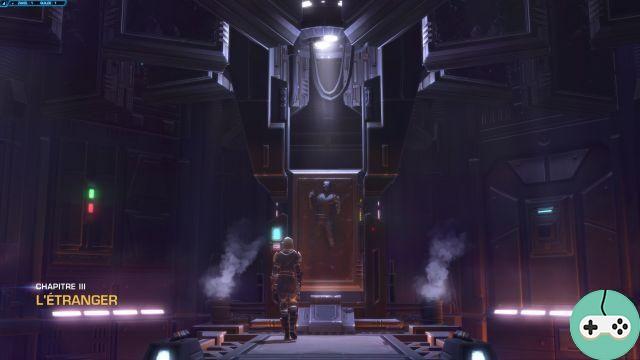 Attention this article and those which will follow contain spoilers on the history of KOTFE then KOTET. If you want to keep all the surprise on this content, stop at these lines.

Today, let's resume the thread of the history of the chapters of KOTFE in master mode. Last I heard, after pursuing the Emperor and the latter having found refuge in our minds, we were captive of Arkann, the new leader of the Eternal Empire. Unfortunately we were poisoned in the carbonite freezing process and we are dying, but maybe there is still hope because in a dream we heard Lana Beniko asking us to wake up . In doing so, it frees us from carbonite and injects us with a poisoning treatment product. 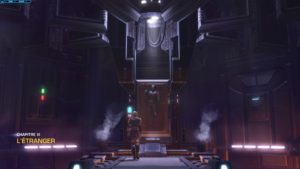 So here we are free of carbonite, but the trouble is just beginning. It will be necessary to flee from Zakuul and hordes of skytroopers will be in pursuit without counting other more tenacious enemies. During the journey, we find that Vaylin is chasing us and Lana tells us that a former Zakuul soldier, Koth Vortena, is waiting for us with a ship so that we can flee far from Zakuul. Obviously, the paths are full of groups of skytroopers. Some will deal pretty nasty damage over time with Corrosive Grenades, but you can purge or dispel them if you have an ability to allow it. At the same time, Lana Beniko will accompany us and become our first partner. I advise to place it in healer if you are not yourself because it will save you time in the long term. By doing this, you will be able to chain together groups of skytroopers more regularly without having to play too much on your defensive spells and without regeneration that would interrupt your progress. 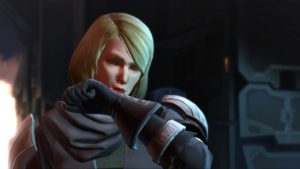 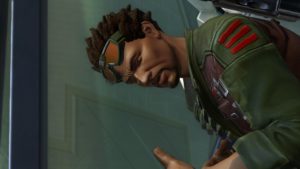 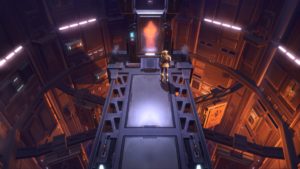 Discovery of our escape 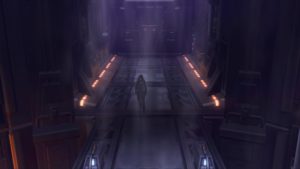 Continuing on your way, we will reach an elevator that will take us to more inhabited areas and we will end up exiting on a bridge guarded by a ground attack walker. This first opponent is powerful and has 202 life points. He is not very strong but will call on several skytroopers during the fight which will make it difficult for us. Skytroopers can be pushed back into the void or controlled. If this is not possible for you due to lack of abilities, just eliminate them before they kill your healing partner. If you find it difficult to beat him even while doing so, consider your inheritance abilities which will increase you and your partner's stamina and give you regular light healing. 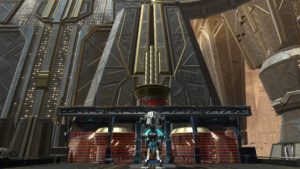 After getting past this difficulty, we notice that Vaylin has caught up with us. She's not far behind and we have no choice but to enter a skytrooper factory. In doing so, she chooses to bury you alive and causes damage to an energy reactor which then threatens to explode. As you progress through this factory, you find yourself in the reactor control room. Our mercenary then chooses to do his best but ends up fleeing before the explosion of the reactor which will cause tens of thousands of victims. Having fled this danger, we find ourselves in a maintenance area which is our meeting point for exfiltration. 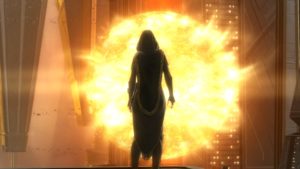 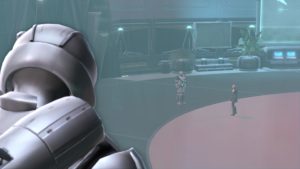 Infiltration in a factory 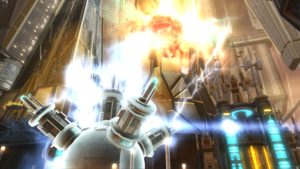 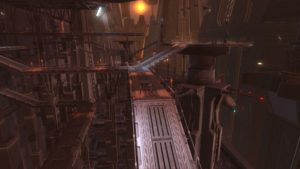 This location is infected with skytrooper who will not last long and will give way to two Knights of Zakuul: Tanek and Novo. 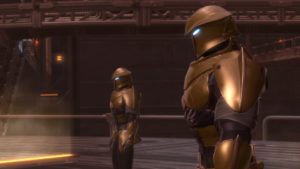 They are less difficult than the ground attack walker because their damage is minimal in comparison. They do, however, have some pretty awkward abilities as Novo will jump on you regularly, cutting off your pipes and propelling you away soon after. Tanek has at least one channeled ability to him, the flow of force that deals area damage before knocking everyone around him back, causing Novo to jump and crush again in the process. Concentrate on eliminating one of the two protagonists and remember to replace yourself so as not to be thrown outside the limits of the platforms.

Once this last fight is over, Novo flees but Tanek does not have the opportunity and be slain by Lana on our command (obscure choice). Then comes Vaylin and a new wave of skytroopers. Lana prepares to confront him but Koth arrives at the same time and fires, forcing Vaylin to defend himself, thus allowing us to board his ship. 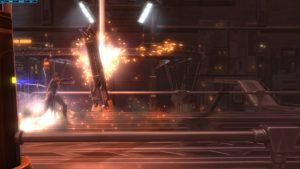 Our escape is not yet guaranteed, however, as the planet's defense systems fire and damage the ship. Fortunately, they will be quite quickly cut by T7-O1, thus ensuring our escape. For his part, Vaylin informs Arkann of our escape who will order that we be searched.

Add a comment from SWTOR - KOTFE in master mode # 3