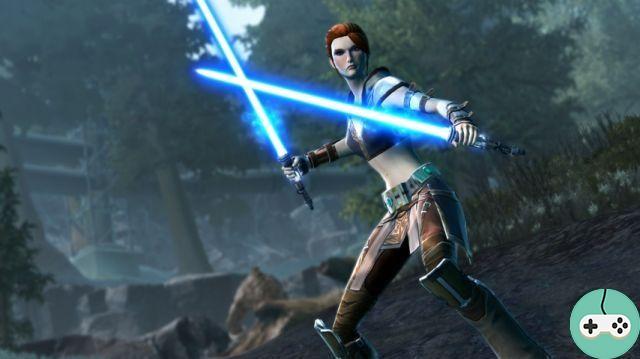 This guide is intended for Nightmare Mode players. 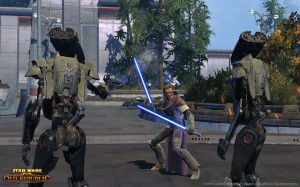 This guide is brought to you by Mothership. We offer here a lighter version of his guide, which you can find in full on his site.

What is the sentry?

The Sentinel is with the Guardian, one of the two advanced classes of the Jedi Knights.

It is a class dealing melee damage (CtoC) easily recognizable, because wielding two lightsabers to defend itself, to attack its enemies. Equipped with an intermediate armor, it is a class only directed damage known as "DPS". She is an effective character, highly sought after in a party, for inspiration, sustained damage, and great mobility.

There are 3 disciplines that can be used in Sentinel:

Note: Before getting insulted on the "Combat: Medium DPS" weakness, it's slightly lower. Depending on the fights, it will even be higher.

The Surveillance specialization I'm going to talk about here is characterized by the application of damage over time, called "DoT". She has four exclusive and priority attacks in your cycle to perform a significant DPS. 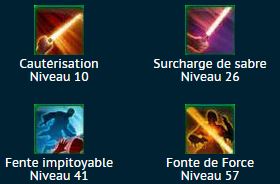 This discipline is widely used in PvE for several reasons:

Since 3.0, the old Talent system has been replaced by Disciplines, it is no longer modifiable and therefore common to all Surveillance sentries.

Only 7 usage points can be modified, to be adapted according to the battles encountered. These utilities are classified into 3 categories: 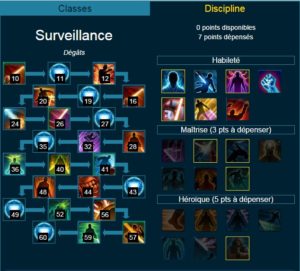 They have the effects of: 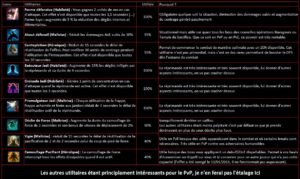 As a general rule of thumb for your DoTs, they should only be refreshed when it ends. Doing it too early will deprive you of an "already paid" tick. Now that our powers to pose them are constantly available, this is no longer a proc issue or whatever. The more they are there, the better your DPS.

Saber Overload : very often posed during the Force Leap with which it shares the CD, this DoT does not require a GCD, so you can place it at the same time as another action. A maximum of three DoT stacks are placed, one per attack you make on your target. The higher the accumulations, the greater the damage.

Force font : more profitable than Cauterization, little GCD used for a substantial DPS. In addition, if used well in your cycle, it is free (excluding the pull cycle). It also has a range of 10 yards, which is interesting when a boss is moving and your range exceeds 4 yards.
Cooldown: 18 seconds. Ticks: 0, 3, 6, 9, 12, 15, 18 seconds.

Merciless Lunge : your biggest source of damage, like in 2.x, you have to try to launch it as soon as it is available. She applies a Merciless Buff, allowing you to revive her more often. If well used, after 3 executions, the Force Cast is free.

Frappe expert : Damage reduced, but cooldown reduced to 18 seconds. It remains a very good source of damage compared to the GCD that it requires.

Elimination : your execution power, usable when your target is below 30% health. Useful as a replacement for a Lunge in your cycle as it does more damage. It will not be possible for you to use it as soon as it is available without risking being naked in Concentration and repelling the use of a more interesting power (DoT, Merciless Lunge, etc.).

Twin saber throwing : New, DoTs have a 20% chance to boost Saber Throw damage by 100%. The damage of this attack has been reduced and its cooldown increased. There is therefore no need to launch it without the "Mental Incandescence" buff. It should not delay your cycle (except the powers of Strikes, Slits etc.).

Slot : you will have some holes in your cycle, you will then have to use the Lunge or the Strike according to your need in Concentration for the following attacks. If you are rich (in concentration), use the Lunge, otherwise the Strike.

Force sweep : AoE only, it now allows you to propagate your DoTs on targets within its area of ​​effect (5 meters radius). The management of its area of ​​effect is not easy and do not dream, you will not be able to have the same area damage as Shadows, Scholar, Maverick, etc. If you really want to do AoE, play Concentration. On the other hand, it saves you from resting DoTs on the next target you are going to attack. The DoTs being quite long (12 and 18 seconds), you will be able to propagate them again on other targets etc… Be careful this disturbs your cycle, take the opportunity to increase your Concentration before returning to a normal cycle.

Force Jump : Often coupled with your Saber Overload, it allows you to generate Focus but also to get closer to your target. Be careful, respecting your cycle is one thing, being far from the boss without the Force Leap available is rarely a good idea. Learn from your battles to know where and when you can use it.

Relentless strike : the "classic" generator of all Sentinels, it now gives a slight boost every 30 seconds via the 2-piece set bonus version 3.0.

Hit : your weakest power, but which allows you to generate Concentration. I'm repeating myself, but use Lunge if you have a lot of Focus, otherwise use Strike. Passives allow us to gain them over the course of the fight, but their performance has been reduced during the upgrade to 3.0.

Plasma lick : Your burning effects have a 20% chance to grant 1 point of Concentration. This effect is only available every 4 seconds.

Burning concentration : Your attacks that deal direct damage and critically strike a target on fire generate 1 point of Focus. This effect is only available every 4 seconds. Additionally, Merciless Strike makes its target attackable for 45 seconds. Attackable targets take an additional 7% elemental and internal damage.

I will be inspired by what I read at Dulfy's through what Oofalong did for the sentry guide. With his permission, I used his rotations, which he uses through GCDs which is pretty telling.

The management of Strikes will also depend on your luck, DoTs and attacks can give you free Focus, however you cannot anticipate them or take them for granted. 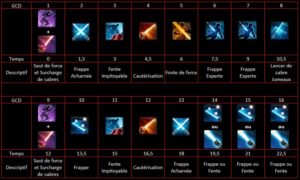 Pulling is clearly the time when your Cycle isn't crystal clear until your Merciless Buff (generated by your Merciless Lunge 2 by 2) is at maximum (4).

So you won't have yet Source + 3 Merciless Lunge + Force font free. It is only after having placed your 2nd Pay Casting, that your cycle really begins to enter the "classic" rotation below.

La Frappe expert is not launched twice, but uses 2 GCD (channeling = 3 seconds) to run completely. You can earn a few tenths by interrupting it when the 3rd tick has been applied by chaining with the next attack.

Do the Cauterization after Force font is under study, I have to do several tests with my new equipment at the same time. It will be very close in any case.

The times in seconds vary according to your alacrity (which affects the duration of DoTs and GCD). It should also be noted that your "lag" suffered can make it difficult to perform the cycle perfectly.

Between each Force font, you must place 3 Merciless lunges in order to get the following one for free. It's complicated when you change targets every 4 morning, otherwise it fits very well into the cycle.

Hit ou Slot really depends on your current Focus and what you're going to need to launch shortly.

Le ZEN is not included in this cycle but, if all goes well, it will place right after / during your Force Leap + Saber Overload. To optimize the performance of your DoTs under ZEN,it is always optimal to be at 3 accumulations of overload when the ZEN is launched, however it is quite difficult to respect this in 3.0.

So much for this "condensed" guide. If you want to know more about Sentinel Surveillance, I can only invite you to visit the Mothership site to find its complete guide, with the optimization of the equipment, the study of parses, etc.