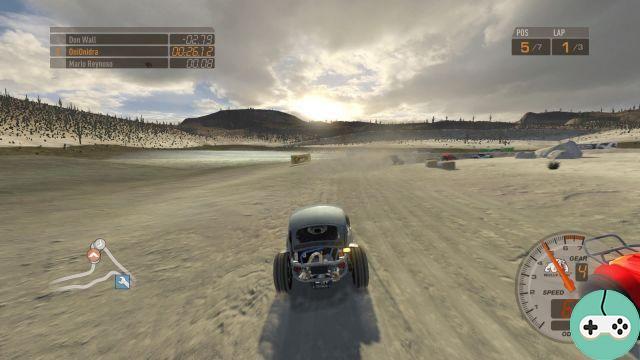 Released in 2008 on the older PlayStation 3 and Xbox 360 consoles, Baja: Edge of Control was released on September 14 in a remastered version for PC (Steam) and the next-gen Xbox One and PlayStation 4 consoles. that I was able to discover the title, namely that I had not played the original version, so I could not compare.

In figures, Baja offers more than 1500 kilometers of varied landscapes, spread over more than 100 tracks in 9 open worlds to be traveled aboard 160 vehicles of different classes. According to the press release, the HD version offers better immersion thanks to graphic improvements (4K, 60 FPS…), more authentic races and more accessible gameplay thanks to improved controls and user interface . Let's take a look at the facts!

Before talking about the game itself, let's take a look at the controls which, as you will see, offer very fine handling. 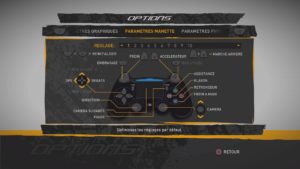 Not all vehicles are, of course, accessible from the start, they have to be purchased as well as parts that will improve performance. 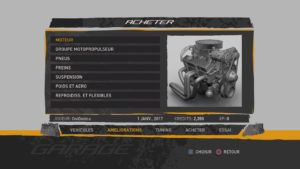 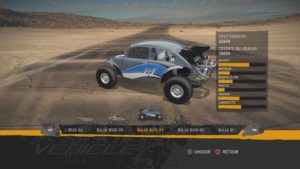 Without spending a cent, there is on the other hand the tuning which gives the possibility of adjusting the characteristics of the vehicle while remaining within the overall thresholds. 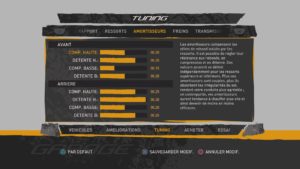 I started my discovery with a few games in split-screen multiplayer with my son. It is possible to play with up to four players locally, but also with friends on the internet. In the case of the split screen, at the start of the game, different game modes are accessible (circuit, rally, side race, baja and ride) and several maps, even if I did not see a big difference overall. of gameplay once in the game between each of the game modes. 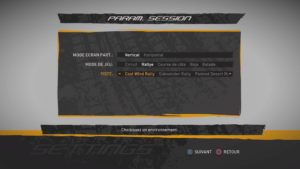 Each player is then invited to choose an all-terrain vehicle among 4x4s or even buggies. Vehicles are characterized by fairly complex gauges defining their capabilities in the field. 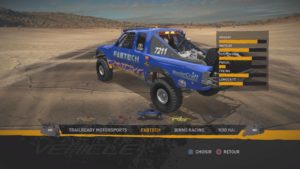 Then the races follow one another, with other vehicles managed by the AI ​​or just between the real players. In multiplayer, the races are always very long, with only one lap, and we constantly found ourselves in desert landscapes. There are generally very few, if any, barriers, and the indications on the road to be taken are minimal, so you have to follow the tracks of the vehicles so as not to leave the track and lose precious seconds. Not to mention that there is no map to navigate. 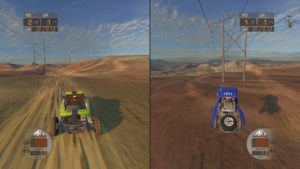 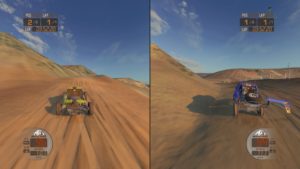 When you leave the track, a sign indicates the direction of the track for a few seconds then, if you continue to wander, after a small countdown, the vehicle is brought back automatically on the track, but slightly behind so that it is not advantageous. If necessary, pressing the two L1 + R1 will bring the car back on the right track without delay. We are both on the left off-piste, while on the right he has 5 seconds to find the trail before being teleported. 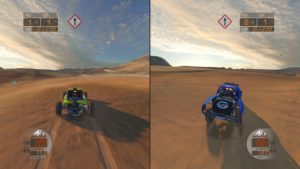 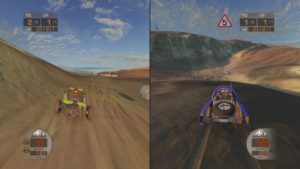 During collisions with other vehicles, the damage is immediately visible, my buggy thus lost its bodywork during a too violent pileup caused by my angry opponent, which would have made me lose my sponsors' money (if I 'had some stuck on my lost pieces). And this 4x4 has its door dislocated. Depending on the damage, this can directly impact the performance of the cars, in particular when it concerns important parts, such as the clutch which can release if it is too stressed and thus lose acceleration. 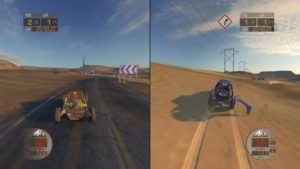 At the end of a race, the scores are displayed with the summary of the best lap time, and the total time added. We weren't very brilliant in this race, we have to admit it! 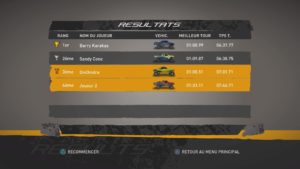 For single players, there is Race Mode and Career Mode, both played exclusively solo. The race mode does not seem to be very different from the multiplayer mode (with the difference that it is therefore played ... alone!), Unlike the career mode offering small challenges to chain. When launching this mode for the first time, the difficulty is configurable, as well as the units (a good thing to have thought about it!). 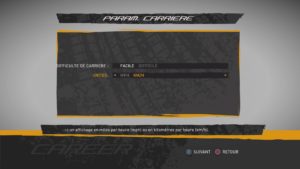 Then different leagues are accessible. Without much research, I started with the first one, thus offering me a large choice of buggies, then inviting me to complete three races on three different tracks. 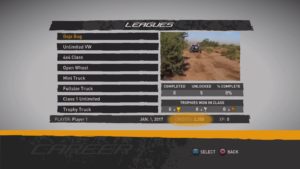 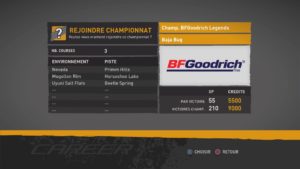 The principle is then exactly the same as in multiplayer races: to be the first while avoiding collisions with the scenery or other vehicles as much as possible, while of course making sure to follow the track. The races here are much shorter and more dynamic, in a more varied setting. Off-piste is absolutely not allowed here and you must not leave the track for more than a few seconds where the game places me with a bonus time penalty! 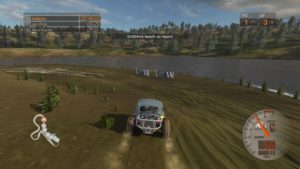 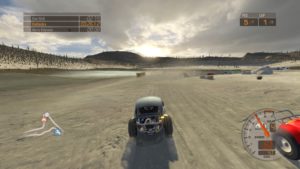 The key to advancing in the career, new vehicles! 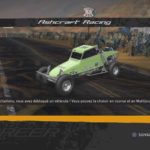 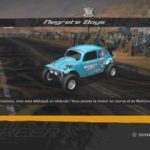 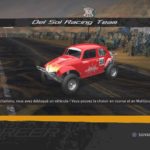 And here are two of those three races captured on my PlayStation 4 (note that the sound does not work, so I added music to the montage that is not representative of the title):

On the graphics side, the title has nothing to envy to recent games, the remaster is successful, it's pretty and fluid without any slowdown or drop in FPS. On the physics side, whether it's collisions between vehicles or responsiveness in corners, there's nothing to say either. The gameplay is easy to pick up in a few laps, with a welcome little arcade feel. Moreover, even if the number of buttons to use on the controller is a little scary at first, it is quite possible to be content to accelerate and brake, it works in most situations!

On the other hand, I was quite disappointed with the repetitiveness of the multiplayer races, it is continually the same style of deserts, with a single incredibly long lap, regardless of the game mode chosen, so much so that we do not always have finished, tired of traversing these eternal expanses of sand. It's done well, sure, but I was hoping to also find in multiplayer the fast and fun races of the career mode. Because, on this side, the diversity is really there and each circuit is a beautiful discovery, between muddy paths and fairground rides.

Finally, for the sound environment, it will be impossible for me to decide, past the menu, no sound. However, I regularly have announcements on the screen giving me the title of the current song ... but nothing. It's a shame because beyond the music which generally gives a welcome rhythm in the races, I don't have any engine noise or crumpled bodywork. It makes you lose immersion, I hope they will quickly correct this bug!

Despite everything, Baja: Edge of Control HD does not have to be ashamed of this new version, the game is not looking its age and undoubtedly still has good years ahead of it, whatsoever on PlayStation 4, Xbox One or Steam:

Add a comment from Baja: Edge of Control HD - A new lap for the racing game