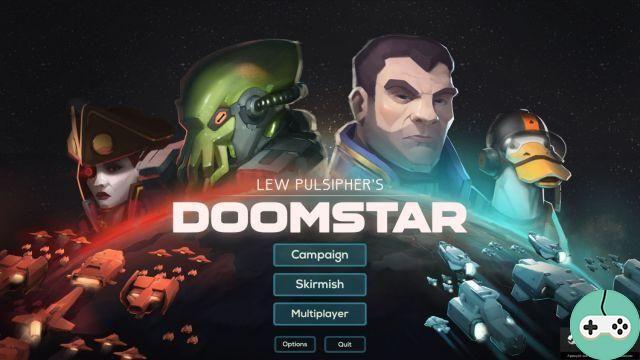 Doomstar is a virtual board game, created by veterans of the genre, but in their physical versions, having notably to their credit Britannia, Dragon Rage or Sea Kings. So what is their video game released on September 16 worth after a short early access phase? That's what I went to find out!

At the start of the game, three modes are available: campaign, skirmish and multiplayer. I first opt ​​for the campaign mode, in order to learn the basics. And you have to go through that because, as you will see later, there are a lot of elements to understand to properly manage your fleet and ensure victory. It would be a waste of time to face experienced humans directly. 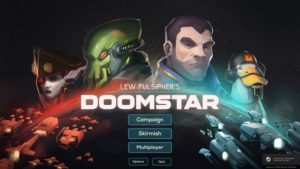 Campaign mode comes in the form of four major stages, each with a different opponent to face: Admiral Ivar, N'kung, Captain Londi and ... Daniel, the duck! The first is an extremely simple tutorial, the other three are of increasing difficulty, although they do not require much thought, the computer being quite stupid in its decisions (and above all repetitive, which allows it to be beaten after a failure by remembering his choices). 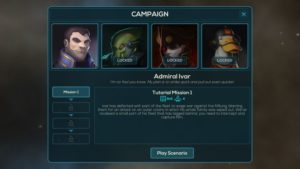 Each mission begins with a small speech explaining the specificity of the mission and what will have to be done to win. Of course, these are just a few strategic tips, nothing mandatory. Then we discover the ships, the fleet is not the same each time, new units are indeed revealed, increasing the possibilities, both on our side and on the opposite side. In all, these are 9 different ships (I indicated in parenthesis their attack power): 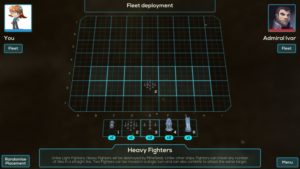 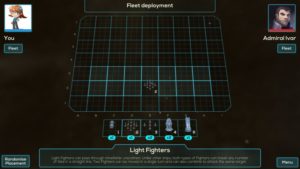 And, of course, there is the command ship with attack 1. It is this vessel that conditions victory, or defeat. It can only advance one square per turn and is therefore vulnerable to all of the other enemy ships. 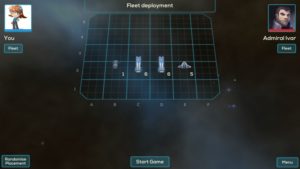 All units can be placed freely at the start of the game in the highlighted rectangle at the bottom of the screen. Placement can be done more quickly by taking the last placement used or by opting for a random placement for the more reckless. It is of course necessary to take into account the protection of the command vessel (preferably with mines) as well as the lines of the hunters (it is necessary that two hunters are on the same line to be able to help each other). Remember also that the Negasphere cannot be placed near a black hole. The perfect opportunity to talk about these important gameplay elements that allow you to travel greater distances thanks to their attraction. Thus, a hunter can cross the entire map in one turn. Convenient ! 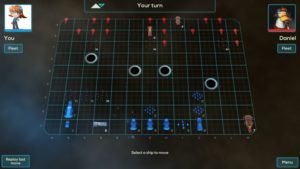 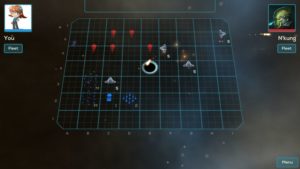 All enemy ships are initially hidden (and conversely, the enemy has no vision of our units), so we don't know where the enemy command ship is, nor the minefields and the big bad Doomstar. A share of luck comes into play because everything can go very well by avoiding the minefields, or even falling almost immediately on the enemy command ship. While on the contrary our fleet can be decimated by unfortunate encounters. The resolution is done very simply: when two ships are in conflict (= on the same square), the one with the highest attack value destroys the other. In the event that both ships have the same value, both ships are destroyed.

Suddenly, a game of cat and mouse begins between the two fleets. So where is the enemy command ship? Sometimes it comes down to a good strategy. Sometimes it was a fluke. At the end of a game, it is possible to reveal the position of enemies, a fun way to end the game by seeing what you missed! 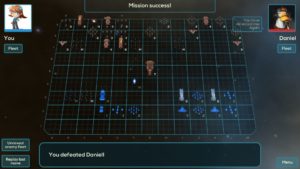 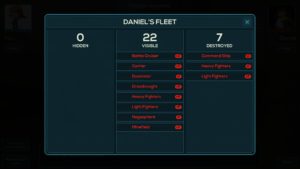 In skirmish mode, it is possible to face one of the four enemies of the story mode in standard mode (19 ships) and full (29 ships). 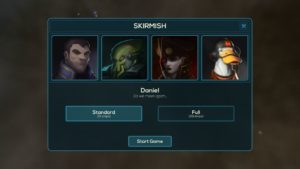 Finally, in multiplayer mode, it is possible to join a game with friends, against other random players or as a spectator to observe matches. 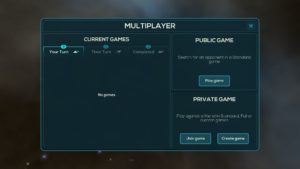 Funny, Doomstar unfortunately suffers from its rules which give too much to luck. Suddenly, despite a good strategy, it is not always possible to win, quite simply because the bad moves follow one another. Against friends, it will turn out to be a good board game, an alternative when his friends are far away and cannot come and play a game on the table!

Add a comment from Doomstar - A virtual board game