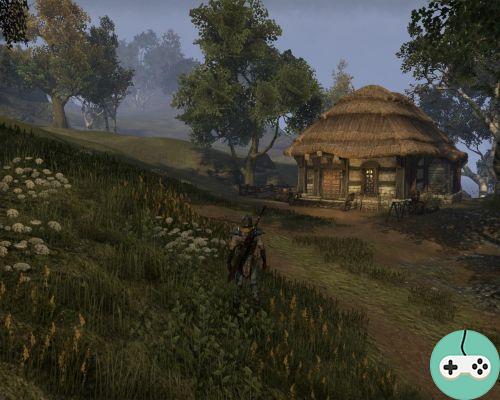 Many people see Cyrodiil as a huge battleground dedicated to PvP, as opposed to PvE in Alliance Territories. But if you take a closer look, you realize that while the danger of an enemy presence is real around every bend in the road, there is life, quests, exploration, resources, and more. very PvE intrigues even within this PvP zone! 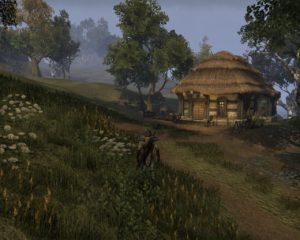 Some rules for "tourism" in Cyrodiil

The territory of Cyrodiil is divided into three major sections, each initially controlled by one of the alliances. Obviously, military movements greatly alter the danger or safety that a player may encounter while exploring. The trade routes of a locality are patrolled by soldiers of the alliance who own the nearest fort. You must therefore be very careful to avoid roads if you are walking in enemy territory.

The central area of ​​Cyrodiil, where the island of the Imperial City is located, is completely inaccessible, the access roads are blocked, the bridges cut and a huge fixed black anchor dominates the whole city and begins to tow the infrastructure slowly towards On a lesser scale, so is a famous fortress north in the mountain range bordering Skyrim, which is ruled by a massive, infested black anchor of Dremora in full armor and other Daedra from elite .... This is the Temple of the Cloud King (Cloud Ruler Temple), a name that will appeal to history buffs as it is the historical headquarters and stronghold of the Emperor's Blades. What interest does Molag Bal have in putting the package against this stronghold? The main plot will surely teach us ...

Apart from these two places and obviously off the beaten track of the war of alliances and forts, there will be five main centers of activity, important towns or villages:

In the map below we can see a non-exhaustive inventory of many PvE interests (in white) in Cyrodiil. 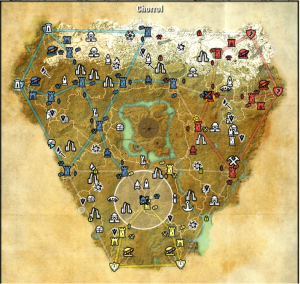 What PvE activities in Cyrodiil?

Apart from the cities, which provide many quests requiring you to go to other cities (which represents a certain danger ...) we will find several Ayleid ruins, or some farms or wineries, black anchors, "abandoned" forts, mundus stonesbut also public dungeons or encampments of various PvE enemies (werewolves, vampires, daedra, or other abominations)

I personally haven't found an instantiated dungeon in Cyrodiil, but it doesn't say there isn't at least one. Indeed there are supposed to be 16 dungeons in all, there are 5 zones per alliance, so that would make 15 + 1 in Cyrodiil logically unless it is in Ice Haven? However, the presence of an instantiated dungeon in an area dedicated to PvP would be paradoxical, as it would represent a secure anti-PvP PvE area ...

If you're not really into PvP but still want to participate in the alliance war, no worries ! Within the headquarters of each alliance, there are repeatable thematic quests. One of them offers tocarry out reconnaissance missions in enemy territory which consists of going discreetly to one of the enemy fort's resources, waiting a few seconds without being detected and returning to report to HQ ... It is relatively safe if you are good at sneaking around.

Also note, the Cyrodiil map for TESO looks like a perfect triangle while the actual geography of Cyrodiil is very different! Cyrodiil, since the creation of the province by Reman Cyrodiil I, extends much further west with the Colovie and the Gold Coast, and to the south-east with the Black Wood which adjoins the province of Marais Noir.

Will we see these regions in the future? Colovia, a state in its own right, from which Reman Cyrodiil I was issued, will it be an opponent of the province of Cyrodiil, mainly Nibenaise in TESO, in future expansions?

add a comment of ESO - Beta - PvE in Cyrodiil