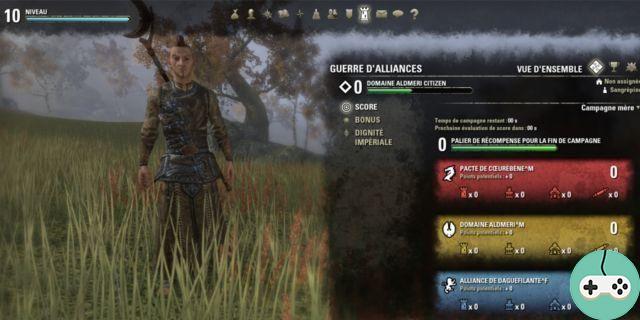 My level 10 Wizard Bosmer, and I traveled to the Gates of Elsweyr to witness the PvP campaign in Cyrodiil. Here is a return of my impressions of the central territory of Tamriel.

Access to Cyrodiil is from level 10, you can then open the campaign window which is divided into three sections: an overview summarizing the scores of each alliance, the bonuses collected, information on the Emperor and a ranking of players conducive to becoming one. Then it is the ranking which brings together the top twenty players with the most alliance points, all factions combined. The last section is reserved for current campaigns, it is through this last tab that you can enter Cyrodiil to participate in the PvP campaign.

Once the loading screen has passed, the player finds himself at the gates of Elsweyr for members of the Aldmeri Estate, at the gates of Morrowind for the Ebonheart Pact, and at the gates of High Rock for the Daggerfall Alliance. Immediately, the player is offered a line of quests that will allow him to understand the mechanisms of fort attacks, handling siege engines ...

However, the possibility is left to the player to keep this quest line aside and go directly to the front, the journeys to get closer to it being simplified by the transit altars which allow transit between all the forts under his control. faction.

On this map of Cyrodiil we have a representation of the advance of the campaign, the Domain (in yellow), has a slight lead because it controls four of the six forts surrounding the Imperial City. The towers represent the forts, each of them surrounded by three symbols depicting the sawmill, mine and farm that supply the adjacent fort. 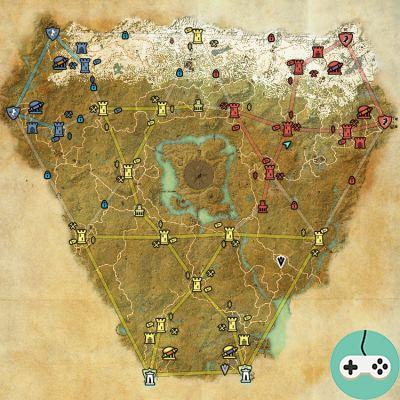 The temples on the map, identifiable by the scrolls above their icon contain one Scroll of the Ancients each, possession of a scroll gives a power bonus to the faction that owns it, plus a faction has scrolls, the more powerful it is, which explains in particular why the Domain owns a large part of the forts of Cyrodiil because it has managed to steal and keep all the Scrolls for a fairly long period of time.

The Scrolls of the Ancients are divided between the Factions, each alliance has two at the base:

When a Scroll is stolen, its carrier and position become visible to all players of all factions present in the campaign, and a server message is sent to all campaign participants, whether in Cyrodiil or elsewhere. From then on, a "flag race" began.

Exploration in Cyrodiil is enriched by the presence of hostile creatures and NPCs, the player will regularly encounter level 50 vasards or zombies although he is only level 10. This is explained by the fact that during the When the player enters Cyrodiil, his power is increased so that if the level 10 player faces a level 50 zombie the combat will be balanced and the player will not be exterminated at once.

It is impossible for a single player to take control of a fort or one of its satellites, each location that can be captured is guarded by a minimum of ten NPCs, not to mention a handful of soldiers around the point of capture. , represented by a standard, so that the player cannot try to infiltrate to capture the fort without a fight.

I will therefore end with my impressions: after accessing the current campaign, I decided to follow the beginning of the tutorial quests, where I had to learn how to shoot with the three types of siege engine (ballista, trebuchet and catapult) then repair one.

Next, I teleported to one of the four forts that were under the Aldmeri yoke, near the Imperial City, and headed for Ebonheart Pact territory to see how far I could go before I was killed by enemy players or NPCs. So as I was moving deeper into the “red” zone, I came across farms and mines of the Pact and I quickly realized that wanting to capture one of its buildings alone is impossible, I went back to the North. Is leaving two corpses of NPC workers behind me.

This is how I arrived a few tens of minutes later at the doors of an alliance leading to the temple of a Scroll of the Ancients, obviously closed and before disconnecting I was able to have a quick contact with a group of my Faction (the Domain) heading towards the Temple to steal the last Scroll that was not under Aldmeri control.

In summary I am rather satisfied with my general experience of the game, from the point of view of the respect of the geography of the territory of Cyrodiil compared to the game Oblivion we can say that we find the key places of The Elder Scrolls IV (the Temple of the master of the Clouds north of Bruma, Cheydinhal to the east ...)

And you, what will you want to discover while browsing Cyrodiil?


Do you want to be up to date and know all the tricks for your video games? In gamesmanagers.com we enjoy playing as much as you do and for that reason we offer you the best tricks, secrets or tips for you to play non-stop. We offer you quality content and always updated to keep you up to date. That's why, in our website, you will find not only videogame guides but also tricks, secrets and thousands of tips so you can play to the limit. Are you ready to get it? Enter now and enjoy your videogame!
SWTOR - Summary of the livestream ❯

Add a comment from ESO - Beta - Stay in Cyrodiil