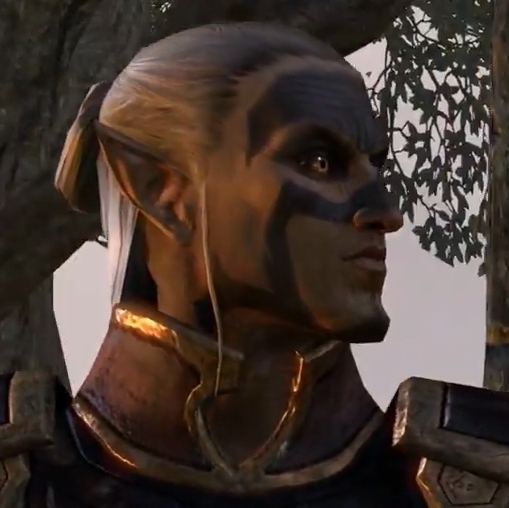 Since the announcement that Elder Scrolls Online was in development, numerous gameplay feature films have been released by Zenimax.

The most famous are :

With the help of these videos we can clearly see the visual progression of the different races of player characters as well as the textures of armor. Some breeds benefit from more shots than others and so we focus here on the ones that stand out the most:

As of June 2012, the characters were still quite rudimentary and crude, and lacked HD textures for their armor, which again was quite simplistic.

It may be noted, for example, that the features characteristic of the dark elves of Tamriel such as red eyes and fairly marked browbones / forehead have been retained in the latest versions (not as much as in single-player games, which will sadden some of us and will delight others!)

No huge changes over time, or at least noticeable, for this breed, other than the appearance of manes or "fur" textures that seemed nonexistent at first. It also seems that it is possible to customize the feline type of his character (rather cat, or tiger, or lion)

the images that we see of the Nordic teach us especially about the evolution not of the race but of the quality of the armor. Indeed between June 2012 and October 2013, the quality and the degree of detail of Nordic heavy armor made a huge leap forward!

Like the Nordic, the evolution of the faces seems quite minor, on the other hand, the smoothness of the heavy Altmer-type armor as well as the metal textures have been significantly improved.

This race, just like the Dunmer, was almost completely remade between the first film of E3 2012 where the Argonians look like harmless humanoid lizards or "aliens", to diversify into a variegation of reptilian types of all sides with horns. and bony arches of all kinds and varieties of scales. We will also note the passage from a rudimentary armor again to a much more detailed stylish armor.

Without doubt the breed that scared me the most when I saw the first film in 2012, and which reassured me the most when I saw the following films. Indeed, the initial orcs seemed to come straight out of ... Azeroth or something like that, with small heads and a massive oversized body with disproportionate hands or feet. Some people like it, I'm aware of it, but it's totally at odds with the canon of the Elder Scrolls franchise which, I recall, says that orcs were originally Elves, and for some have nothing lost to their ancestral culture; it was therefore necessary to be able to give the possibility of playing these "civilized" orcs ... As regards the armor, heavy in any case, the orcs being among the best blacksmiths of Tamriel one will not be surprised of the very positive evolution well that of a rather "raw and functional" style. 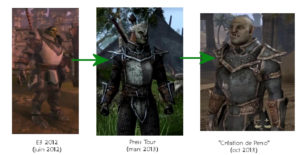 What do you think ? Which breed has changed the most in your opinion?

add a comment of ESO - Graphic evolution of characters