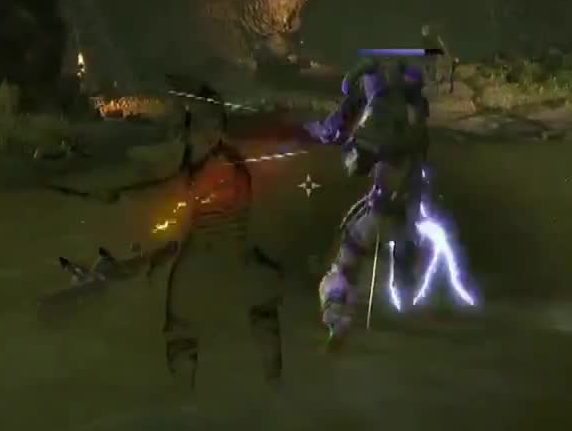 There are many questions about how stealth works in practice in TESO.

Unlike the classic Elder Scrolls, the fact that we play with and especially against other players raises several problems. Through the published articles, interviews and demonstrations, we can now respond to a number of them!

Visual appearance of a stealthy character 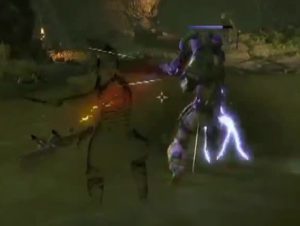 As shown in the screenshot above, taken from the 2013 Quakecon demo (around 17:20), which illustrates the use of the Blackblade skill "Shadow Cloak", the invisibility in close combat looks like a version translucent similar to most spaceship camouflage tech in sci-fi movies. In short, nothing but very classic.

The question that we cannot answer for sure at this time is whether in PvP any character enemy, stealthy or invisible, will have this appearance there (which makes it detectable with a minimum of careful observation of the players) or if it will be totally blended into the background and will imperatively require the use of the Magelight skill (we will come back to this more late)

Stealth is one of the actions that consumeendurance (same as parry rolls, blocks, interrupts, heavy attacks or crowd control escape attempts). It is therefore not possible to wander constantly in a stealthy way because when you run out of stamina, you will come out of your stealth.

As in the single player Elder Scrolls, stealth is acquired when crouching. Stamina is only consumed if we move stealthily, standing still does not consume anything.

Not only does active stealth allow you to approach enemies (PvE or PvP) undetected, but it also provides bonuses on hit. There are skills that allow you to take advantage of stealth or invisibility, whether it's when landing a blow or just after taking one in a stealth way.

L'invisibility differs from simple stealth in that it cannot be triggered only by special skills and has nothing to do with crouching down to hide and be stealthy.

In the context of magical invisibility, it will surely be possible to move at normal speed, without loss of stamina and to strike without necessarily reappearing BUT the duration will be very short. The skill to make oneself invisible will cost magicka instead of stamina.

To this day, we just know that only the class of Black Blade has invisibility skills (in his "Shadows" tree).

Optimal classes and skills for stealth

Several skills allow you to take advantage of stealth or simplify its use.

Among the 4 classes offered, only that of Black Blade (Nightblade) offers skills, both active and passive, improving stealth or allowing to be made invisible. the site Tamriel Foundry relates the skills of the Black Blades, here is the list of those concerning the stealth:

Moreover, themedium armor skill tree is intended to improve your stamina management and stealth related matters. You will therefore find in this tree something to regenerate your endurance more quickly in order to compensate for the expenditure of vigor in general (passive skill: "Wind Walker") or passive skills to increase your stealth rate. (passive skill:"Improved stealth")

Finally, racial trees are likely to feature passive skills to enhance the regeneration of a particular trait, but we don't yet know which breed will specialize in vigor in particular.

How to detect stealth?

As we said earlier, we do not yet know if the stealth / invisibility of an enemy is detectable with the naked eye with a minimum of observation (see the image above of a camouflaged character). It would seem reasonable for stealth, but illogical for invisibility.

What we are sure of, however, is that by joining the Mages Guild and to progress a little in reputation with them (via quests or missions), any player will be able to unlock the active skill "Magic Light", to assign him a skill point, in order to be able to activate the stealth / invisibility detection.

The details of how this skill works are not yet known but we already know that it isinvocation of a light that can detect people concealed on a shelf around the character invoking him.

Are you a fan of stealth? Is Lame Noire for you?